Home The Baddest Hummer on the Planet

The Baddest Hummer on the Planet

There is no denying the allure of a Hummer. They might’ve come with the undesirable 6.2L and 6.5L IDI’s back in the day, but the looks, capability and wow-factor of the military-derived H1 make it infinitely desirable. And for Steve Ortner, a longtime fan of the H1 who has amassed a small collection of them, replacing the original underpowered oil-burner isn’t a problem. In addition to his vertical wall-scaling, Cummins-powered 2-door and LSX 454-equipped versions, he just finished reworking this ’94—and the diesel industry is rightfully on fire about it. The menacing Hummer sports a 12-valve Cummins with a 6.7L block, a 14mm P-pump, big compounds, and makes somewhere in the neighborhood of 1,500 hp. The 36-inch paddles say it’s a regular at the dunes, too. Trust us, this Hummer is king of the sandbox.

A ragged-out, beat up Hummer when he obtained it for just $12,000 from its 20-something previous owner, Steve’s ’94 has been a work in progress for many years, and he’ll be the first to tell you that one thing led to another until the build snowballed out of control (in a good way). Now, his work-of-art not only serves as a means of scaring any passenger brave enough to climb aboard it, but it’s also the ultimate advertising tool for his company, Mountain Machine. “It’s a rolling business card,” he told us. “You can see what we did here with the Hummer, which means we can do your custom fab and machine work, too.”

When you’re looking to make four-digit horsepower, it pays to start with a solid foundation. For that, Steve took receipt of a 6.7L Cummins block from Hamilton Cams. To avoid having to wait around for the engine to cool down, he went with Hamilton’s water jacketed version. Sticking with other prominent names in the industry, forged-steel rods were sourced from Wagler, the fly-cut, billet-steel pistons came from Diamond Racing, and Hamilton’s 188/220 camshaft got the call for valvetrain operation. ARP 14mm main and head studs are also employed, as are the company’s ½-inch rod bolts. A worked-over 12-valve head—treated to CNC porting, oversize valves, and an individual runner intake manifold—allows the Cummins to breathe freely. 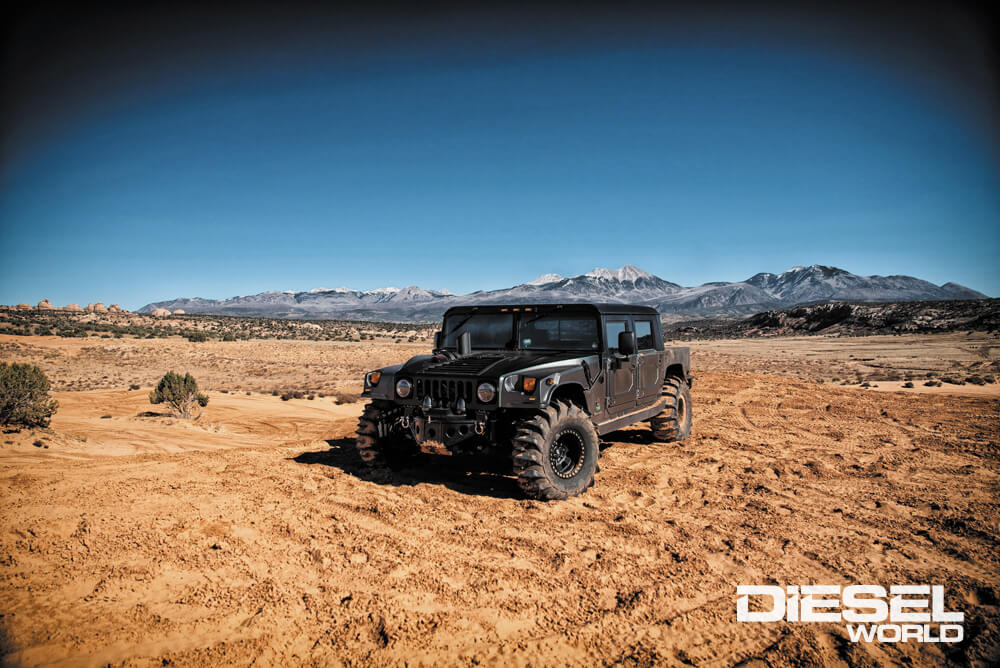 While the Cummins initially made 1,200 hp on Apex Turbo’s engine dyno—an apparatus that usually sees big cube, mega-horsepower tractor engines—that number was achieved before the 14mm P-pump and water-meth were in the mix. EGT increased to a toasty 1,800 degrees, too. Now, EGT seldomly crests 1,200 degrees and a boatload of fuel is on tap. The way things sit at the moment, Steve believes the engine builds 1,400 to 1,500 hp.

To integrate the mechanical Bosch P7100 to the 6.7L block, Steve designed and manufactured his own billet-aluminum gear housing for the front of the Cummins. And not only does the cosmetically-pleasing cover accommodate a 14mm P-pump from Farrell Diesel Service, but it also includes a provision for running a gear-driven fuel supply pump, which in this case is a high-flow unit from Waterman Racing. Downwind of the big P-pump, Steve runs a set of dual-feed, 5x.025 injectors from Scheid Diesel, which receive plenty of fuel courtesy of six .120 injection lines, also from Scheid.

As if the injection system wasn’t serious enough, the turbo arrangement takes things even further. Not only does the atmosphere charger stick halfway out of the hood, but the Apex Turbo-built charger conceals a 110mm compressor wheel, along with the company’s hub-free design for optimum airflow. On the Steed Speed T-6 exhaust manifold, an 86mm S400 brings the two-stage setup to life. To cap boost at 70-psi, dual 45mm TiAL external wastegates are plumbed into the system’s hot-pipe. Intercooling comes by way of a Frozen Boost water-to-air unit, with the ice box and circulator pump located in the rear of the Hummer. 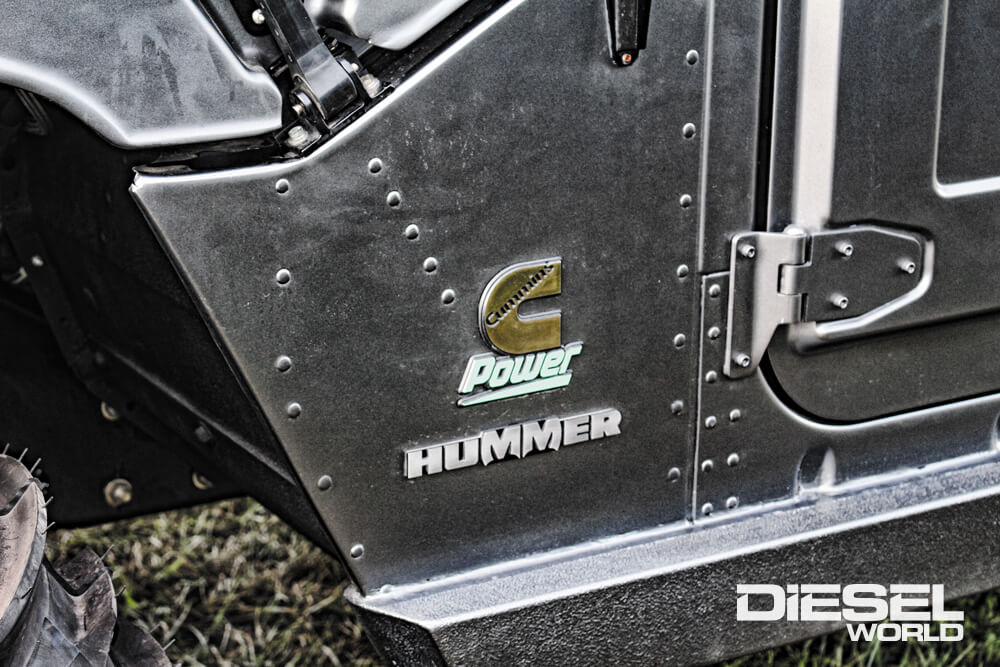 Many are surprised to find that Steve retained most of the H1’s original suspension and driveline. The front and rear independent suspension, AMC 20 axles and geared hubs at each corner are all stock, as is the factory 242 AMG transfer case underneath. The only forced differential upgrade thus far has been the addition of a front ring and pinion from Yukon, with the rears being swapped at the same time. To help navigate the dunes more comfortably, Steve installed coil springs and shock absorbers from Rod Hall Racing, but he original upper and lower A-arms survive. As for the transmission, Steve stuck with the 4L80-E, but for obvious reasons it was thoroughly reinforced to handle the Cummins’ power. Accurate Transmission pieced the four-speed together with billet shafts, an 1,800-rpm stall converter from Yank Performance, and a full manual valve body.

Catch Him At The Dunes

So why is Steve so big into Hummers? “I was into square body trucks for forever, but I always thought of a Hummer as the quintessential American truck,” he told us. “I mean, it’s the John Wayne of trucks.” It’s pretty hard to argue with that, and it’s even harder when you’ve got a 1,500hp beast like this in your stable. This summer, Steve plans to terrorize Silver Lake Sand Dunes with it, along with hauling it to the Ultimate Callout Challenge in Indy. If you find yourself at either of these two locations this summer, be on the lookout for the baddest Hummer in the land. It’ll be the one with a hood stack and a massive turbocharger peeking through the hood… 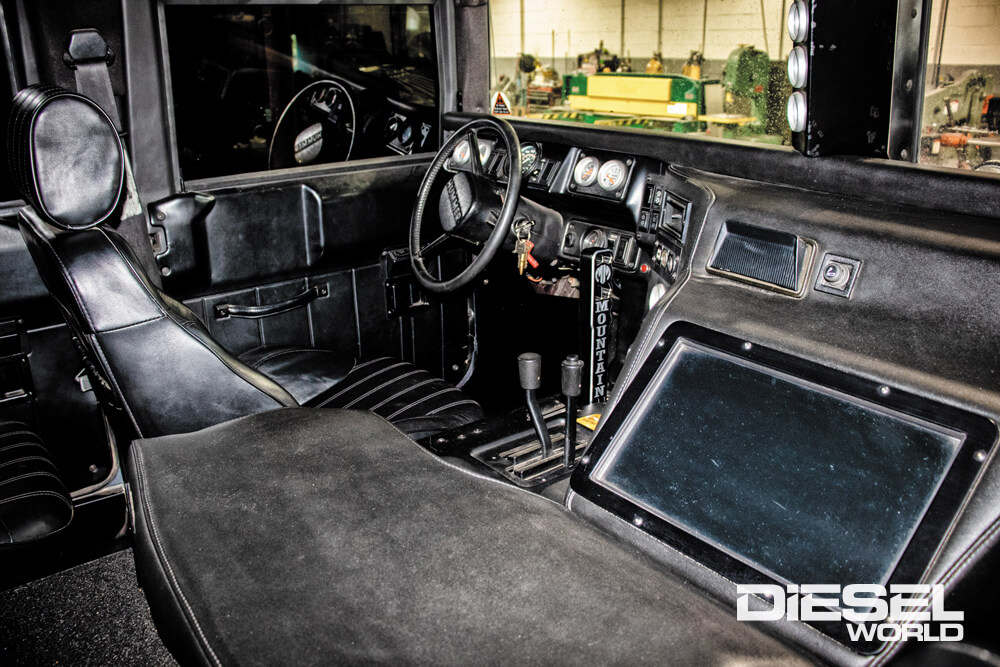 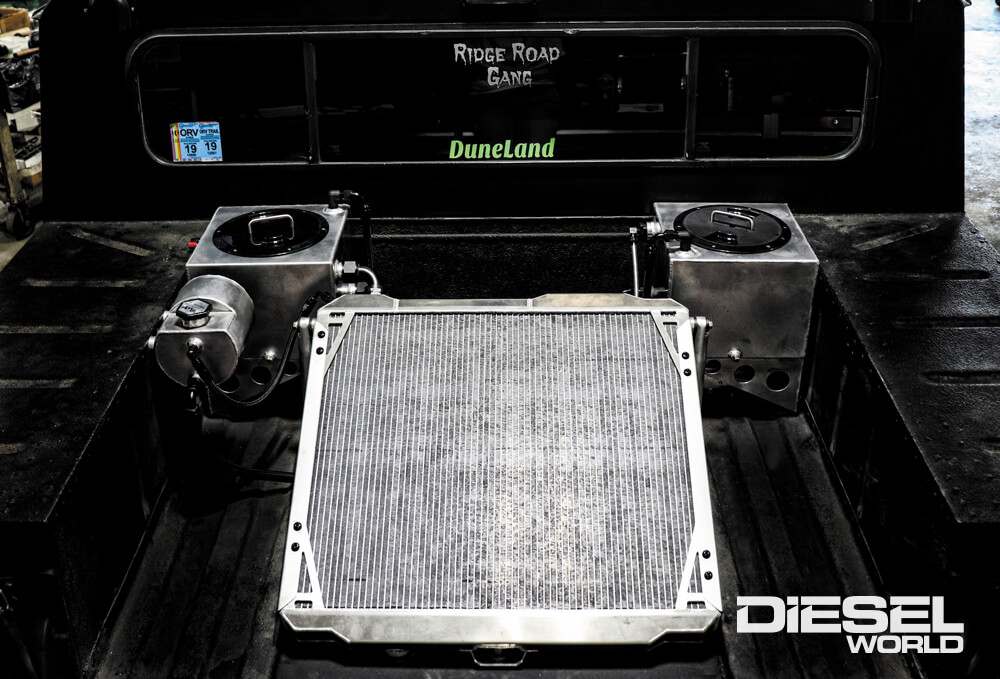