Kenny Bruner’s ‘06 Dodge Ram is unquestionably over-the-top. From the bright paint and tilt front end to the big-horsepower engine and partial tube chassis, Kenny built his truck with one purpose in mind: to compete in the Ultimate Callout Challenge. “I really liked the idea of building a UCC truck,” says Kenny. “In addition to those types of events, I can still do dyno events, and when I can’t sled pull I can drag race. When I can’t drag race, I can pull. You can just use the vehicle for so many things,” Kenny continued. While he’s owned the truck for a few years, in 2019 things got serious, and the Ram went through a complete transformation.

Kenny knew that in order to compete in the drag racing portion of UCC, the truck needed to be light, so he put an immense amount of time in that area. “Once I went to a Hamilton Cams solid block, I knew I wasn’t going to street drive it anymore, so I could go full race truck with my build.” After saving up his nickels and dimes for a couple of years it was time for the full fiberglass and Lexan treatment. All four doors, the custom front end, and rear bedsides are all GTS fiberglass parts. They’re also removable for maintenance purposes, and to switch the truck from pulling to drag trim and back. The interior is long gone and was replaced with a single Kirkey racing seat and PRP seatbelts. A host of autometer gauges made their way into the truck, as keeping an eye on the powertrain was still vital. Kenny even went as far as to make a tubular rear frame for the Ram out of .083 wall 1 5/8-inch chromoly tubing that’s both light and strong. The fruits of his labor came when the truck crossed the scales at 5,250 pounds–incredibly light for a 4×4 diesel.

With a solid platform to race on, it was time to make horsepower. Part of Kenny’s savings effort also involved building the engine he wanted; in this case a high-revving 6.7L-based powerplant with a 5.9L crank, which ended up at 6.5L of displacement. The bottom end is considerably stout, with an Industrial Injection Gorilla Girdle, Carillo rods, Diamond pistons, and ARP 14mm head studs. A Hamilton cam with 207 degrees of duration on the intake and 220 on the exhaust bumps Manton pushrods, which in turn moves the valves on a fire-ringed head from Freedom Racing Engines. Almost every part of the longblock has been changed, from the Banks side-draft intake to the Fluidampr balancer.

Kenny has always favored compound turbos for their high-boost potential, and the setup on his drag truck is no different. The “smaller” of the two chargers is a 76mm S400, while the big honker is a 91mm S500. Both combine to blow through a Banks intercooler and are wastegated at 80psi of boost with a 45mm Turbosmart wastegate. On top of all that air is a progressive Maximizer 5 kit from Nitrous Express, that features a huge .178 orifice solenoid. For fuel, Kenny started with enormous 400-percent-over injectors from Dynomite Diesel Products, along with twin 12mm stroker pumps from DDP that are mounted with a Fleece Performance kit. The truck is tuned by Kenny himself, through EFILive software.

Making all the power in the World won’t do any good if you can’t get it to the ground, so Kenny spent a lot of thought and time on the transmission. In an interesting move, Kenny had the wiring harness completely redone by Gray’s Performance to get rid of anything that might throw a trouble code. The rest of the transmission was also completely rebuilt and upgraded with an HTS valvebody, Alto red clutches, TCS shafts (aermet input, intermediate, and phat shaft output) and Sonnax servos. The final step was a 2,400-rpm stall converter from DPC that Kenny states he’s “…never, ever had a problem with.”

Although Kenny already had a host of 10s and 9s under his belt before the truck’s body and chassis transformation, we were still excited when it rolled off the trailer for its debut at Truckmania 2020. The bright orange Dodge (freshly painted by Healdsburg Collision Center) didn’t disappoint, as he got his 9-second NHRA license running 9.60s at 138 mph on fuel only. During a night test session he turned on the nitrous, and with “only” a 0.085-inch jet on a 3-second ramp, he dipped into the 9.30s at more than 145 mph! Although dragstrips are now closed for the season, Kenny is more than prepared for an assault on the 8-second zone next year. Oh, and he still sled pulls! He put the custom 4-link lockout and drawbar setup to work, where he pulled in the Open class at the very same event. While UCC has been postponed for the year, Kenny is already gearing up for the qualifiers next year where he’s shooting for the big show. Kenny is the first to admit that he owes plenty to CGT Diesel and Allied Diesel, along with his wife, kids, Dad, and crew. The fact that he fabricated nearly everything on the Dodge however, definitely showcases what one person with a lot of dedication can do! 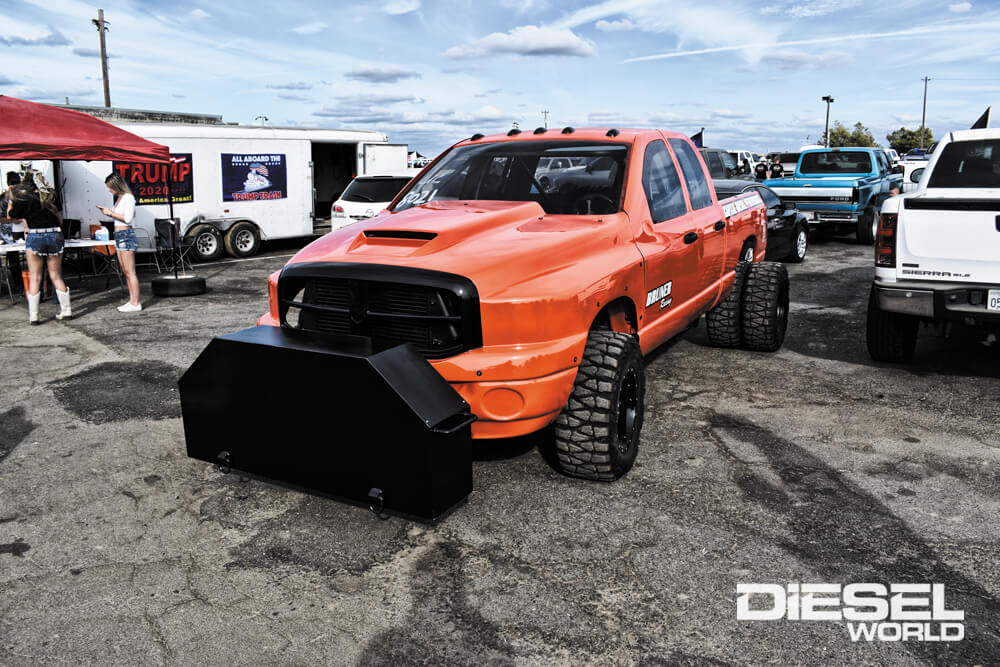