It’s not often than you run across a diesel-powered vehicle that’s unlike any other, yet that’s exactly the case with Weaver Customs’ ’70 Cuda. Nicknamed “Torc” (for obvious reasons), the 6.7L-powered Cummins Cuda is a unique blend of a high-end show car, muscle car, and a diesel drivetrain swap.

When looking over the car, there are no spots where we could find any body errors, turbo oiling or exhaust issues, or diesel clearance problems. Randy Weaver clearly thought this one out from the get-go when he began on his newest creation.

Although its lines clearly define it as a Cuda, the amount of body modifications performed was staggering. Beginning with a less-than-perfect donor car, Weaver started by angling the windshield back about an inch, and then dropping the roofline down about an inch and a half. The rear window was also flush-mounted, and custom front, side, and rear spoilers were added to give a clean and low look. Virtually everything on the car has been smoothed, and some items like side-view mirrors didn’t even make the cut. The hood is one of the most highly modified pieces, and features twin radius for the larger turbo, as well as a full-length cowl induction scoop that runs past the cowl and all the way to the windshield. 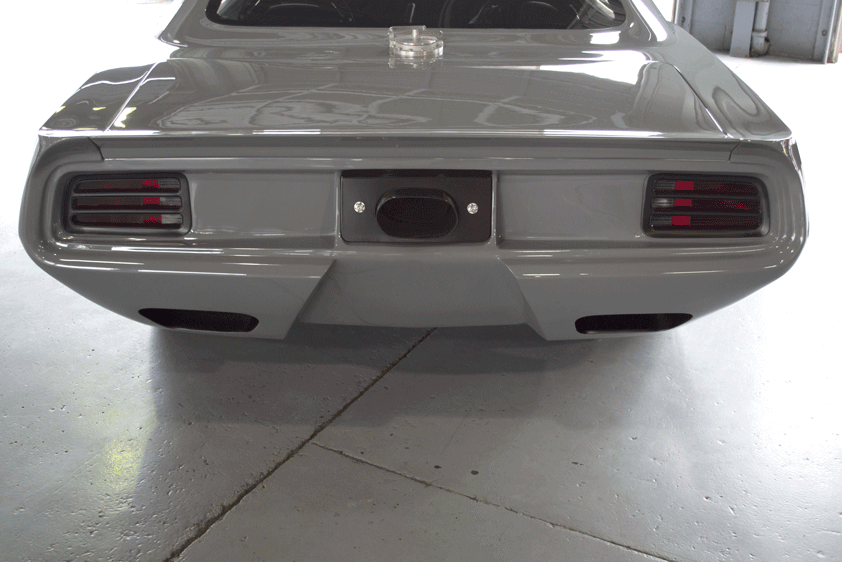 Opening the hood reveals an exquisite engine bay that features just as much detail as the outside of the car. While most diesel muscle cars follow a “hack it up, stab it in” mindset for the build, Weaver’s Cuda has an inner engine compartment that is carefully crafted and flows in and around the natural contours of the diesel engine. The custom inner fenders fit tight and neat, and curve with the turbos and charge pipes back into the recessed firewall. The front radiator support is enclosed completely, and it’s hard to even tell how far the engine is set back until you look at the headlights of the car.

With his metallurgical work of art as a starting point, Weaver needed a diesel engine that would match the Cuda’s classic style. With its decades of development and performance roots, a 6.7L Cummins diesel was the perfect platform. Since the car was going to be called Torc, the diesel powerplant needed to fit its billing. That’s why instead of making a pedestrian 350-ish horsepower, Weaver’s 6.7L makes closer to 1,000—1,500 with nitrous. Torque is also off the charts, estimated to be in the 2,000 to 3,000 lb-ft range, depending on how soon in the powerband Weaver hits the giggle gas button. 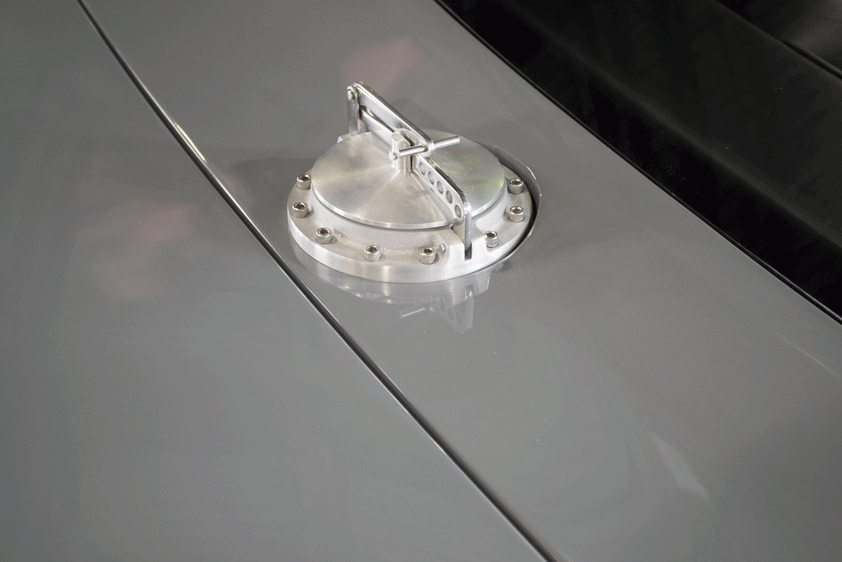 “THE AMOUNT OF BODY MODIFICATIONS PERFORMED IS STAGGERING”

The block and crank are factory Cummins pieces, but that’s about where stock ends. Spinning on the crank are connecting rods from Carrillo along with Mahle pistons; a Hamilton cam actuates the valves. The cylinder head was fire-ringed and secured with ARP 625 studs. It has had the intake shaved off, and a sidedraft intake and matching valve cover were installed. The turbos are described as a “big” 66mm S300 mounted on a Steed Speed manifold, and an “even larger” 80mm S400 that combine to send 80 psi of boost through a Mishimoto intercooler. Fueling begins with a custom tank that feeds a Fuelab lift pump, and then sends fuel through a PPE Dual Fueler kit to Industrial Injection race injectors. Tuning is handled by Gorilla Diesel through a factory ’10 Dodge ECM. 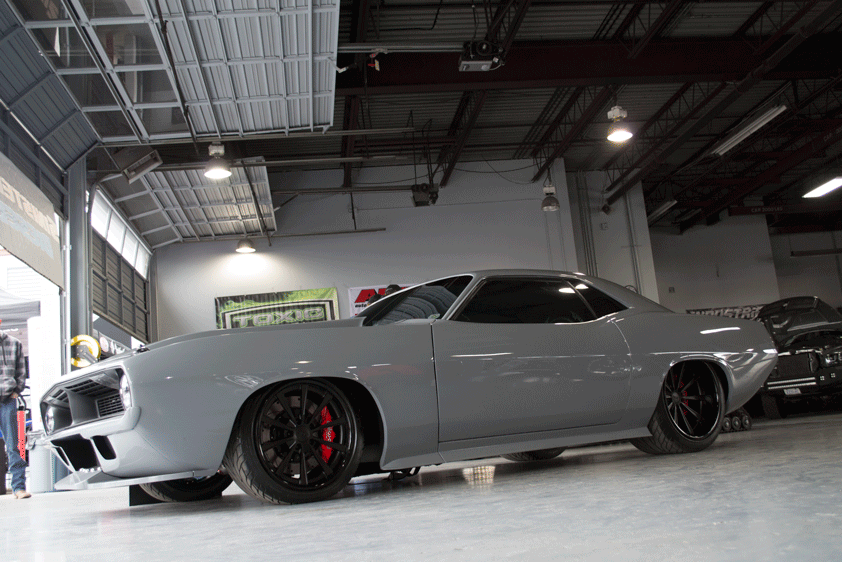 If you think it would take one heck of a transmission to stand up to this monster of an engine, you’d be right. Randy’s Transmissions has years of experience with Dodge automatics, and built a 48RE-based slushbox that was more than up to the task. With a triple-disc converter, manual valve body, and short output shaft conversion, the Dodge-based unit fits nicely under the car while handling the engine’s immense power. 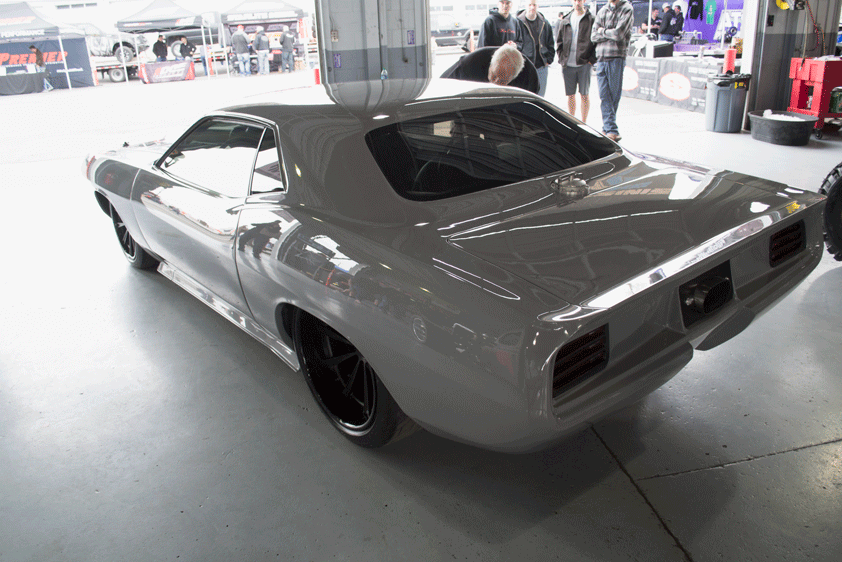 With a diesel powerplant’s torque in mind, Weaver decided to go with a Roadster Shop Fast Track chassis. Built out of 10-gauge steel, the frame features a C6 Corvette-style front end, along with the ever-popular Ford 9-inch and 4-link out back. The rear end has also been suitably modified for the diesel engine’s torque, with 3.50 gears, 35 spline axles, and a Detroit Locker. Although the chassis already features a lowered stance, Weaver went a step further and channeled the body over the frame, dropping it a further 2 1/2 inches. 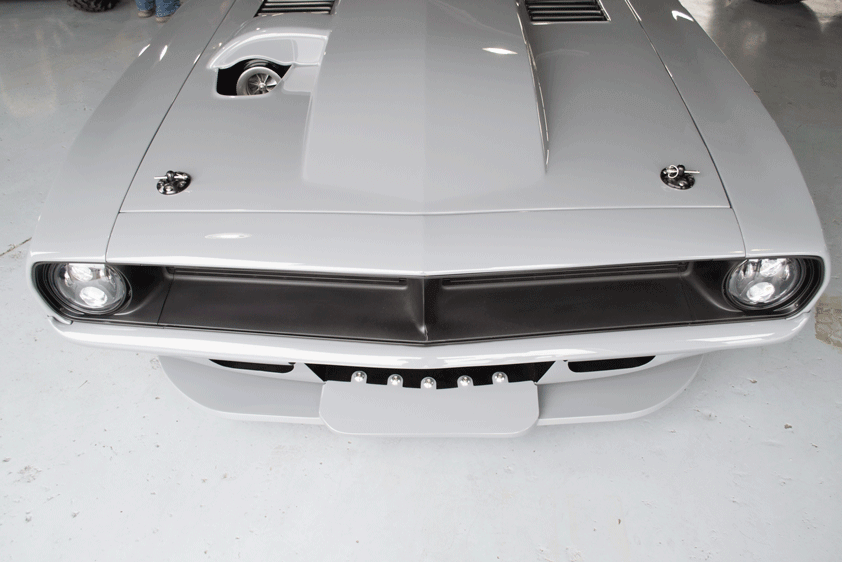 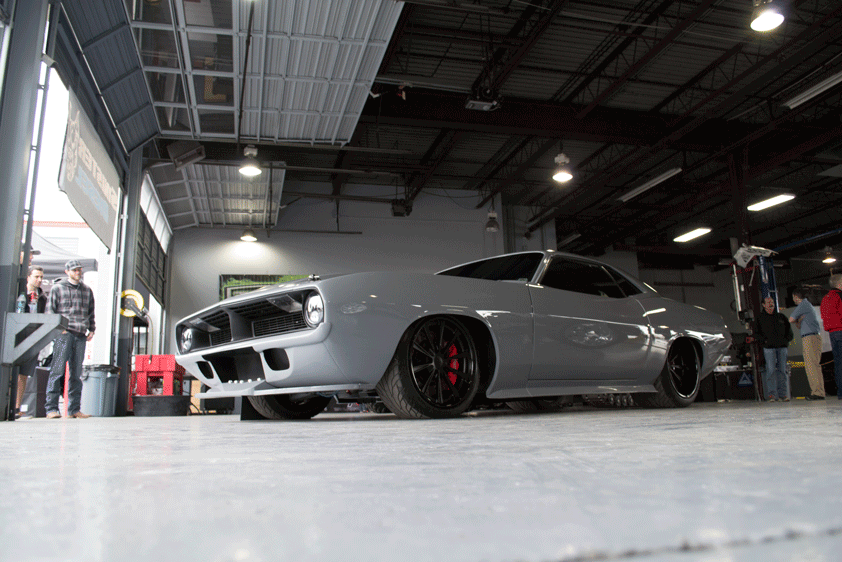 When it came time to hand out awards, titles came hard and fast for the Cuda. The car won “World’s Ultimate Mopar” at the 2016 Muscle cars at the Strip show, as well as the prestigious Goodguys Award at the 2016 Del Mar show. It’s been at SEMA and Hot August Nights, where Weaver could be seen cruising the Cuda up and down the Reno strip. With numerous awards and an outrageous diesel powerplant, Randy Weaver’s Cuda is a one-of-a-kind creation, one that won’t soon be forgotten by anyone who has been lucky enough to see it. DW