In the current climate of the auto industry, it’s difficult to be a pioneer of anything. Of course, there’s always the yearly race to see who can be the first to build a brand-new body style or modify a new truck to be the “first of its kind”. However, if you have a truck that’s been around for 20, 30, or even 40+ years, it can be a daunting challenge to build something unique. When the owner of Evapo-Rust, David Harris, began formulating a plan for a SEMA build for 2017, he wanted to be sure it would get the attention it deserved. “The truck idea came after SEMA 2016, when I saw much of the action and foot traffic had shifted to the parking lot,” Harris says. “I told my guys we needed a build that showcased exactly what our product, Evapo- Rust, does for rusted car bodies.” With that in mind, the hunt for a vehicle began.

Diamond In The Rough

After weeks of searching across states, Harris figured he’d venture back to his hometown in rural Arkansas. It was the middle of a barren field, where he discovered a 1958 Chevrolet Viking 40 that had definitely seen better days. Upon inspection, it was covered in rust, dirt, and snow. However, when Harris saw the truck, he realized that he found the truck that he and his team were looking for. Many people wouldn’t view this as an ideal starting point, but it was exactly what he and his crew were looking for: a platform on which to demonstrate the hardcore abilities of their product. Once he’d bought the truck, Harris noticed a faint logo on the hood—“DeMint”—which is where the truck’s name, Demented, comes from. 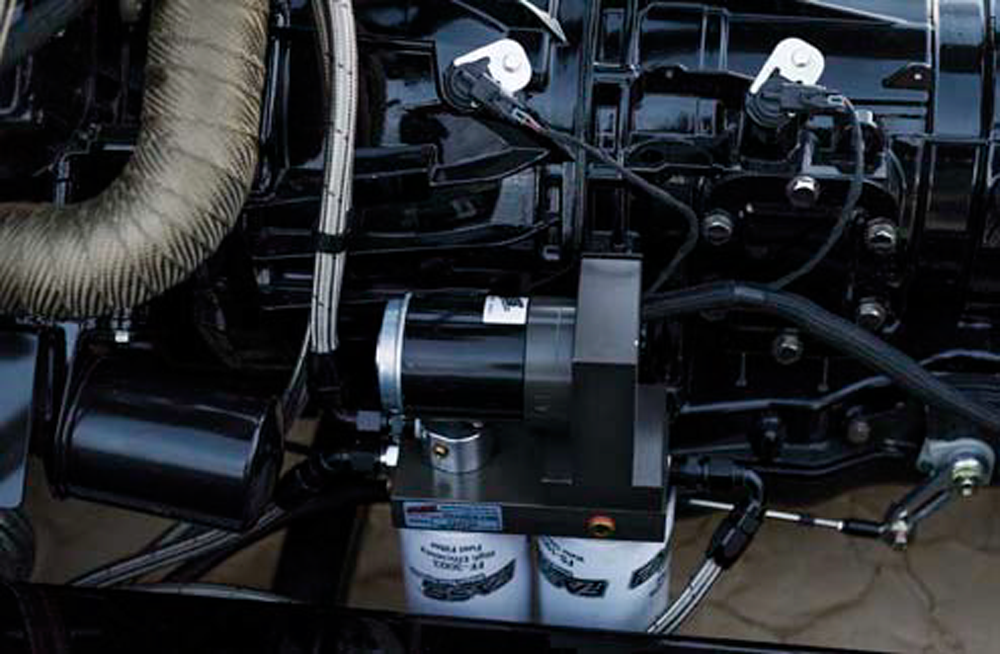 Restoration went underway immediately. The cab was unbolted and hoisted into a large tank of Evapo-Rust. After 24 hours of soaking, this miracle of science had removed all of the rust and gunk covering the nearly 60-year-old Viking cab. It was then time to get to work bringing the aged warrior to life. Any of the red paint that wasn’t destroyed by the elements was left as-is on the cab and then clear-coated six times for high-gloss protection.

A truck of this stature deserves an engine that doesn’t only move it, but rather, one that ensures fun and excitement for years to come. With that in mind, a 6.6L Duramax was extracted from an ’03 Silverado to serve as the heart of the developing beast. The injectors were fully rebuilt, and a set of turbochargers were donated by Garrett Performance to ensure that the truck laid down some serious power at its SEMA 2017 debut. The large Garrett turbos were plumbed into an exclusive, water-to-air intercooler (designed by 417 Motorsports) that works off of the Chevrolet’s air conditioner. Next, Travis Ball at Ball Metal Fab began building the custom dual-ported, 4-inch exhaust that would meet behind the turbos. With the motor and transmission painted and wrapped up, work began on the chassis.

To secure the smooth ride and look for the Demented Viking 40, a custom “air-ride” setup was built and installed to make sure it was capable of soaking up the pavement just as well as it could pull weight across it. Another project sponsor, American Force Wheels, sent a perfectly aggressive set of 24-inch Omens to support the beast’s weight all while looking good. Finished in Cadillac Gray, the wheels set the truck’s tone of brutish power. 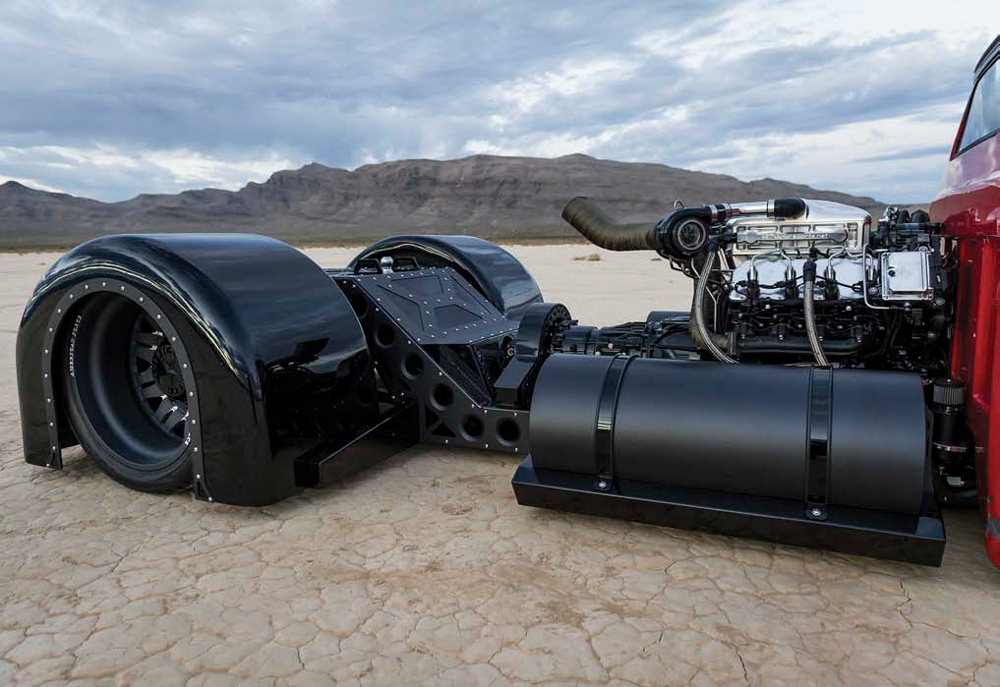 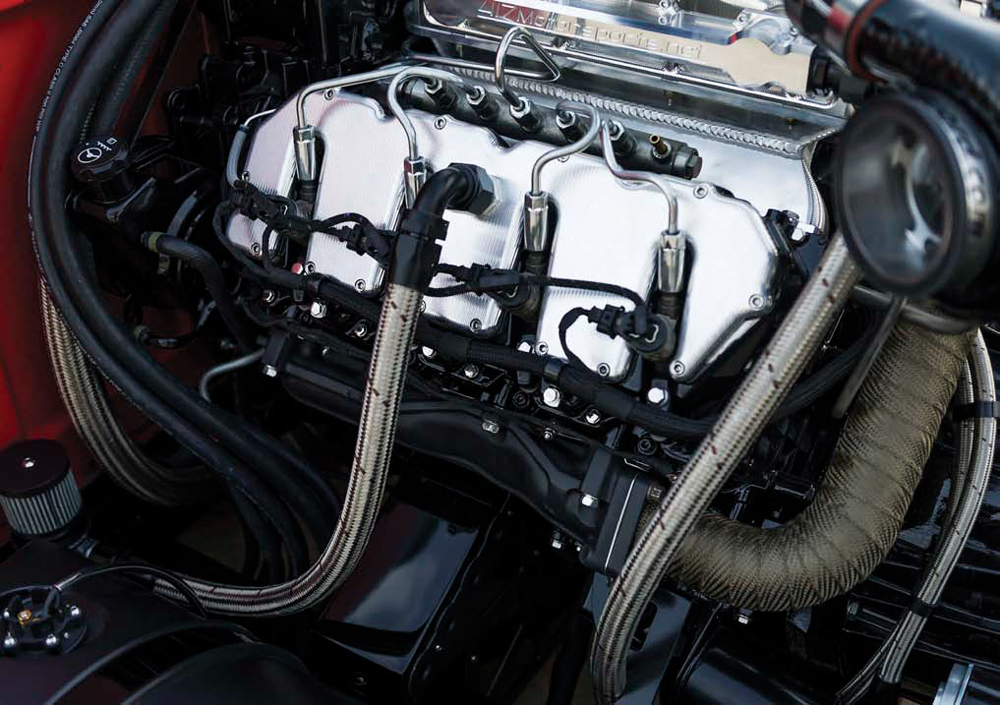 Once the fully custom-designed chassis was completed, Travis Ball and his crew installed the 47-gallon saddlebag tanks on each side of the truck. However, the passenger-side tank held a secret. Ball intentionally designed the tank on the right side of the truck to house the majority of the electrical components to make it convenient to work on them. Doing so also allowed them to be hidden away so they wouldn’t obscure the custom chassis he spent so much time designing. 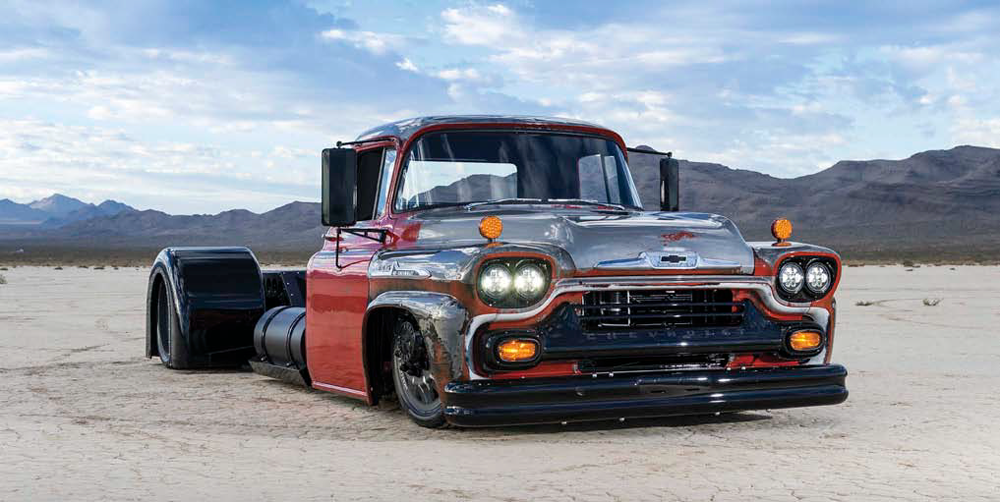 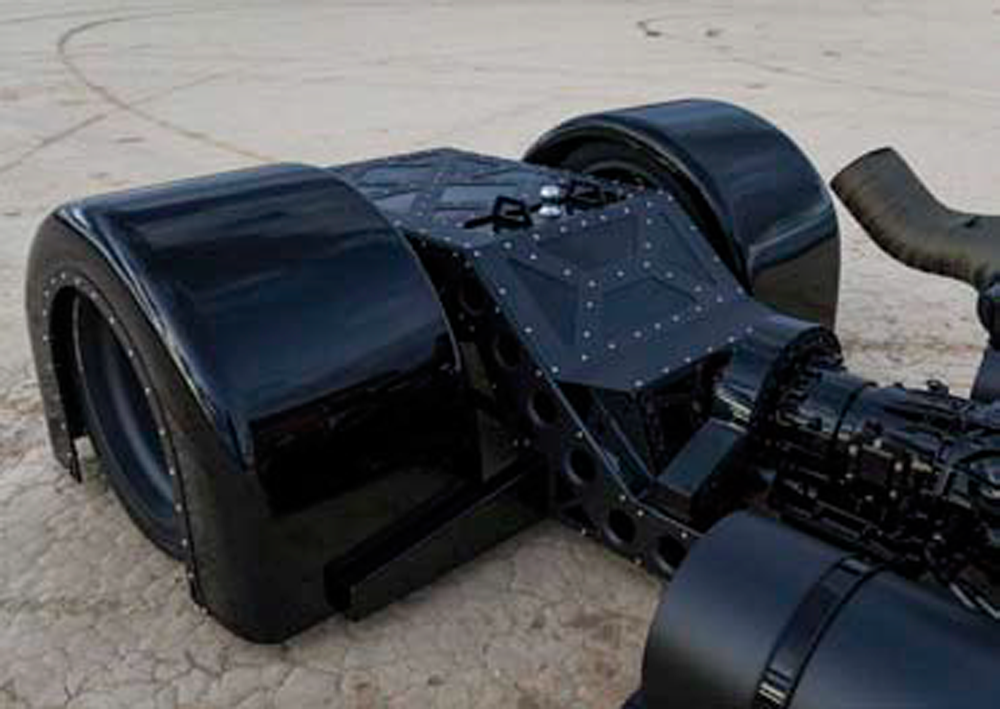 Though the truck had been under the knife for nearly a year, the majority of the work—like many SEMA builds—happened in the final few months before it headed to Vegas. It’s safe to say that Harris and Ball didn’t get much sleep from July to October. If you missed this one-of-a-kind restoration in Vegas, it will be still be hitting many of the biggest shows around the USA, so be on the lookout. 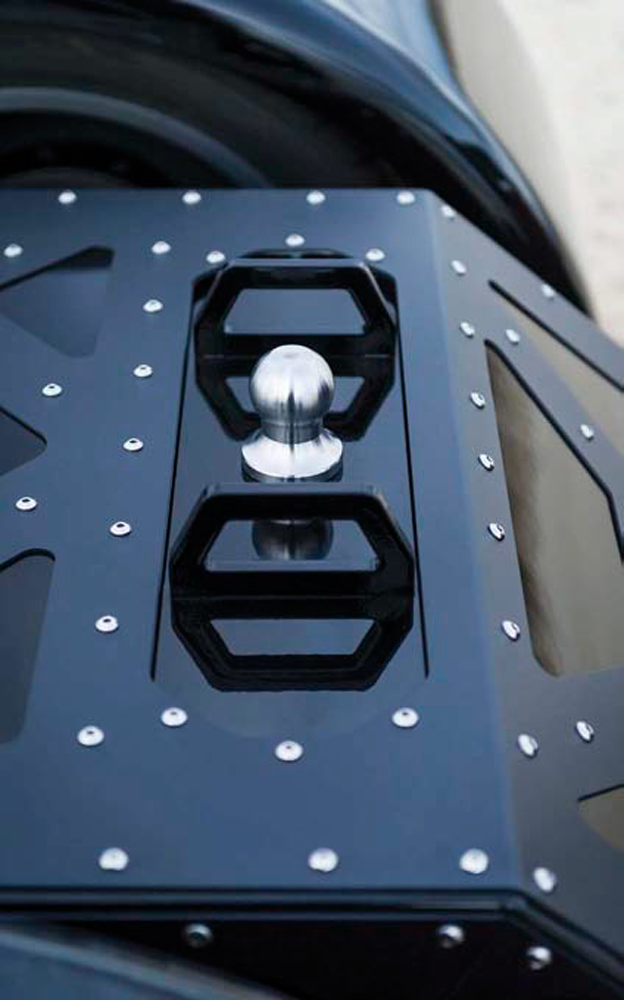 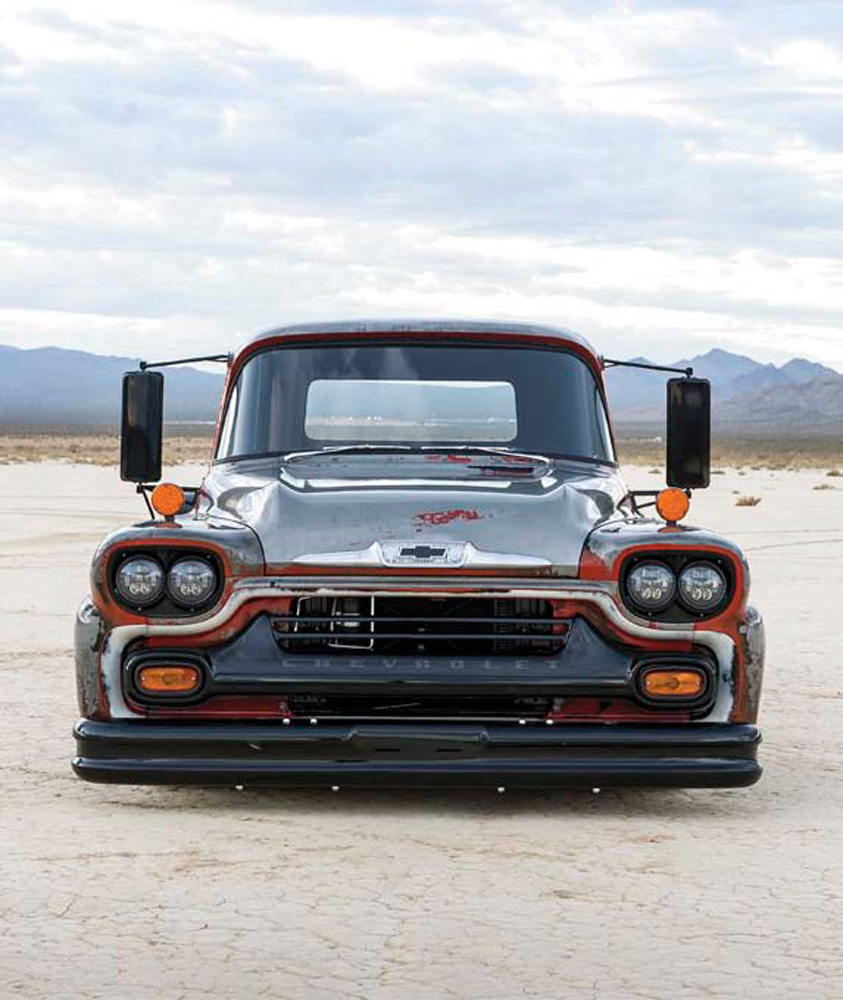 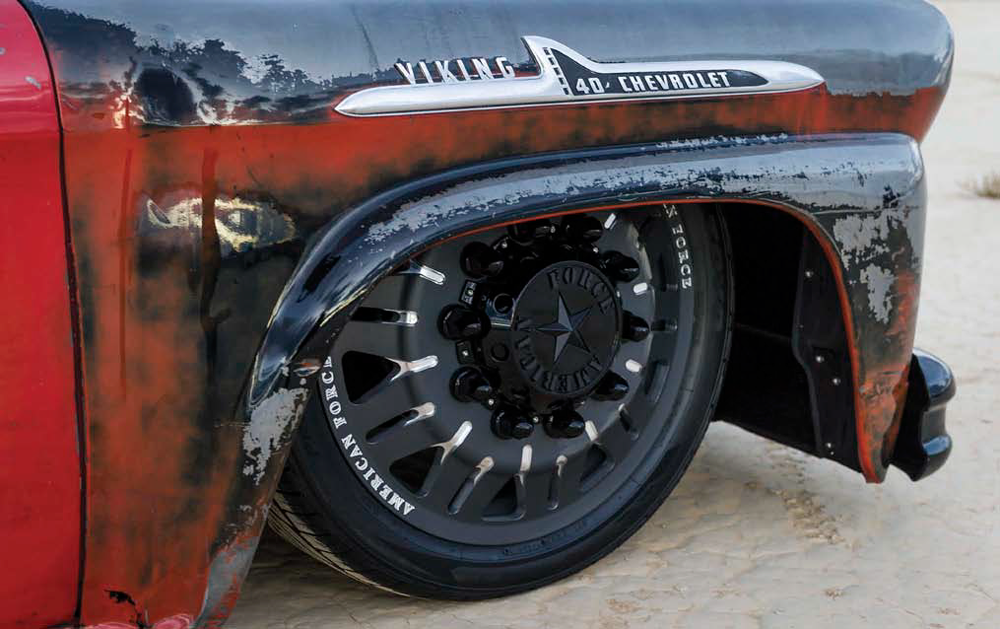 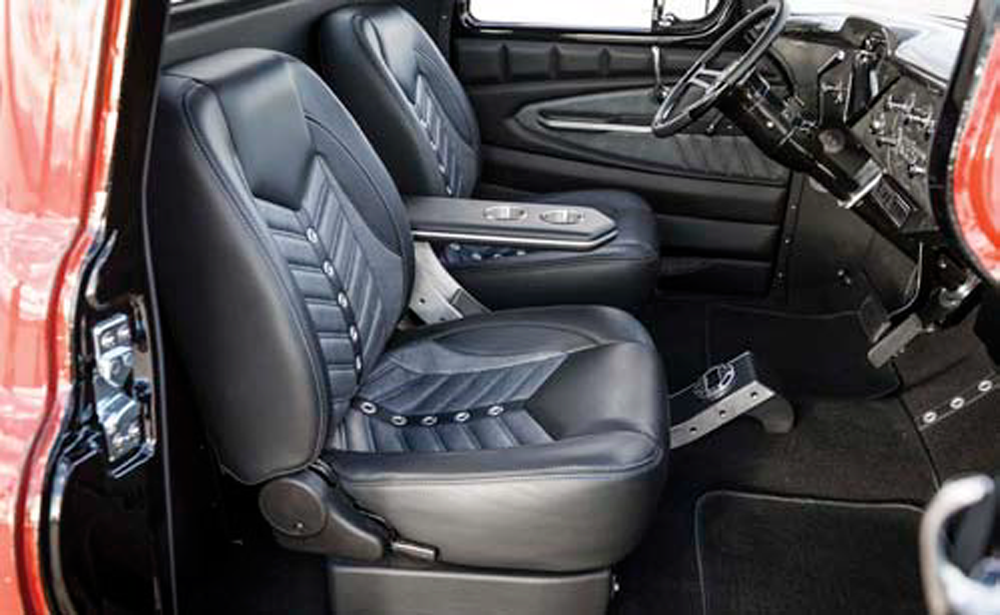