Testing the Limits of Diesel Performance

It’s the most exciting spectacle in the diesel industry: Ultimate Callout Challenge. For the third year in a row, this no-holds-barred event pitted North America’s top shops and diesel enthusiasts against each other to see whose truck could be the king of the dyno, dragstrip and pulling track. The big prize, though, would go to the combined winner, the truck that could place well enough in each event to take the overall victory. Here, there cannot be any weak links. If you’re a betting type of person, you probably don’t want to bet against Lavon Miller and Firepunk Diesel, whose truck and team took the win the past two years. Last year Miller won by taking first place at the dragstrip, second place on the dyno, and sixth place at the sled pull, which made the overall standings relatively close. Derek Rose placed a close second in his innovative DNR Customs race truck, and Wade Minter was right on Rose’s tail.

As 2018 was shaping up, the action promised to be no less fierce, as several trucks were being built specifically for UCC 2018. With GM, Ford and Dodge all taking spots in the top five in 2017, we couldn’t wait to see the Big Three battle it out as the action started. The first event would be the drag race, where diesels would fly down the 1,320 feet at Lucas Oil Raceway. Scoring would be a weighted system, meaning that it was in the competitor’s best interest to beat everyone else by as much as possible.

The early favorite was supposed to be Lavon Miller, but Jared Delekta surprised everyone by throwing down the gauntlet with an 8.26-second pass at 177 mph in his Industrial Injection-backed, Cummins-powered Chevy. Miller quickly answered in his Cummins-powered Dodge with an 8.12 at 180 mph. Many other trucks started out fast and hard by running in the low 9s. While the lightweight trucks of Miller and Delekta were the favorites, we were amazed as truck after truck got the launch at the tune down and dipped into the 8-second zone.

The Cummins-powered, Super Street spec Ford driven by Chris Buhidar blasted off an 8.57 at 165 mph while weighing more than 6,100 pounds. A few tenths back (and with a great back-half) was the Jag’s Pro Truck entry, which nailed an 8.74 at a blazing 160 mph. The 8.80s were also an area that saw more than one ride, starting with Shawn Baca’s. He has always struggled at the track, but this year he had his “Master Shredder” ride dialed in, and clicked off an impressive 8.88-second elapsed time. The top of the field was an all-Cummins affair until Wade Minter managed to place in the 8s, clicking off an 8.89-second elapsed time in his Duramax-powered Chevy. The 8-second pack would also be joined by Cody Hale of Anarchy Diesel, Donovan Harris in the Armor Inc./Dynomite Diesel Products entry (at 8.58!), and Justin Andres, who drove what would be the first all-steel truck (that we know of) to crack into the 8-second zone.

Just a couple years ago 9s would have put your truck toward the top of the UCC ladder at the drag races, but this year Anthony Reams’s 9.06-second run put him in tenth place. There were other notable 9-second performances, including the 9.24-second run by the Duramax/Allison combination of Husker Diesel, and the impressive 9.56-second run by Jesse Warren’s compound-turbo 6.0L Ford. The 10s and 11s were littered with a combination of heavier trucks and others that had problems. Power Driven Diesel did well at last year’s sled pull, and they were more than anxious to make a good showing at the drags this year. A 10.00-second run would be their best pass, however, as they would be sidelined by a cracked block. Other competitors with trouble included Canadian Shawn Ellerton, who kept blowing boots, and Tony Burkhard, who went 11.41—but at more than 140 mph, indicating some serious power. All in all, there were five competitors who wouldn’t make it past the dragstrip and who were done for the event.

As the sun was setting on the drags, there was still one matter to take care of: the battle between Jared Delekta and Lavon Miller. After Miller went 8.12, Delekta responded by raising the bar further with an 8.07-second run. But Miller still had some tricks up his sleeve as the day wound down and saved his best run for last, an unreal 7.88 seconds at 181 mph that had everyone shaking their heads and wondering if Team Firepunk could be caught.

Day Two of the Ultimate Callout Challenge saw teams preparing for the dyno event, where horsepower and torque would be added together to calculate the overall winner. Unlike the dragstrip, the dyno portion of the event would see relatively few problems other than the heartbreaking runs of Wade Minter, who was fighting fueling gremlins and would only lay down 422 horsepower and 776 lb-ft of torque. Other than Minter’s, virtually every truck was over 1,000 rwhp, starting with Frank Kuperman of Revmax, who laid down 1,146 hp and 1,541 lb-ft of torque. Right ahead of Kuperman was Shawn Ellerton, who made an impressive 1,117 hp and 1,675 lb-ft after some serious nitrous backfiring. Next on the list were two Cummins-powered entries: Cody Hopkins (Destructive Diesel) and Brett Marcum (Banghart Diesel), who made 1,223 hp and 1,309 hp, respectively.

Just like on the dragstrip, it took a pretty good number to break into the top half of the field. Fords, GMs and Dodges all cracked the 1,600 rwhp barrier, with notable performances being turned in by Tony Burkhard and Jesse Warren, who both broke the 2,600 lb-ft mark on torque, adding quite a bit to their final scores. Both the Power Driven Diesel entry and the Jag’s trucks would make stout pulls with no nitrous at 1,853 hp and 1,721 hp, respectively. The competitors weren’t even close to being finished, however, as all the top five trucks would be (at least somewhat) nitrous-assisted, and all of them would break the 2,000 hp barrier.

The first of the trucks to pass 2,000 hp would be the Cummins-powered Chevy of Jared Delekta. He had finished strong on the dragstrip, so a good dyno run would ensure that he kept up with Lavon Miller. Delekta didn’t disappoint, as the “De-maxed” Cummins put down 2,188 hp, along with 2,663 lb-ft, and fried the motor in the process. Chris Buhidar had gone 8.57 in the quarter mile so he was also in the hunt, provided he could lay down some power. In what would be arguably the loudest truck on the dyno, Buhidar made 2,238 horsepower and 2,802 lb-ft.

And then there were three. Shawn Baca, Derek Rose and Lavon Miller had all finished well last year and were all still in the running for 2018. Just as in 2017, the most horsepower would go to Baca, who switched to an enormous set of triple turbos just for the dyno event. After laying down 2,391 hp he looked to be the man to beat this year—but there was a catch. Since horsepower and torque were combined, Baca could still be beat if a competitor got a higher torque number. And that’s just what happened. Derek Rose of DNR Customs used an immense amount of nitrous to crank out 2,378 hp, but more importantly an astounding 3,479 lb-ft of torque, putting him significantly ahead of Baca as well as Lavon Miller, who made 2,243 hp and 3,014 lb-ft.

Out of the 25 trucks that started the event, huge power numbers would take their toll, and by the time the sled pull rolled around there were only 18 trucks left. Eric Merchant of Merchant Automotive would miss the dyno but be back for the sled pull. Other trucks like Wade Minter’s would need strong showings during the sled pull to finish in the top half of the field. But the big question was, who would win? There were several competitors who still had a chance, but all eyes were now on Lavon Miller and Derek Rose, who had rocketed into second place thanks to his huge torque number. Jared Delekta had also installed a new engine after the dyno event, and both he and Shawn Baca would be in the mix.

After using a stout 3.6-class puller to set the sled, the UCC pulls were off and running. First up was none other than Lavon Miller, who’d drawn first. Miller had added nearly 3,500 pounds to both the front and back of his Dodge to make weight, and it showed as he rocketed off to a 329-foot run. Now the question was, could he be caught? Shawn Baca switched to cut tires for his pull and put in a strong 324-foot showing, but that wasn’t going to cut it. Derek Rose was looking to lay down a serious number, but he too fell short with a 301-foot effort. In fact, the top of the ladder was extremely close, as trucks that had done well at the drags and on the dyno also pulled strong. Chris Buhidar put in a 293-foot effort, and the Armor Inc./DDP entry made the list at 293 also. Power Driven Diesel also switched to cut tires and pulled 290 feet, while other consistent competitors like Jared Delekta and Cody Hale pulled in the mid-200s.

In the end, nobody could catch Lavon Miller and Firepunk Diesel, who added a third title to his already-impressive list of accomplishments. This year was far from a runaway, however, as Derek Rose and Shawn Baca were both nipping at his heels for the entire event, as were Chris Buhidar and Jared Delekta. The fact that it took a 7-second quarter mile pass, a 2,243 hp dyno number and a 329-foot pull to win shows just how stiff the competition has become as competitors have raised the bar higher and higher. The only problem was that Miller has upped his game too and reached new heights in 2018, becoming a three-time Ultimate Callout Challenge champion.

While Lavon Miller was the undisputed champion, these results will show just how hard it was to crack into the Top 5 in the overall standings. Kudos to everyone who brought enough truck, driver and know-how to be able to place in these rarefied heights. 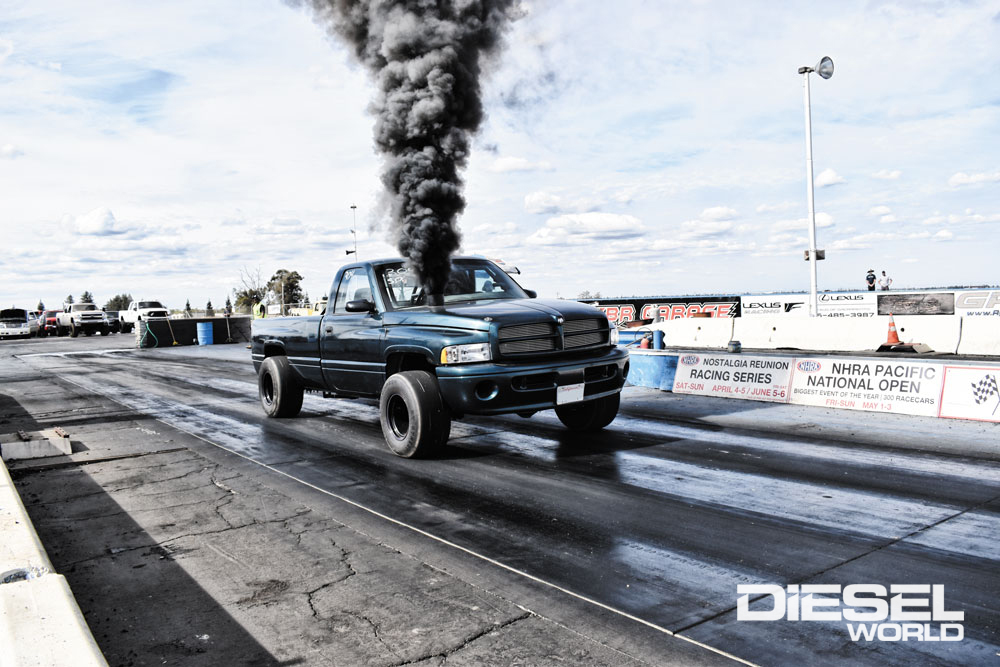