The Sixth Time’s a Charm for this Talented Builder.

If it’s true that the more you do something, the better you get at it, then Miami’s José Lugo’s skill in creating imaginative rat rods might be approaching perfection. José already has five hand-built, patina creations in his past and each was better than the last. This one is trophy-rat numba-six! 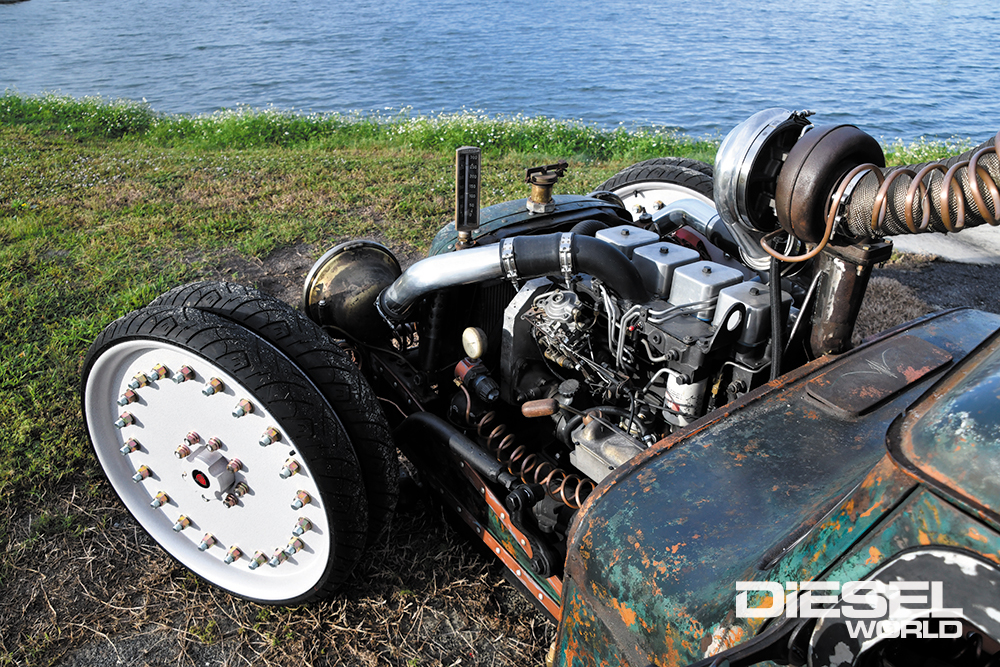 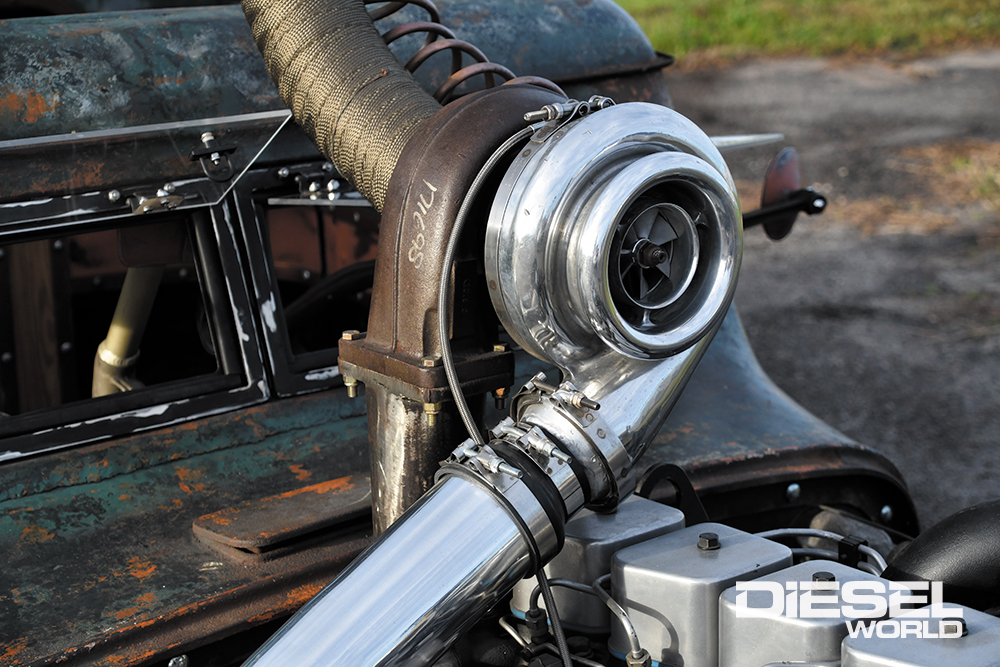 José works in the family electrostatic industrial painting business, specializing in powder coating. Although customer projects pay the bills, his real joy is the creativity involved in building one-of-a-kind, radical rides. In addition to dispensing with such traditional touches like chrome and paint, the rat rod builder’s challenge is assembling an imaginative collection of unrelated parts and adapting them to traditional roles. Need to sit down? How about a pair of re purposed tractor seats? Need a shifter for the trans? Let’s use the nozzle from a gasoline pump. You get the idea. It’s not a glitch.  It’s a feature! 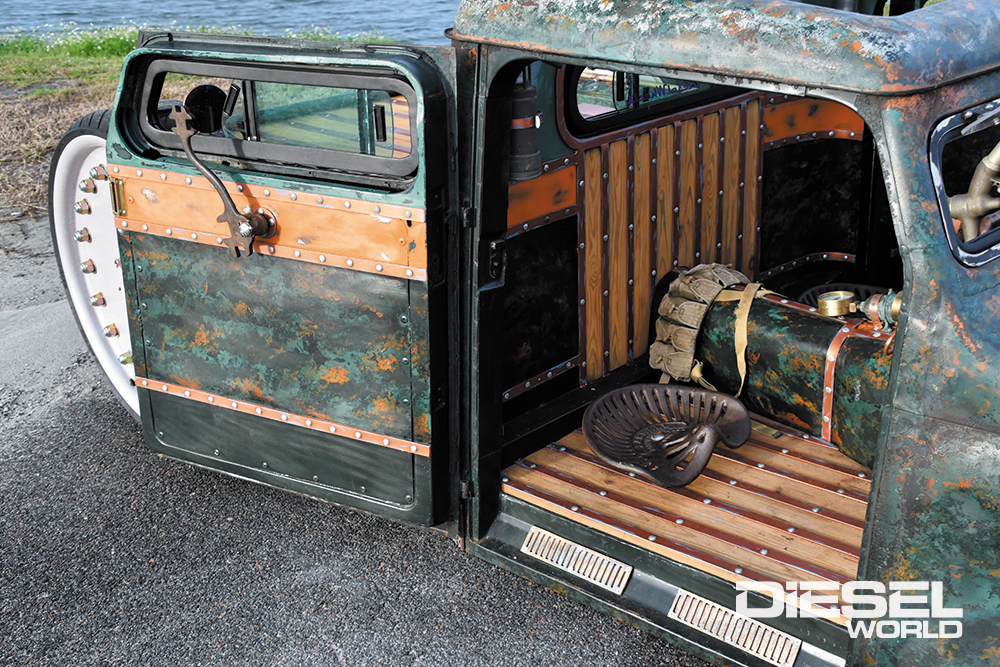 First steps first, José always begins with a custom chassis, this one fabricated from 2×4 rectangular steel tubing and strengthened with multiple cross members to withstand the torque of the planned new power plant. At the tail end, a ’69 Chevy C-10 rear is held in place with a shop-built, custom 4-link. Up front, the solid Willys axle boasts custom radius arms, dropped spindles and steering stabilizers. While the battered and tattered exterior is part of the plan, close inspection reveals just the opposite underneath with high tech Brembo disk brakes on all four corners along with a custom air bag suspension that drops the rockers to the asphalt. Touch the button and ants run for their lives! Two Viair compressors are the heart of the system, filling a pair of hidden reserve tanks using 3/8 copper hard lines. Finally, the 12-gallon fuel tank between the rear frame rails wrapped up the chassis mods, giving the rod plenty of range. 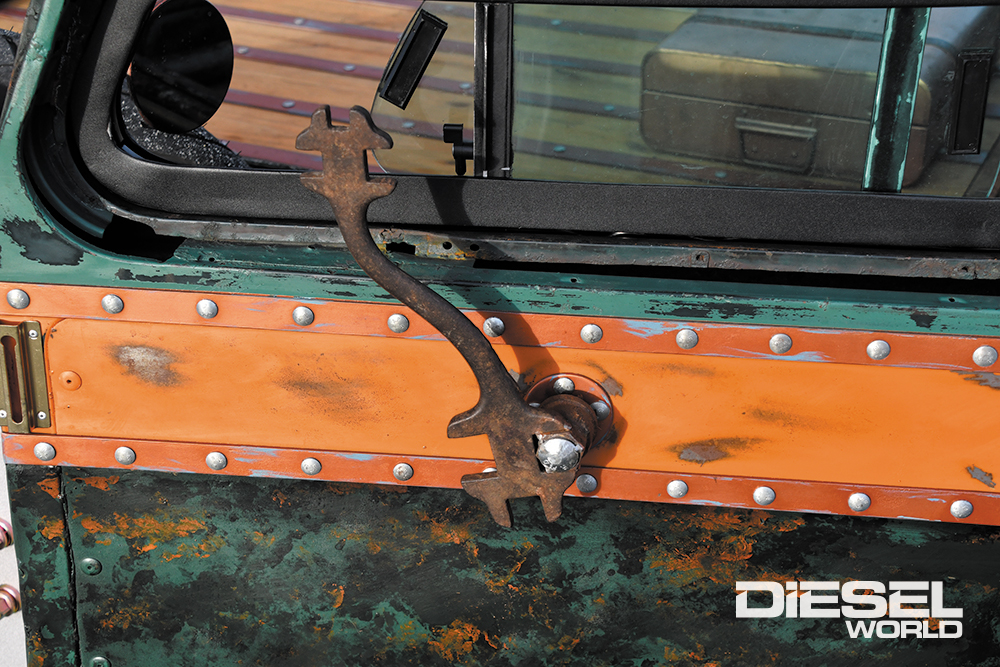 There are always multiple choices when it comes to power but, if getting noticed is the goal, it has to be a departure from the norm. Rather than choosing a universal donor like a 350 Chevy, José installed a 3.9L Cummins 4BT engine, an 800-pound cast iron bullet salvaged from a North Carolina bread truck (which coincidentally, is the engine’s nickname!) Originally designed for light commercial and industrial applications, the robust inline four has more than enough power in stock form to move the lightweight rod. In order to achieve the recognition goal and garner style points, José added a ported and polished head, 100% over injectors, and a compound turbo setup pieced together from multiple sources (in true rat rod fashion). The un muffled exhaust stack looms over the lowered roof line creating another eye-catching element on this wild ride, made even more spectacular when José pushes the button and it becomes a flame thrower! The Cummins was mated to a 700R4 automatic. 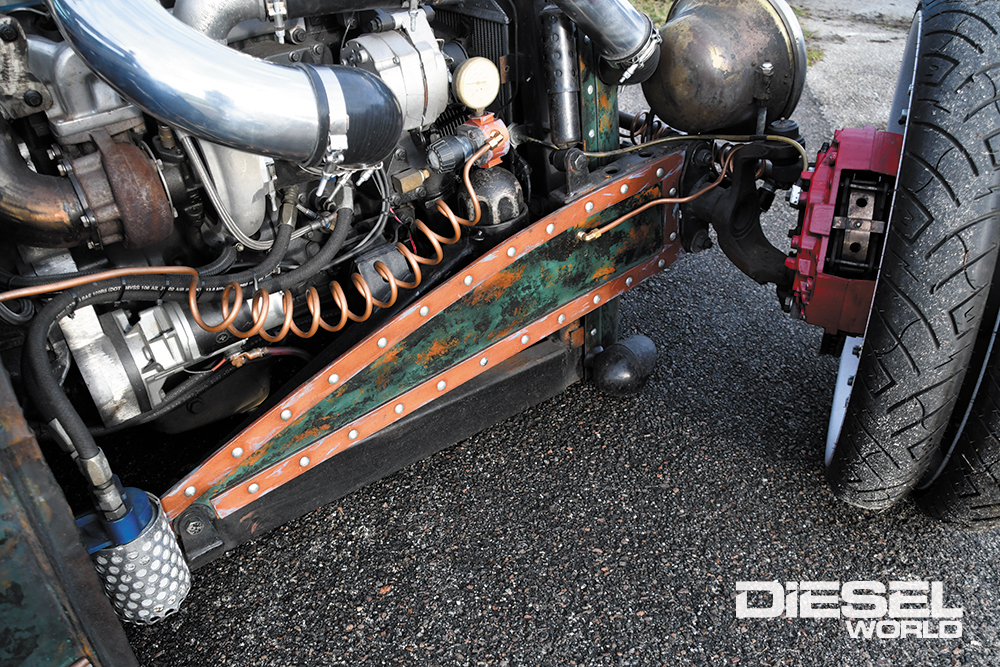 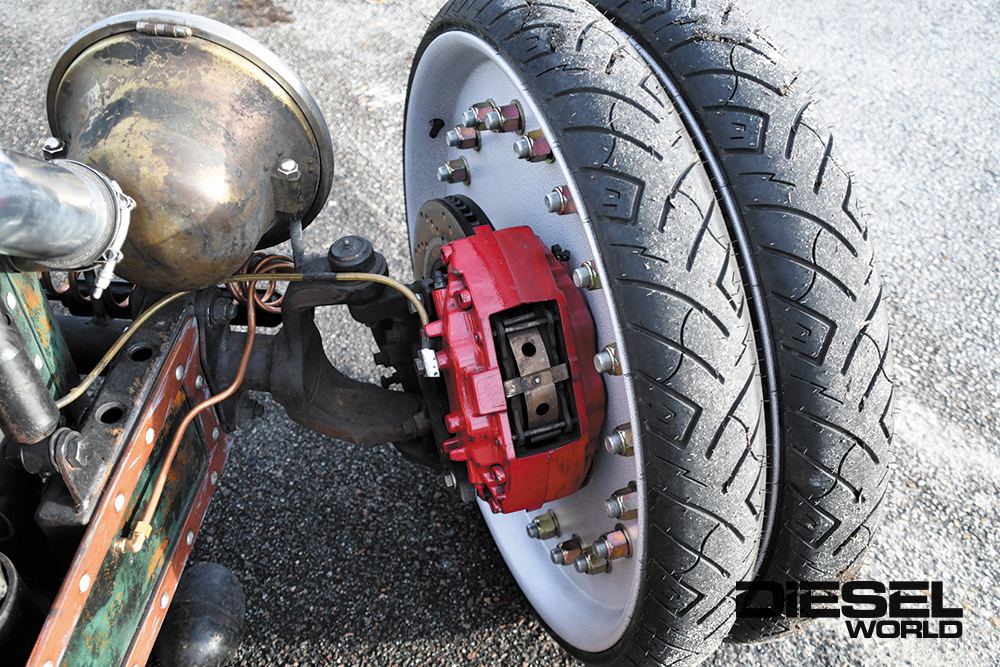 The salvage yard 1947 Willys Jeep body from Village Custom in North Carolina is almost unrecognizable sporting a 5-inch top chop, suicide doors with external hinges and sliding side glass, along with front windshield panes that double as air-conditioning. It’s also a high speed tanning machine, thanks to a full-time sunroof. Huge vintage headlights from a 1917 Cadillac surround the radiator shell, enhanced with a copper wire grid. In the rear, the Teak wood bed features a raised floor, brass pipe side rails, an essential piece of luggage for that perfect weekend getaway, and maritime lantern taillights. Drop the tailgate to check the gauges on the air suspension system. For a turn of the century touch, subtle cane work embellishments were added to the cab corners, radiator shell, and rear pan while the distinctive Mother Nature-inspired patina ensures immediate acceptance into the rat rod community.

When you move to the interior, you realize that imagination is a prerequisite if your goal is an award-winning vehicle. With hose-down maintenance as a part of the design esthetic, everything inside is unexpected. As we mentioned before, the driver and (brave?) passenger sit in the lap of iron luxury on re-purposed farm tractor seats with the steering wheel also exuding native farm charm. And yes, that military gasoline nozzle really is the shifter for the 700R4. A combination of old and new gauges adorn the dash along with warning lights and brass tube grab handles. Coiled copper is used as a design element on the controls that activate the air suspension. The Teak wood floor, door panels, and rear cab wall match the wood in the bed while the hundreds of rivets inside and out give the truck an unmistakable steampunk vibe. 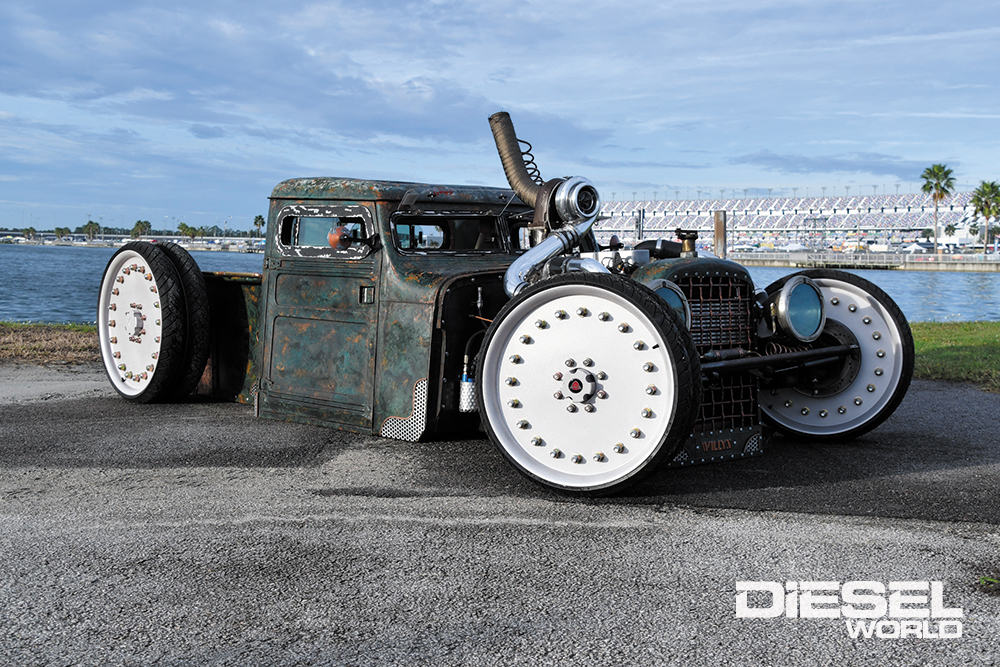 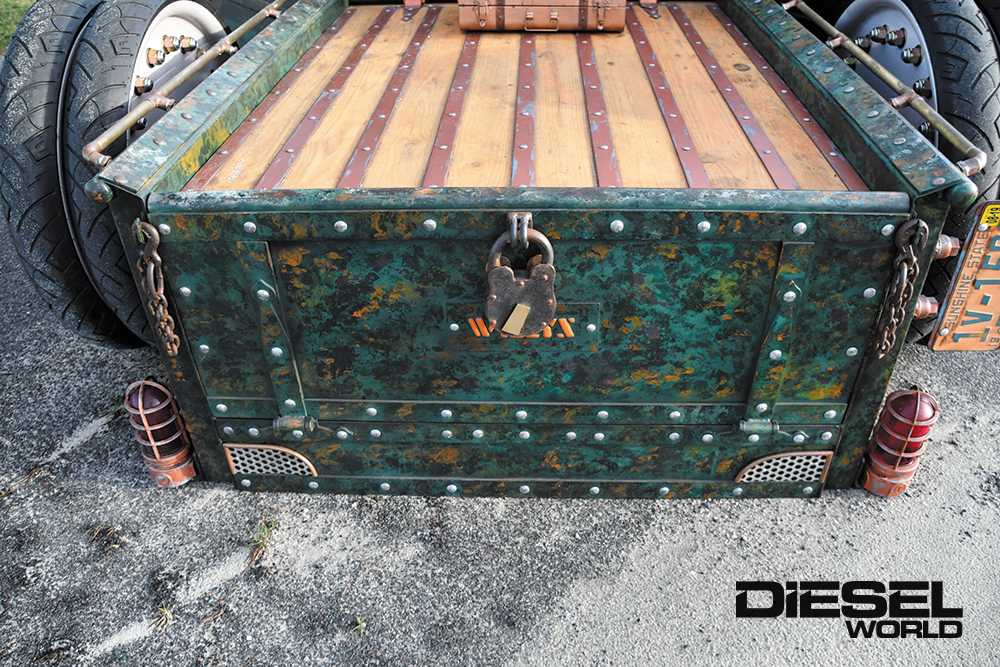 Probably the biggest visual shock on this feature-filled rod is the rolling stock. His previous ride, the Mack Rat, ran a pair of 22s up front and huge, dual 24s in the rear — powder coated in translucent copper and laced with ominous chrome spikes. Clearly, José favors unique choices. Once again, he teamed up with Frank Carralero of Diesel Wheels to create this startling choice that causes heads to turn whenever the truck rolls into frame. Inspired by an eight-wheeled ride that Frank had back in the 80s, the Octo-Rat boasts a pair of custom-made eight-lug wheels bolted to each corner, 26-inch versions in front and 30’s in the rear, all wrapped in Shinko motorcycle rubber. Each of the eight rims has been enhanced with an additional 20 lugs, symmetrically spaced around the perimeter, using 3/4-inch bolts on the 26s. Going the extra mile to achieve just the right proportions, the bolts in the rear were scaled up to 7/8-inch on the 30s. Powder coated a bright silvery white, the wheels are functional as well as an example of innovative engineering at its most creative. 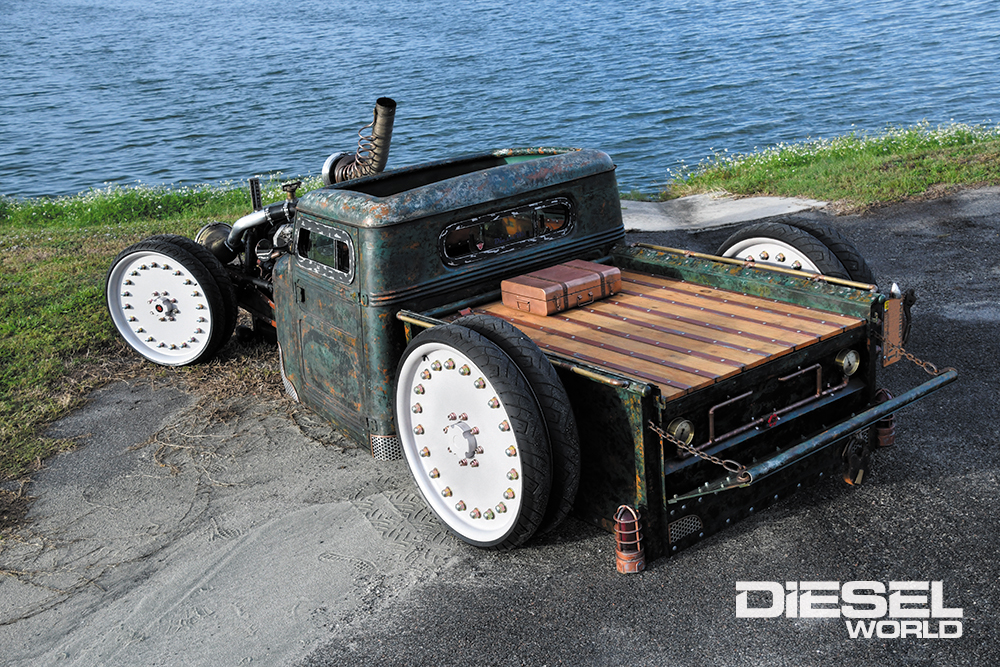 José spent seven months on his latest effort. While the dozens of subtle details might have delayed the finish, most enthusiasts realize it’s worth the extra time, an idea underscored the first time you see spectators mesmerized by the wealth of details. Now that the build is complete, José was both surprised and gratified by the reception the truck has received. He and his truck have already been invited to several big name shows as the featured vehicle and he plans to enjoy showing and driving the latest addition to his collection for years to come. Special thanks to Juan (Veneno) Garcia for his overall assistance with the build, Rolando (Puro) Perez, the ace mechanic, Carlos A. Avelar, idea man and creator of the unique patina paint, and Frank Carralero, wheel designing guru and air suspension expert.

Wheels: Four 26-inch and four 30-inch custom wheels machined from a solid billet by Diesel Wheels, Miami, each accented with 20 additional lugs and powder coated silvery white. The original 5-lug hubs were converted to 8-lug versions.
Suspension: The Chevy C-10 rear is held in place with a shop-built, custom 4-link, and the solid Willys front axle is equipped with custom radius arms and dual steering stabilizers. The air suspension system uses twin Viair 444 compressors, Slam Specialties 2500lb bags and manifold, 3-gallon and 5-gallon hidden reserve tanks, and 3/8-inch copper hard lines. Brembo 6-piston calipers with 16-inch cross-drilled and slotted rotors up front and 2-piston calipers on 14-inch versions in the rear.
Body: The chopped and body-dropped 1947 Willys Jeep cab runs suicide doors, sunroof, patina paint, marine side and rear glass, along with split front windshield panes. Then there are the vintage Cadillac headlights, maritime lantern taillights, Teak wood bed with raised floor, cane work accents throughout, and dozens of unique period accessories.
Interior: Matching Teak wood accents inside with tractor seats and wheel, gasoline nozzle shifter, vintage and modern gauges on the dash, distinctive air suspension control unit, copper and rivet accents throughout.
Fun Fact: While the eight wheels may be the rod’s most distinctive feature – and it handles surprisingly well –  José now has to get used to NOT doing burnouts in his latest ride!