When you have lemons, you make lemonade, and when you break an egg, you make an omelet. In this single-use, disposable world, it is refreshing to hear about a bad situation made better through upcycling and restoration—especially if it resurrects a truck that would have normally been resigned to rust into obliteration in the junkyard. This 2012 Chevy Silverado started life as does thousands of hard working trucks in America until it was involved in a horrific encounter with a concrete wall, completely destroying the truck in the process. However, the truck wasn’t a stranger to the Custom Auto crew, as the owner had been a good customer, which is how it ended up residing there permanently. After the accident, Ryan Hillman, the manager at the shop arranged for its purchase with the idea of building a unique custom ride as a showpiece of the shop’s abilities. Ryan explains: “We love trucks that stand out. Many show trucks these days have factory paint or a vinyl wrap. We wanted something different, something that would really grab attention.” Because the stock Duramax 6.6-liter engine was basically destroyed in the accident, what was left of it was torn apart and rebuilt by Baird Racing in Idaho Falls. While the crankshaft and oil pan remained stock, the eight pistons were replaced with Diamond Racing’s forged versions, and the rods were sourced from Wagler Competition Products. Honed to exacting specifications, the rods feature a tongue-and-groove design to better align the cap locks, which helps maintain a true bore. The pushrods came from Trend Performance, and ARP supplied the head studs to keep the Industrial Injection Competition heads bolted securely to the block.

In order to feed the LML engine, Exergy Performance came up with healthy-but-efficient injectors and CP3s, while ATS Diesel provided the dual fueler kit. Supplying the CP3s is a Titanium Series fuel lift pump engineered by FASS Fuel Systems designed to remove water vapor and extend the life of the injectors—rated at 220 gallons per hour.

“The truck spent a week in the lime light at SEMA where it gained a great deal of attention, which was exactly what the crew at Custom Auto wanted.”

To breathe easier, the engine was fitted with a compound turbo kit fabricated by Screamin’ Diesel Performance in Port Angeles, Washington, using a Borg S488 over an S464 turbo setup. Hot-side piping and exhaust housing were ceramic coated and heat wrapped, while the cold-side piping and compressor housing were powder coated to match. Screamin’ Diesel Performance also supplied the CP3 conversion for the valley pump, while Nitrous Express gave the intake air a much-appreciated boost in O2 when needed. Engine temperatures were kept at bay with a radiator and intercooler from Mishimoto, and spent gases now escape via high-flow exhaust manifolds and up-pipes from Pacific Performance Engineering in Fullerton, California.

The whole thing was brought under control and tuned to smooth-running perfection by Kory Willis at PPEI Custom Tuning in in Lake Charles, Louisiana. The EZLynkAutoAgent shift-on-the-fly tuner is able to monitor and calibrate a multitude of sensors, data log, and broadcast diagnostics information via a smartphone. Additional data-logging information comes to the driver via an CTS2 Insight Monitor from Edge Products.

If you’re going to take the time, money, and energy to rebuild an engine—one that already performs respectably in stock guise—into a fire-breathing dragon, then you have to go the extra nine yards to make the truck stand out above the rest.

To help ensure better odds against concrete walls in the future, the front and rear bumpers were replaced with all-steel models from Fusion Bumpers. Carved into the bolstered steel of the front bumper are two pairs of 30-watt LED Cube Lights from Assault LED Lighting, each pumping out 3,000 lumens of daylight.

All of the bodywork was done with an expert’s care of attention by Jeff Call, resident body man at Custom Auto. On the sides, Bestop supplied a pair of their popular Powerboards and the EZFold aluminum tri-fold tonneau cover. The Powerboards activate when the door is opened— dropping the step down six inches—and are capable of handling a 600-pound load. They’re made from aluminum so they’re light and unable to rust. 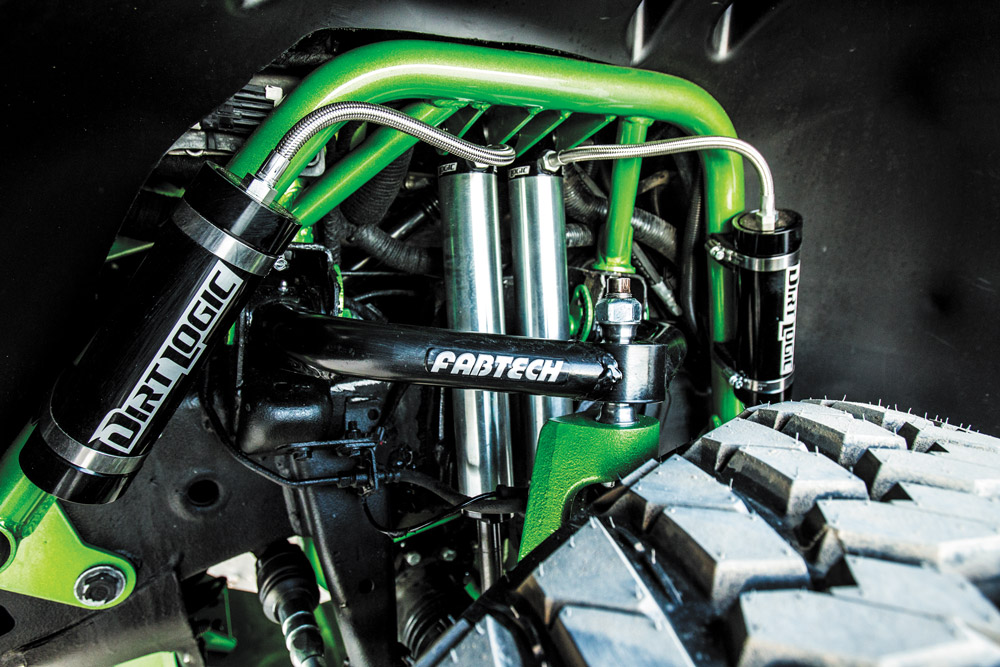 Helping to climb over the bumps on and off the road is Fabtech’s RTS six-inch lift for Chevy’s Silverado models. The kit features a bracket system that keeps the torsion bars raised up in the stock location to help provide a higher ground clearance.

On all four corners are Fabtech’s Dirt Logic 2.25 stainless steel shocks, which are designed to replace the factory shocks with a much more robust configuration. They are specifically used on trucks with larger tires like this one. 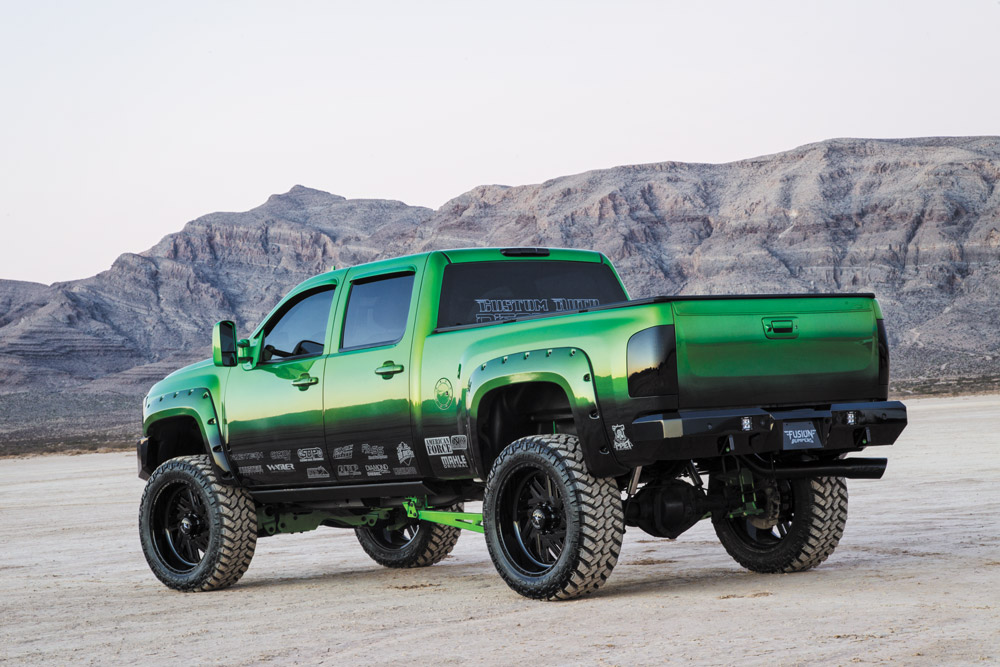 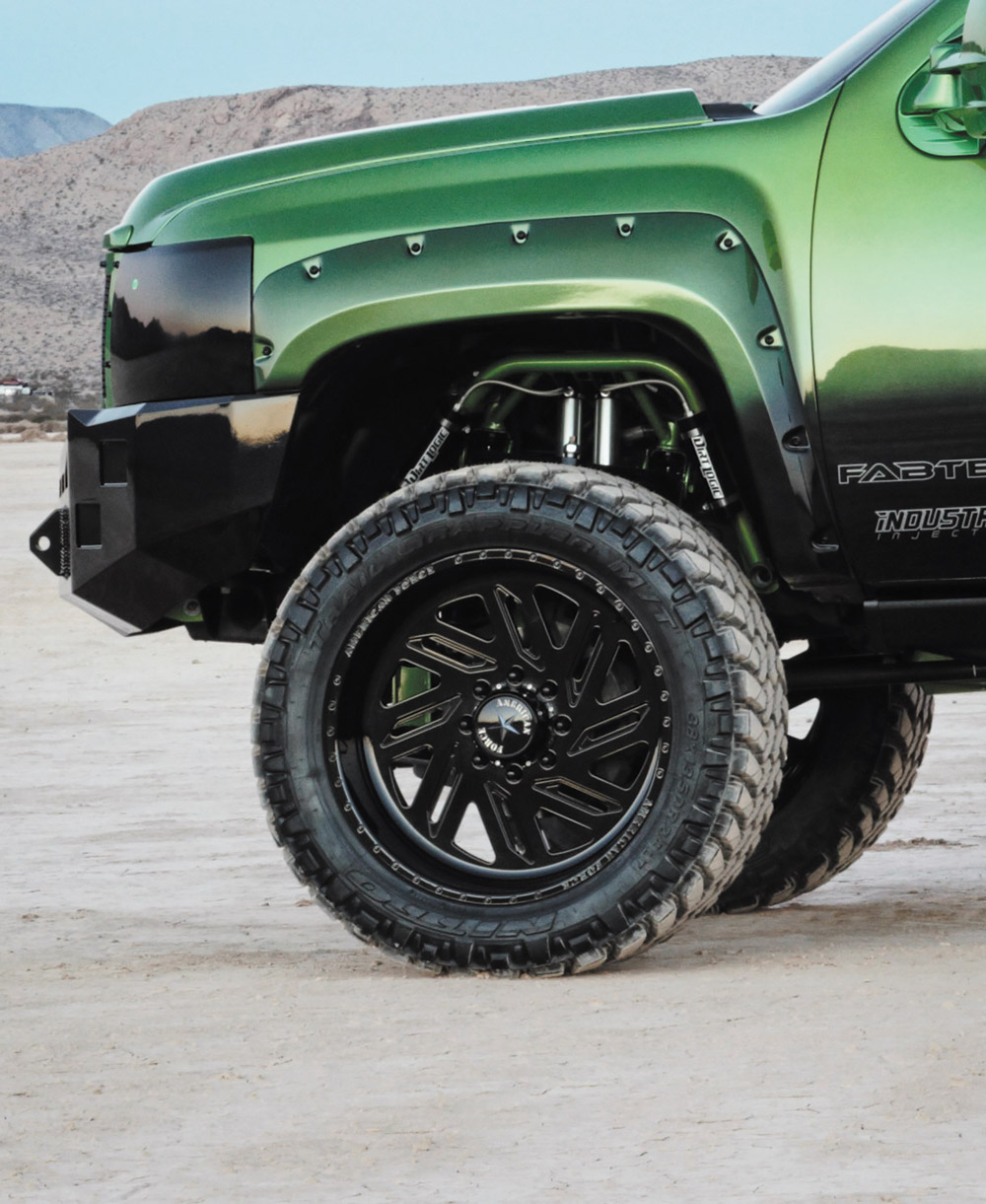 The truck spent a week in the lime light at SEMA where it gained a great deal of attention, which was exactly what the crew at Custom Auto wanted. Now that it is back at the Custom Auto shop in Idaho Falls, the real work is about to begin. “Now that SEMA is over,” says Ryan, “We will start getting the tuning dialed in with PPEI and take it to competitions.” Just to prove that Custom Auto LLC doesn’t build trailer queens, Ryan adds: “It’s not just for show.” 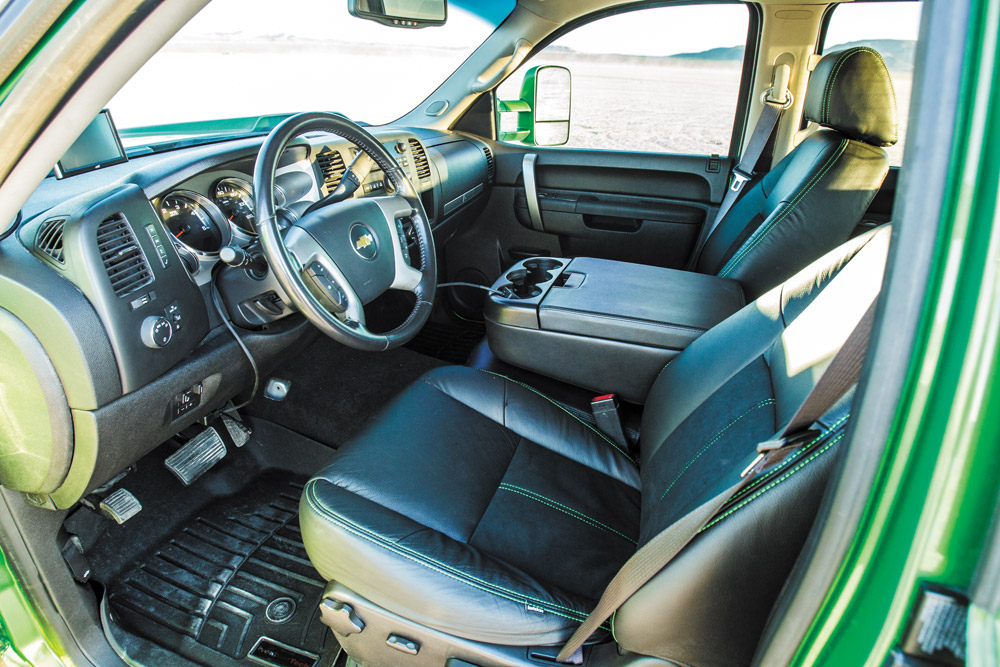 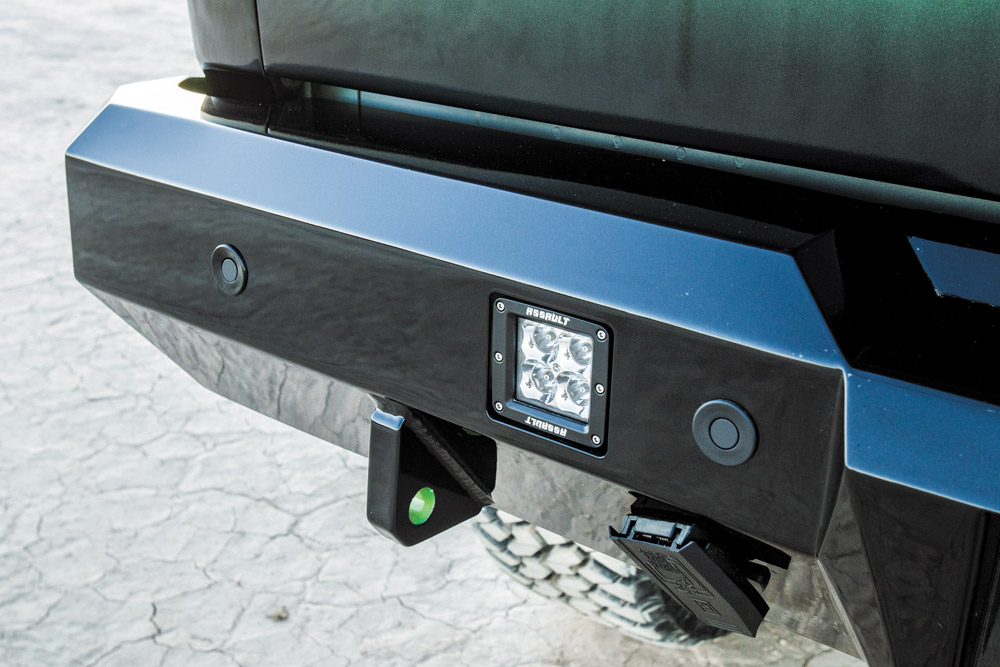 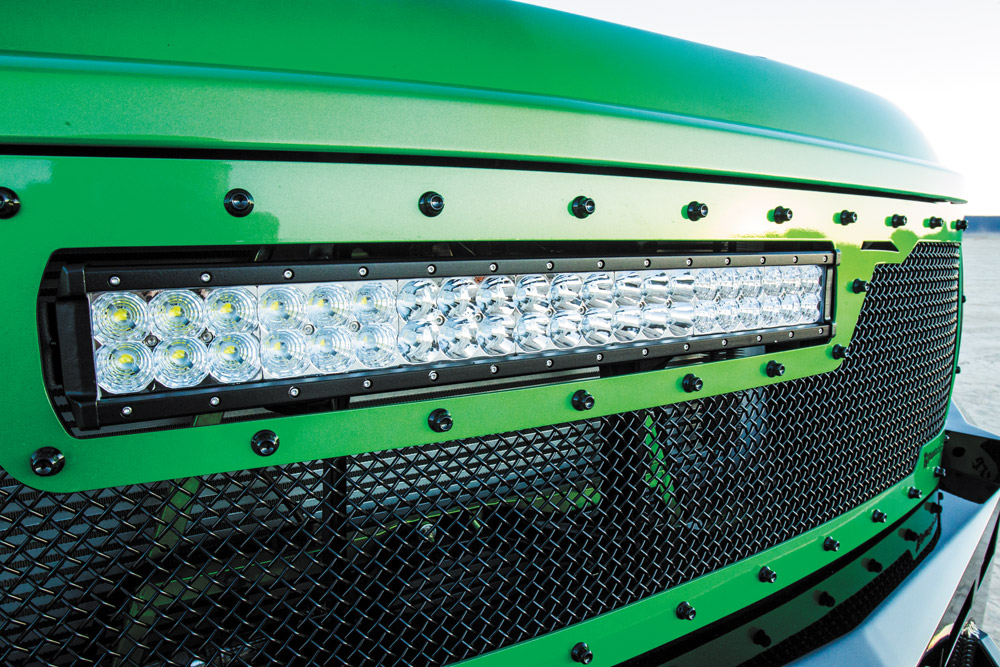 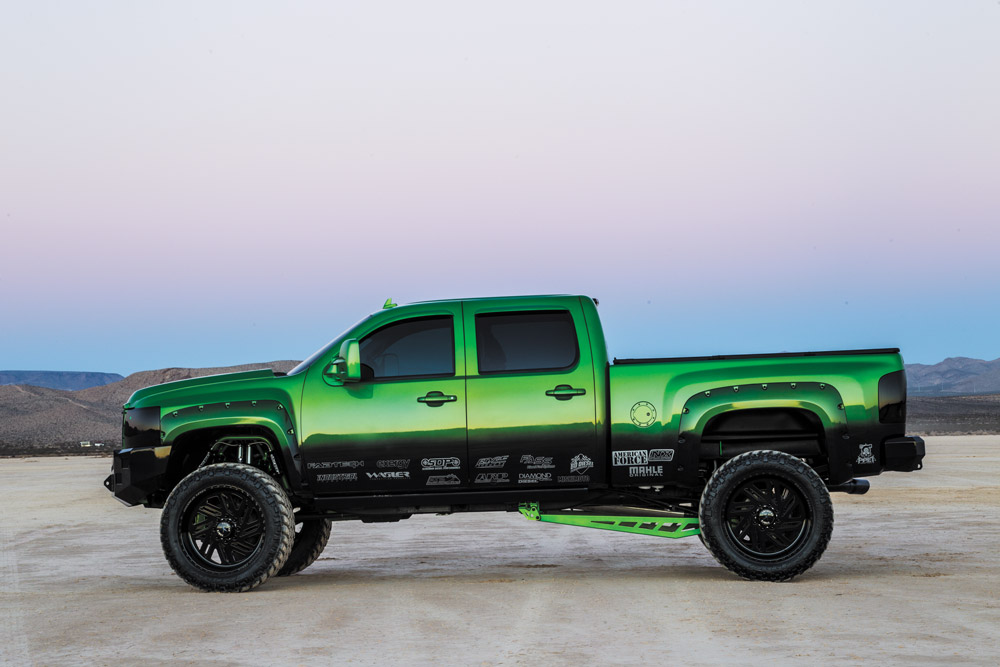