TONY BURKHARD’S 1,800-HP 7.0L DURAMAX SLED PULLER
Sled Pulling’s Pro Stock Diesel Class is super competitive; with a number of hard charging trucks being built or classed-up in the past few years. One truck in particular stood out to us, Tony Burkhard’s Cheap Hooker pulling truck. What impressed us was not only what was done, but what wasn’t done. The truck still has a (reinforced) factory frame. It has an LML Duramax block. It even still (somehow) has independent front suspension, although that too has been heavily reinforced. So what does it take to build a competitive 3.6-Class puller? We asked Tony to find out.

Like drag trucks, sled pulling chassis are gutted of all necessary weight, so as much weight can be moved up front as possible. In Tony’s case, this meant a long wheelbase ‘06 Chevy as a starting point. After the truck was emptied of its interior and all other creature comforts, Tony set to work on the factory frame, narrowing the rearend, and reinforcing the framerails. The rear axle sees the brunt of the force in a puller, so Tony went with an ultra heavy-duty 20-145 Rockwell axle fitted with 4.10 gears and built by Performance Pros. The front axle is surprisingly still an independent suspension 9.25-inch, that has been upgraded with a set of tough RCV axles. The rear axle is solidly mounted to the frame, while bouncing is controlled up front by four coilover Varishocks (two per side.)

While a rigid chassis is important, big power is key when it comes to putting the gap on the competition. Since Tony owns his own shop, Dirty Hooker Diesel, he’s as familiar with the Duramax engine as anyone, and knew all the key components to make a whopping 1,800 horsepower. Reliability is of the utmost importance, as you can’t win if you can’t even make it past the starting line. Tony started with an LML block, that has been upgraded to the extreme, with a Wagler Perfomance main girdle and billet mains, deckplates and sleeves, and ARP head and main studs. Since Tony spins the engine to 6,500 rpm, he put a lot of cash into the rotating assembly, with a Winberg crankshaft, Wagler aluminum rods, and 15.5:1 Diamond forged pistons. The heads are also from Wagler, and the valves are bumped by a custom roller cam that has an alternate swap firing order.

Just as much work went into the fuel and air systems as anything else, as those are the components that make power. The start of the equation centers around a turbocharger from Precision Turbo and Engine, which has been modified by Mark Broviak at Danville Performance to meet 3.6-inch (91.4mm) inducer rules. The big charger sends an efficient 65psi of boost to the Wagler intercooler intake box, which keeps the intake temperatures frigid. On the fuel side of things, twin 12mm stroker pumps from Exergy Engineering send fuel to mammoth 400-percent-over LLY injectors, and are supported by a Waterman lift pump. Tony says the engine is so efficient, he’s able to maintain winning horsepower levels without even needing water injection, and at 1,600 to 1,700 degree exhaust gas temperatures. All of this power is channeled through a 4-disc Molinari clutch which Tony reports has performed “outstanding,” and has went for 3 years without ever coming out of the truck. An SCS dropbox sends power both fore and aft to the front and rear axles.

With a points championship in last year’s TTPA points series, and consistent finishes towards the top of the class at such events like the Scheid Diesel Extravaganza, Tony is one of the few electronically controlled trucks that can run and even beat the big dogs. With changes coming that Tony hopes will add another 50 to 100 horsepower, expect for the Cheap Hooker to come out harder than ever next year, as Tony goes toe to toe with the Cummins-powered Dodges on the sled pull track. 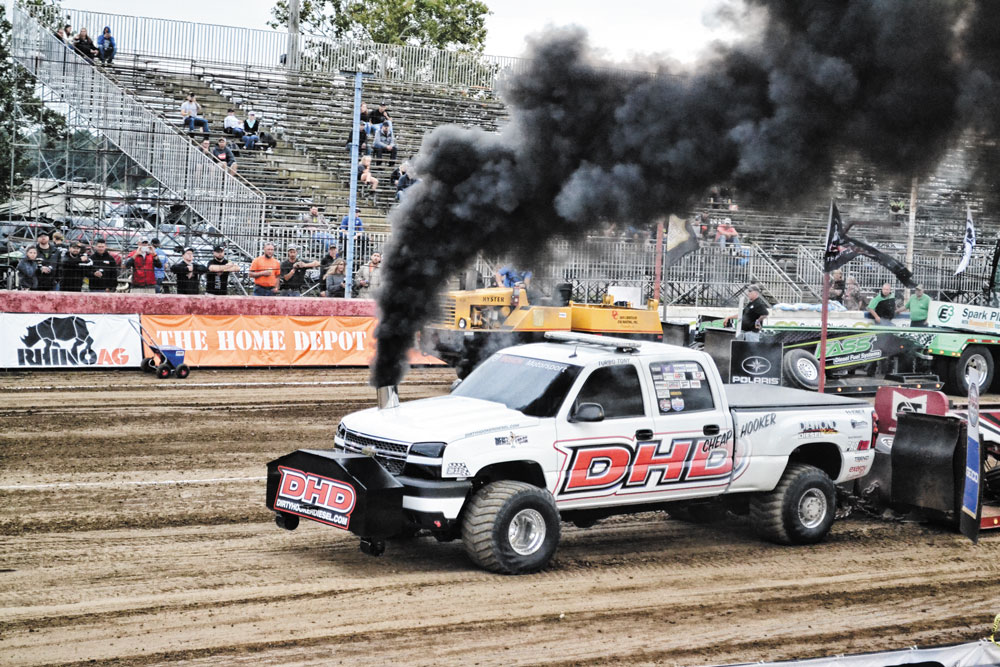