Despite being born more than a decade after his award-winning 1973 Ford F-250 Camper Special rolled off the assembly line, 26-year-old Ben Fluke of Bloomington, Indiana, knows each and every nut and bolt on the truck like he assembled it himself. This is largely due to the fact that he and his father Andy Fluke rebuilt the truck from the ground up with a frame-off restoration that started life as a simple project to have a nice-running daily driver classic Ford. Ben began work on a ’79 F-250 4×4 that was badly rusted, and after a three-year build it morphed into the finely restored 7.3L IDI Camper Special you see here on these pages. 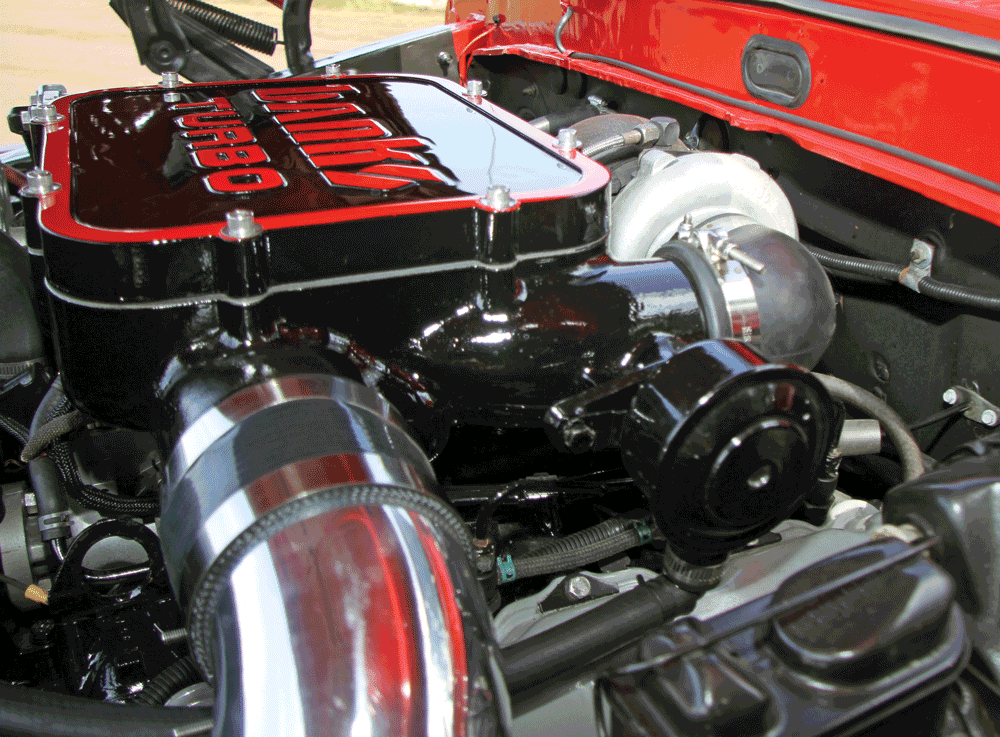 Ben’s ’79 truck was a gasser that was so badly rusted that only the radiator support and one door were worth salvaging. Fortunately, the chassis was still worth saving and he used it as the foundation for his project. After refinishing the frame, the Flukes cleaned up and installed the front and rear Dana 44 and Dana 60 axle assemblies from the ’79 with new Rough Country 4-inch lift springs as well as an add-a-leaf up front to give the truck a level stance with the heavy diesel engine up front. Rough Country shocks are on hand to tame the ride while 4.10 gears spin inside the differentials. The lifted chassis rolls on big 345/75R16 BFGoodrich Mud-Terrain T/A KM2 tires mounted on polished aluminum Mickey Thompson 16-inch wheels.

The 7.3L IDI (indirect-injected) engine came from an ’89 F-250 that Ben purchased for only $600. The engine ran fine and the rest of the truck was trashed, but the engine was all he wanted from it anyhow. He reworked the harnesses to wire the diesel engine into the gasser chassis, carefully soldering and heat-shrinking all the connections to have a conversion that looks factory and will last for many years to come. To make sure the engine would continue to run well, he installed a remanufactured injection pump and a new set of stock injectors and turned up the fuel screw 2.5 flats for some extra #2 when he needs it.

To keep the engine cool, Ben relies on the radiator from the ’79 truck that once cooled the 351M and the factory fan/clutch assembly for the 7.3L engine. He originally went with electric cooling fans from a Ford Taurus, but found the thermostat controls unreliable and went for the tried and true fan/clutch assembly.

Ben then fabricated new motor mounts and installed the engine in the chassis, and used the bell housing and flywheel from a 6.9L IDI engine and a clutch and pressure plate for a 351M gasser to link the engine to his NP435 manual transmission. The engine is just as detailed as the rest of the truck with powder coating and painting to make it look better than new.

After driving the truck without a turbo for a few years, Ben found a used Banks Power turbo kit for only $500 and installed it to wake up engine performance. He fabricated the new up-pipes and downpipe, and then had a local muffler shop complete the 3-inch exhaust system that exits the truck behind the rear passenger side tire. The Banks intake assembly was painted black with red accents to match the truck. With the turbo enhancement, he estimates that the engine is making somewhere around 185-200 horsepower with 360-390 lb/ft of torque, making for a great driver but not a racer or heavy-hauler.

With the engine and chassis complete, it was time to turn to the body and make something of the rusted shell he started with. Fortunately, Ben found the clean ’73 truck out of California with a blown engine and handed it over to Rick and Nic Robertson (his uncle and cousin) out of Ellettsville, Indiana, to straighten the body and lay on several layers of Victory Red paint. The red paint is offset by a black Rhino Linings spray-in bed liner, as well as hand-applied Hurculiner that Ben used as undercoating. He also installed new Ford chrome trim from LMC as well as an aftermarket chrome grille shell to complete the restoration on the body.

Moving inside the cab, Ben turned to Danny Aynes of Aynes Upholstery in Freedom, Indiana, to reupholster the original seats. The original (crack-free) Ford dash was retained and the factory gauges are used along with an ISSPRO tach to keep an eye on the 7.3L engine’s vitals. To make driving the truck more enjoyable, he installed a Custom Autosound aftermarket head unit in the dash that looks like an original push-button radio and fits the factory dash opening but controls a CD changer and has a USB hook-up for MP3 music files.

While Ben started out building his dream truck, he just wanted a good diesel-powered classic Ford to be his daily driver. But as he and his dad progressed on the build, it snowballed into the fully restored Ford Camper Special seen here. All of which shows that, with a lot of hard work and determination, you can build your dream truck without spending cubic dollars. He still drives the truck regularly, but admits that it’s now a fair-weather truck, and while he doesn’t panic if he gets caught in a storm, if there’s bad weather on the horizon he will generally keep the truck in the garage under its cover. The Flukes have been recognized for their hard work at the last two Scheid Diesel Extravaganzas, where this vehicle won awards as the Best Ford in 2012 and the Best Non-Production Truck in 2013. DW