Dodge Was Diesel Before Diesel Was Cool

The diesel truck bandwagon was not a big one in the 1930s. In fact, during the late 1930s, less than a thousand diesel trucks of all types were being sold annually by all manufacturers combined. Among the practical obstacles to on-road diesels were engines downsized enough to fit existing truck chassis, lack of infrastructure (fuel, repair facilities, etc.), initial cost and cold starting capability. Technology was gradually reducing these negatives and substantial fuel savings with diesels was making some operators take a second look. In 1939, gasoline was $0.16 to $0.19 per gallon, while fuel oil was $0.04- $0.10 per gallon. Plus, diesels were about 30 percent more fuel efficient that gas engines.

Exactly why Dodge decided to design their own diesel engine in the mid 1930s and enter the tiny diesel truck market is unclear. They didn’t have much initial competition but diesel power was definitely ahead of the popularity curve at that point. Still, the early bird does sometimes get the worm and they saw an open market. It’s obvious they began by licensing the Lanova Power Cell system from the Lanova Corporation, based in Germany but with a U.S. corporate arm. If you follow this column and Tractor Talk, you’ll know “Lanova” has come up many times. It was a pivotal element in the progression of four-stroke diesel power. Check out the illustration nearby to understand how it worked and why it was important. 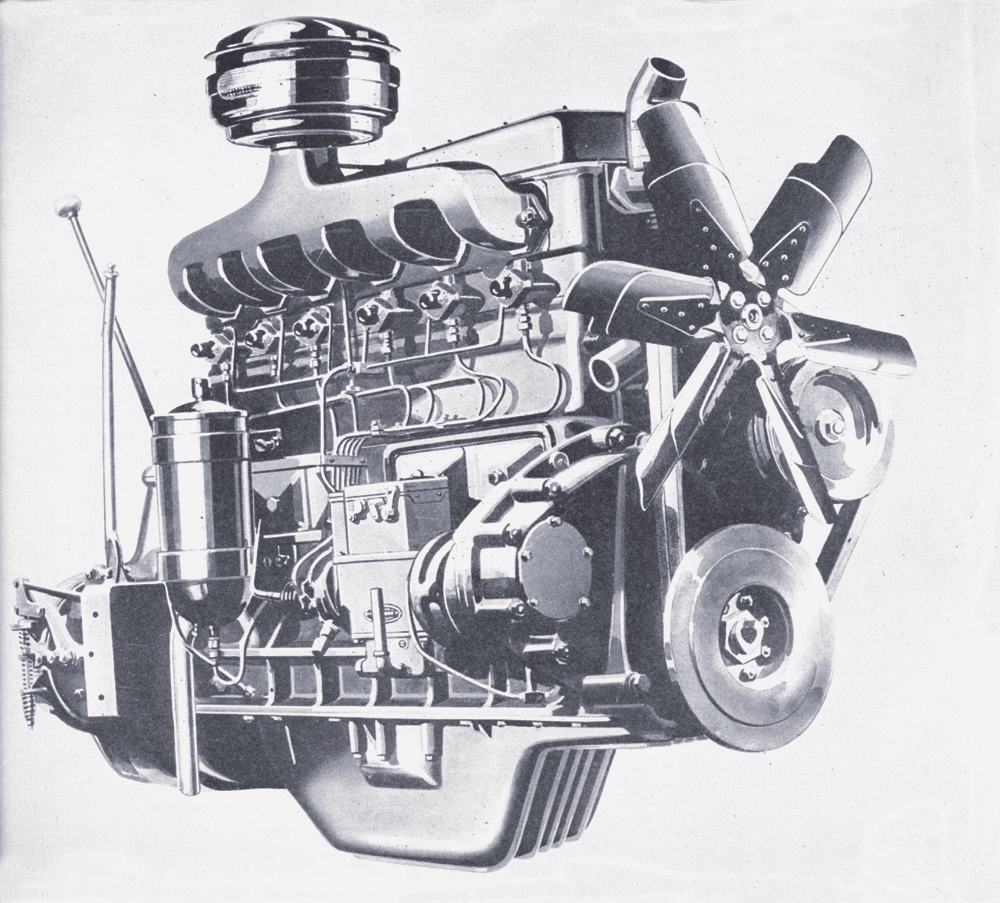 Period sources indicate Dodge began the development process for the diesel sometime in 1935. A 1939 SAE paper written by a Dodge engineer states they had five fully-developed test engines installed in trucks for operational tests by early 1938. It isn’t exactly clear if the diesel’s architecture was based on an existing gasoline engine or not. It’s clearly very similar to the 331 cubic inch, T43 Dodge HD truck block, a 100 hp flathead six with the same 3.75 x 5 inch bore and stroke. The T43 debuted for 1937 but the diesel was in development at the same time so they could have been concurrent projects.

The T84 diesel powered truck debuted at the December, 1938, NYC Motor Truck Show along with an updated T80 gasser. One of the key features of both engines was an almost identical lower end, featuring a beefy seven main bearing crankshaft with 2.31-inch diameter rods and 3.00-inch mains. Of course all the valve-in-block hardware was eliminated in the diesel but the blocks were still very similar. The diesel head featured the aforementioned Lanova combustion chambers, overhead valves, a 14.75:1 compression ratio, plus individual intake and exhaust ports for each cylinder. The head was well secured with six studs per cylinder and used hardened seat inserts for the Stellite exhaust valves.

…into the early 1950s, NOS Dodge engines, power units and parts turned up advertised in the backs of magazines

Beyond calibration, the fuel system remained the same on the Dodge diesels through their ’39-42 run. They used an Ex-Cell-O KB swash plate injection pump and single-orifice Bosch injectors that popped at 2,200 psi. The pump and camshaft were driven by gears and the pump could be timed via an access plate on the front cover. The engine was spun over by a 24-volt electrical system and the truck featured a heating coil in the intake manifold for cold starting. Dodge claimed the engine could start in 10 seconds or less at -10F.

Along the same lines, they road-tested two identical 3-ton Dodge trucks, one diesel one gas, and ran them together 37,000 miles over a variety of roads and terrain with capacity loads. The gasser averaged 3.74 mpg overall while the diesel delivered 5.23 mpg. On 6,000 miles of flat ground testing, the gasser averaged 4.2 mpg and the diesel 6.03. This data was used in a strong push to sell diesel trucks to a skeptical market… but then World War II came along.

From period advertising and truck manuals, we see the diesels offered in the ’39  2-ton TLD/TLDA line and the 3-4-ton TKD/TKDA, which were conventional cab trucks with four wheelbases from 152 to 205 inches. The “A” in model designation indicated a 2-speed rear axle. They were duplicated in the 1940 VLD/VLDA and VKD/VKDA models. They carried over again for 1941 as the Dodge WLD/WLDA and WKD/WKDA models. In ’42, mandatory war production had begun, so the model year was limited and the trucks retained the ‘41 designations. The Dodge 3-4 ton diesel truck line was duplicated under the Canadian Fargo banner from ’39-42 with different model designations and slightly different styling. After consulting  period Branham Automobile Reference Books and Dodge Serial number references, we could not find the T126 diesels offered in any Dodge trucks after 1942.

Chrysler Corporation had industrial and marine engine divisions so the diesel was also adapted for these applications. The company tended to divide them by referring to the truck engines as “Dodge Diesels” and the industrial applications as “Chrysler Diesels” (sometimes as “Chrysler Marine” or “Chrysler Industrial”). We found very little published on the Chrysler diesels until after the trucks were gone. A 1940 SAE paper mentioned that in 1939, Dodge diesels were used to power deep well farm irrigation pumps in Nebraska, pumping 1,300 gpm at 1800 rpm using 3.43 gph. Marine engines were also mentioned as being made available at this time but it’s clear the Dodge trucks were the focus into 1942 and the industrial side ramped up after.

When World War II started, much of Chrysler Corporation was mobilized for the war effort. There is a vague historical reference indicating the Chrysler diesels might have been considered in 1941 as a twin-bank tank power-pack. This obviously went nowhere and the more familiar and much more powerful 6046 twin-bank GM 6-71s emerged victorious as the designated diesel tank power-pack. It’s known some T126 diesels were purchased for government service and covered in a tech manual (TM 5-5406). The manual indicates some 600 power units (serial numbers IND-3-2000 to -2600) were purchased, but not how or where they were used. They were different than the civilian power units in some respects.

The power unit was designated IND-3 and generally rated at 60 hp at 1800 rpm but sometimes 80 hp at 2000. Known configurations included bare engines with no driven system, a direct belt drive and a shaft drive with a clutch. The marine versions were designated Type R in some publications and M-12 in the Chrysler Marine catalog, with various ratings up to 82 hp at 2400 rpm. They came complete with all the marine accoutrements; water cooled exhaust manifold, heat exchanger, raw water pump and reduction gears from 1.4 to 9.1:1. Little could be discovered on the extent of marine engine use, but we found Chrysler marine diesels were installed in boats built by Kettenburg Marine in San Diego. A surviving M-12 shows the serial number of 1,858, indicating at least 857 marine units were built. One surviving IND-3 industrial diesel has been found with a serial number in the 3,700 range, and considering the IND-3 serials also started at 1001, we now know at least 2,699 were made.

It appears the bottom fell out for the Chrysler diesels sometime in 1945 or 1946 but we found no information as to why. From then into the early 1950s, NOS Dodge engines, power units and parts turned up advertised in the backs of magazines like The Billboard  (a carnival magazine) at bargain prices. Chrysler must have had a “fire sale” and it appears equipment dealers all over the country bought them and tried to make a few extra bucks on the obsolete NOS engines. So ended the first Dodge diesel.

Today, there are only a handful of ’39-42 Dodge diesel trucks known to survive, plus a few loose engines and industrial units. Production numbers for ’39-42 Dodge diesel trucks of all types is listed as 606 units. We have no reports on how this engine performed, nor it’s record of reliability. On paper, it seems to be one of the better four-stroke diesel engines of it’s era. The engineering department of Chrysler Corporation was at a pinnacle of expertise and forward thinking in this era, but perhaps the Dodge diesel was too good and too soon for a market not yet convinced of the benefits of diesel power.  Still, Chrysler Corporation goes down as being virtually tied with Mack as the first truck manufacturer to design and build it’s own diesel engine.

 The last automotive iteration of the Dodge diesel was in 1942. Visually, there was nothing to mark the changes from 1939. The engine weighed a hefty 1,340 pounds but was only about 200 pounds heavier than it’s T124 gasoline brother. The automotive version was complete with a vacuum pump to operate the truck’s vacuum brake booster and windshield wipers. The engine cranked via 24-volts (four 6-volt batteries) but the truck electrical system was 6-volt. As a result, the engine had two generators, one 24-volt unit (the inner one driven by two belts) and one 6-volt (the piggyback, facing backwards), the belt for which also drove the vacuum pump. The diesel trucks used hydraulic clutches.