Performance And Reliability Upgrades For The 7.3l Power Stroke

Vincent Uriah is a concrete contractor from Summerville, Georgia, who purchased a used 2003 2WD F-350 with just over 120,000 miles on the clock. The big Ford is fitted with the stout and reliable 7.3L Power Stroke diesel and eventually the truck will be used for work versus play. As is the case with many small business owners, Uriah is feeling the pressure of mounting fuel prices and wanted to get more efficiency and performance out of his new/old work truck, so he has handed his rig over to the folks at Swamp’s Diesel Performance in LaVergne, Tennessee, for some upgrades.

Like most diesel truck owners, Uriah is upgrading his truck in stages and we’ll follow along with the build and the 7.3 Power Stroke horsepower increase as it progresses from a basic stock work truck to a high-performance work machine. First 7.3 upgrades up: an Airaid intake system, DiamondEye Performance turbo-back exhaust with optional polished stainless steel tip and a TS Performance chip loaded with Swamp’s Diesel Performance custom tunes to optimize the truck for everyday driving as well as for towing. 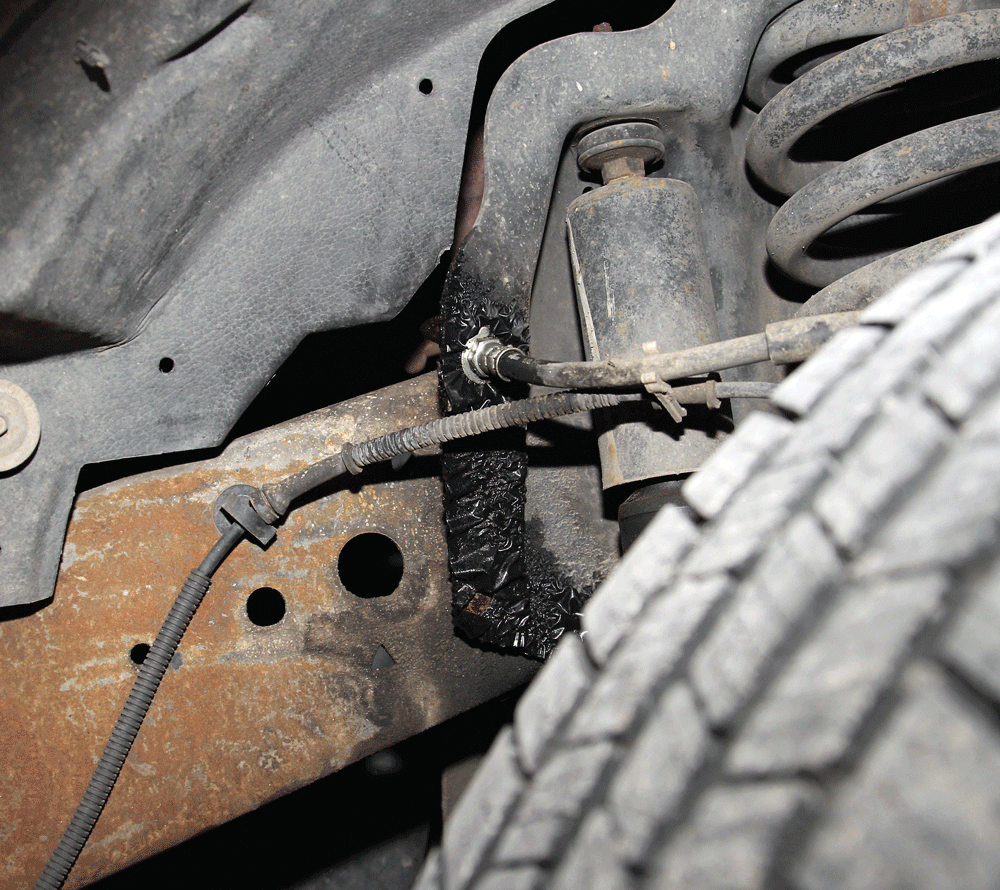 To improve the performance and efficiency of the Power Stroke engine the crew at Swamp’s starts by helping the engine to breathe more freely with a free-flowing cold air intake system. The Airaid intake system they installed features a non-oiled SynthaMax conical filter with more surface area than the factory panel filter as well as ductwork to channel cool outside air to the filter and block hot air from the engine compartment to make more power and increase efficiency on the inlet side of the turbo. On the exhaust outlet side of the turbo, flow will be improved by replacing the restrictive factory 3-inch diameter downpipe and 3.5-inch exhaust system with an aluminized steel 4-inch turbo-back Diamond Eye exhaust system that features mandrel bends to further enhance exhaust flow. The 4-inch-diameter downpipe has almost double the surface area as the stock 3-inch downpipe to allow the turbo to exhale spent gasses with ease.

With additional airflow you can also add more fuel to make more power, but that requires tuning of the PCM. Using a TS Performance six-position switchable chip the team at Swamp’s writes custom tunes to the chip to optimize performance for the owner’s desired truck operation that matches the performance modifications made to the truck. They can also re-flash the tunes to grow with the owner as he/she continues to modify and upgrade their truck. For Uriah’s current configuration with stock injectors and stock turbo, Robert Breedlove set up the chip with stock, high idle, economy, light towing (under 10,000 pounds), heavy towing (over 10,000 pounds) and extreme performance tunes to allow him to select the best option for his needs on the fly.

When we arrived at the Swamp’s shop, Chris Murra gave the truck a quick inspection before beginning the installation. Before beginning any modifications on your truck, it’s a good idea to give it a thorough inspection to make sure there are not any problems that need to be resolved first, especially if you just bought the truck used. Murra found a leaky brake line as well as worn steering linkage adding time to the work day, but adding safety to the truck at the same time. He also changed the fuel filter and leaking fuel bowl drain valve, and changed the engine oil and filter using a Motorcraft filter and 15W-40 Motorcraft diesel oil.

Based on Swamp’s vast 7.3L Power Stroke experience, the team estimates that stock trucks like Uriah’s ’03 put down about 200 hp to the rear wheels. With the new intake, exhaust and custom tunes on the truck, they estimate that it’s now capable of putting approximately 300 hp to the rear wheels. Bearing in mind that late 7.3L engines like this one use powdered metal rods rather than the stronger forged rods of the earlier 7.3L engines, Uriah’s ultimate power goal for his truck will be a safe 400 horsepower to the rear wheels with great drivability, efficiency and towing ability. He regularly tows heavy earth-moving equipment weighing in at more than 10,000 pounds with the truck.

The next step in the upgrade path for Uriah and his F-350 will be to beef up the stock transmission before going much further and adding more power, which would stress the transmission even more. After the trans upgrades attention will be turned back on the engine where the fuel system will be targeted for improvement to deliver even more fuel to the engine. Finally he’ll look to add some more boost by upgrading the turbo to wrap up his work truck project. Follow along with the progress right here in Diesel World over the next few months as the truck is transformed from a run-of-the-mill work truck to a tire-burning workhorse ready to tackle anything Uriah demands of it.

Driving up to Swamp’s shop the truck averaged 15.5 mpg with the stock intake, exhaust and factory tuning. Then on the trip back from Swamp’s following the same route at similar speeds the truck averaged 16.7 mpg, including many full throttle blasts to feel the effects of the additional power it’s now making. We expect that driven normally the mileage improvement will be even better. The throttle response is greatly improved and he says feels noticeably more powerful, especially when climbing grades. The big truck no longer feels labored under its weight, and we’re confident it will tow much better as well.

The intake and exhaust systems and even the PCM chip are products that the vast majority of diesel enthusiasts can install themselves in their own garage or driveway with basic hand tools. But if it’s beyond your skill level or you just don’t have the time to invest in performing the work yourself, we’re sure your local performance diesel specialist shop will be more than happy to perform the installation for you. DW