In 1998 at a tender 15 years of age, Brett Deutsch was given this 1969 Chevrolet C-10 pickup by his grandfather Chuck Deutsch. Grandpa Chuck owned the truck for 10 years and had installed a three-cylinder Detroit Diesel engine, but used it mostly for parades and hanging out with his buddies.

Brett and his dad Don Deutsch brought the truck into the family’s diesel repair shop in Elburn, Illinois, and went to work stripping it down to the chassis for a complete frame-off restoration, replacing rusted panels and installing the step-side bed from a 1995 Chevy. Don painted the chassis with a single-stage black and bathed the body in several coats of black base and high-gloss clear. To this day, the truck still looks great and sports the deep black paint that Don laid on the body 15 years ago.

While they were restoring the body and chassis, they pulled the Detroit Diesel in favor of a tuned-port Chevy 350 to satisfy Brett’s need for speed. The father and son team finished the truck before Brett turned 16 and got his driver’s license, but like most project trucks it was not really finished. After about a year of enjoying the truck, he saved enough money to purchase a Paxton supercharger to get some more power out of the small-block Chevy engine, but that didn’t last long as the combo blew up while he was racing a buddy in a muscle car.

After more gasser engines in the truck, he realized it was about as quick as it was gonna get and lost interest until 2008 when he came across an incomplete bus chassis with a new Duramax engine. Using a junkyard truck as a “guinea pig,” Brett determined exactly what modifications would be necessary to fit the Duramax engine and Allison transmission into his pride and joy without tearing up the restored truck. Then knowing what and where to modify, they went about installing the engine and transmission.

To keep the engine as far back in the chassis as possible, they cut the firewall and fabricated a new removable transmission tunnel. They also had to fabricate new engine mounts and widened the front of the frame rails to mount the bus radiator and intercooler. Since the truck was still going to be a daily driver, the Deutsches made new lines and installed the A/C compressor and condenser from his previous engine on the Duramax. They were able to shorten the wiring harness from the bus and make it work in the truck, marrying the modern diesel engine and transmission to the classic truck and gauges in a wonderful combination.

After driving and enjoying the truck for a few years, Brett once again decided he wanted to go faster and compete seriously in the NHRDA Pro Street Class. So the ’69 Chevy went under the knife once again with the main goal of reducing the weight of the 5,300-pound truck. He started with another frame and strategically boxed it with thinner steel than the previous frame and installed a Scott’s Hot Rod independent front suspension setup with double-adjustable coilover shocks and tubular A-arms. More weight was removed by replacing the bus radiator and intercooler with a custom Ron Davis radiator and custom Spearco intercooler.

“After driving and enjoying the truck for a few years, Brett once again decided he wanted to go faster and compete seriously in the NHRDA Pro Street Class. So the ’69 Chevy went under the knife once again with the main goal of reducing the weight of the 5,300-pound truck.”

up front to replace the bulky stockers while providing better braking on the street and at the track. He also ditched the stock front bumper in favor of a front roll pan and replaced the heavy power seats he had installed in the previous restoration with a pair of lightweight Corbeau race seats with RJS five-point harnesses. In the rear of the truck, the steel 20-gallon fuel cell was upgraded to an aluminum cell for better safety and less weight. Brett even scraped the Rhino lining out of the inside of the bed and repainted it with classic trunk paint to shave a few more pounds.

He did add weight to the truck with a six-point chromoly roll cage to keep him safe if things go wrong at high speed. To keep the truck daily drivable, the cage features swing-out door bars on both sides. When racing, Brett removes the passenger seat and replaces it with a laptop mount, but on the street he runs a pair of seats along with a set of wheels wrapped in street tires to make the truck legal. In race trim, the truck weighs in at 4,650 pounds, meaning he managed to shave 650 pounds off the truck during its latest transformation.

Initially, the Duramax engine was backed with an Allison transmission and had made a best 1/4-mile pass of 9.8-seconds at 145 mph. Brett felt that his engine was making more than enough power to push the truck faster and after analyzing the data logs felt that the Allison was holding back some of the engine’s potential. After researching transmission options and speaking with Brian Thompson at Brian’s Truck Shop in Lead Hill, Arkansas, he decided to have Thompson build a 4R100 for the truck since it would not defuel the engine to shift as the Allison did. With the 4R100 transmission installed, Brett has run his best 1/4-mile pass to date of 9.43-seconds at 148 mph with a relatively mild tune on the engine.

When the LLY Duramax was first installed in his truck, Brett used the stock long-block with a few enhancements and upgrades including a set of head studs, 50-percent over Exergy fuel injectors, Danville Performance modified LBZ CP3, Danville Performance 68mm VGT turbo and an AirDog lift pump. The package was tied together using tuning from Danville Performance and delivered 702 horsepower to the rear wheels on the dyno propelling the C-10 through the 1/4-mile in 11.2 seconds.

While 700 horses and low 11-second ETs are nothing to sneeze at, Brett knew he could get more out of the truck so he fabricated a compound turbo kit and added a Danville Performance S480 to work with his existing 68mm turbo. This brought the power up to 768 and dropped the ETs down to 10.6 seconds, but while trying to break into the 10.5-second range and pushing the engine to its limits he found a major limit, bending all eight of the stock connecting rods.

“Initially, the Duramax engine was backed with an Allison transmission and had made a best 1/4-mile pass of 9.8-seconds at 145 mph.”

For the rebuild Brett brought the engine down to Danville Performance and worked directly with Mark Broviak to build an engine that would be drivable on the street but also make a lot of power to go fast at the track. They used the stock Duramax block and crank but added strength with a girdle and billet main caps. Carrillo rods swing a set of Mahle prototype pistons with John Fingers’ custom bowl work. The engine is topped with a pair of SoCal Diesel Stage 1 cylinder heads and a SoCal 3388 camshaft actuates the valves.

Brett also took the opportunity to upgrade the turbos installing Danville Performance 72mm VGT and S483 turbos to make more power than before. Then, to make sure the engine has plenty of fuel, he installed a PPE Dual Fueler CP3 setup with a Wehrli Custom Fab billet pulley to feed the Exergy injectors that are now bumped up to 175-percent flow capacity. The truck is currently making more than 1,100 horsepower on the dyno while spinning the tires on the rollers and has pushed the truck to a best 1/4-mile pass of 9.43 seconds at 148 mph, but Brett hopes to drop the times further with some more work and fine tuning.

With his speeds quickly approaching the 150-mph barrier, Brett also built a removable parachute mount using a DJ Safety parachute. The parachute assembly mounts behind the license plate and can easily be installed for track activities on weekends and then removed for driving on the street during the week.

To put the power to the ground the truck now has a Mark Williams 11-inch rear end out of a Pro Mod car using a set of 2.91 gears and custom Mark Williams axle shafts. The axle housing is held in place in the chassis with a four-link setup fabricated by Brett. Initially, he used a Dana 61 rear axle that worked great on the street, but didn’t hold up to the Duramax power on the track. He also ran an 11.5-inch AAM axle before upgrading to the Mark Williams setup. The rear axle is linked to the 4R100 output through a custom-built 5-inch diameter aluminum driveshaft to provide good strength while keeping weight down.

When the truck is at the track it rides on a set of skinny Mickey Thompson 27.5/4.5-15 ET drag tires wrapped around 15×4-inch Weld Pro Star wheels up front and Hoosier 29.5/11.5-15 drag slicks mounted on 15×14-inch Weld Pro Star wheels to provide plenty of traction in the rear. Brett has another set of Weld Pro Star wheels for street use with 205/70R15 tires up front and Mickey Thompson 29/15R15 meats in back that he switches to so that he can drive on the street. Living close to work, he frequently drives the truck as his daily commuter using a street tune for the engine. 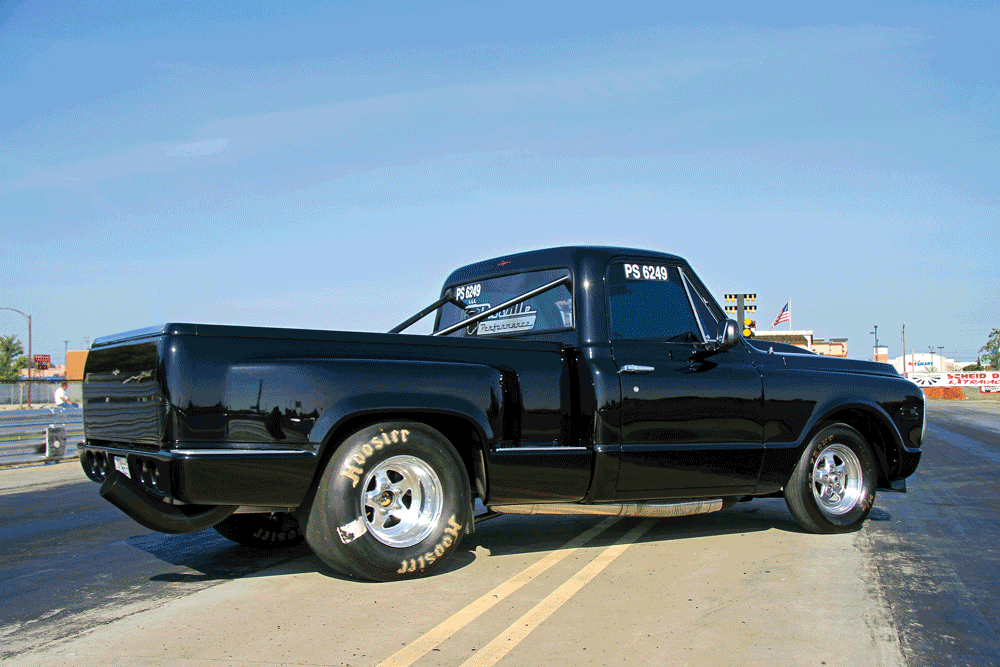 Brett’s grandfather Chuck used to come down and watch him work on the truck as it progressed through its various builds and rebuilds until he passed away in 2011. We’re sure if Chuck were still here he’d be darn proud of what the Deutsch boys have managed to do with his little old Chevy! Not only is it a great-looking truck that can cruise down to the local hangout with ease, it’s also a beast on the track. It can lay down mid to low 9-second quarter-mile times, making this one-of-a-kind truck a truly rare machine on the street or on the track. DW