Every once in a while, there’s a truck that just stops you in your tracks. Whether you’re a Ford, Chevy or Dodge/Ram fan, there are certain trucks that just capture everyone’s attention. A top fuel diesel?
Yeah, that ought to do it. The carbon fiber body 2006 Chevy on these pages is the brainchild of diesel enthusiast Brian Spooner, who hails out of Lloydminster, Saskatchewan, Canada. Brian enlisted the help of good buddies Jamie Stojanowski and Curtis Halverson to build this monster, which is unlike anything the diesel world has ever seen.

Let’s start with the basics. Most engines that come in production pickups are in the 5.9L to 7.3L range, while this engine displaces 511 cubic inches, or 8.37 liters. What’s more is that it’s based on a Top Fuel Dragster engine, so it’s extremely stout and a lot lighter than most other diesel engines out there. The aluminum engine block is based on a Brad Anderson Engineering (BAE) design, and is filled, fire-ringed, and has ARP fasteners on both the main and heads. A Bryant crank swings a set of BME aluminum rods that are attached to a set of custom-made 13.8:1 compression ratio BME pistons.

“The big supercharger is 234-percent overdriven, and sends 60 psi of boost
to the engine”

Where things really start to get interesting though, is at the cylinder heads. The four valve per cylinder heads are based off of a blank design and feature huge flow numbers, shaft-mounted rocker arms and were custom-made specifically for this engine. A 12-month project by Curtis Halverson at Extreme Racing Engines, they were the key in making the engine, well, a diesel.

Another area where Brian’s truck differs from most is in the induction department. On virtually all diesels, you’d normally find a turbocharger, or maybe two, but on this custom-built powerplant, a PSI 206D screw blower sits atop a Stage V top fuel intake manifold. Flowing an incredible 3,500 cfm (or about the same as a 100+mm turbo) the big supercharger is 234-percent overdriven, and sends 60 psi of boost to the engine. The rest of the power plant is just as exotic, with two 12mm stroker CP3 pumps from Exergy Engineering, mammoth 500-percent over Duramax injectors that were adapted to the application, and a Bosch Motorsports stand-alone ECU that controls the engine’s injection system, handles data logging, and performs a myriad of other tasks. Tuning is handled by Andrew (S&S Diesel) and Jaime (J&R Automotive). 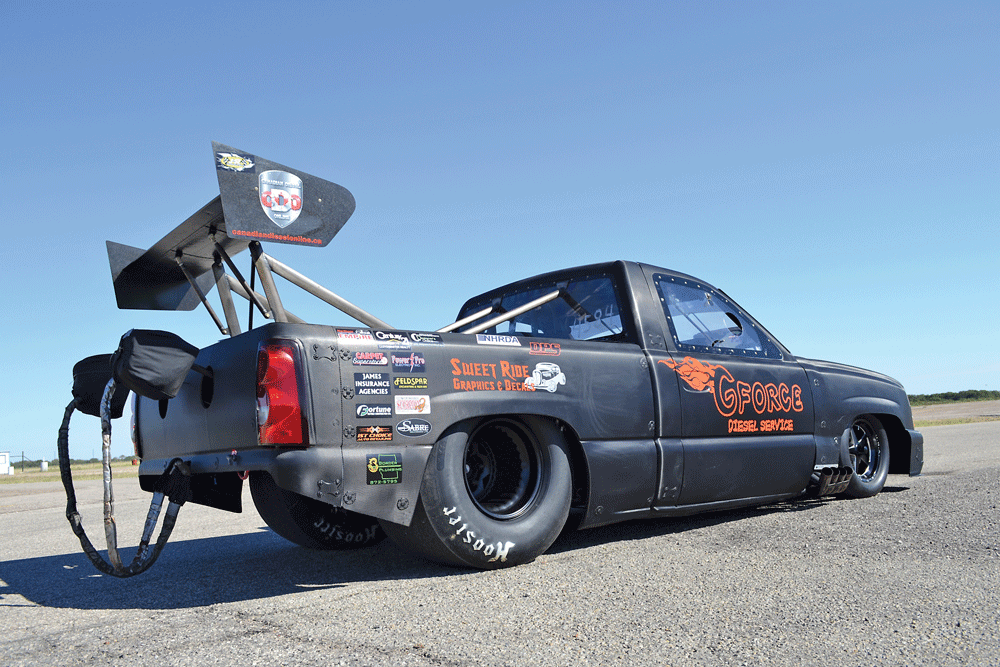 The transmission that’s built to handle the engine’s estimated 2,000 horsepower and 3,500 lb-ft of torque isn’t your average diesel gearbox. Built by B&J Transmissions, the three-speed transmission is most commonly used on Top Alcohol dragsters, funny cars and other top-tier drag cars. The planetary gear transmission is also able to use either a clutch or converter to mate it to the engine. In this case, Brian and company chose a custom 2,500-stall Precision Industries torque converter, that’s well suited to the blown diesel’s instant throttle response. 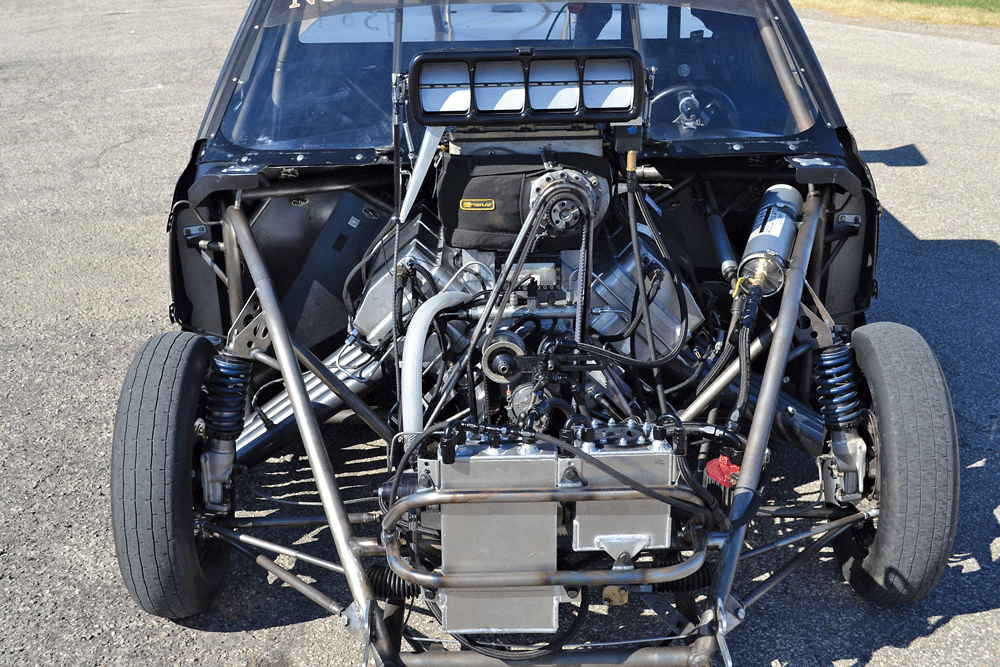 The philosophy of using the best parts available extends to the chassis, suspension and body and not just the drivetrain. The body is made completely out of carbon fiber, and helps reduce the truck’s ready-to-race weight to a mere 2,850 lbs. The chassis is a double-frame rail design that will certify to 6.0 seconds in the quarter-mile, constructed out of chromoly steel, and was built by Brad Hadman.

“The chassis is a double-frame rail design that will certify to 6.0 seconds in the quarter-mile.” 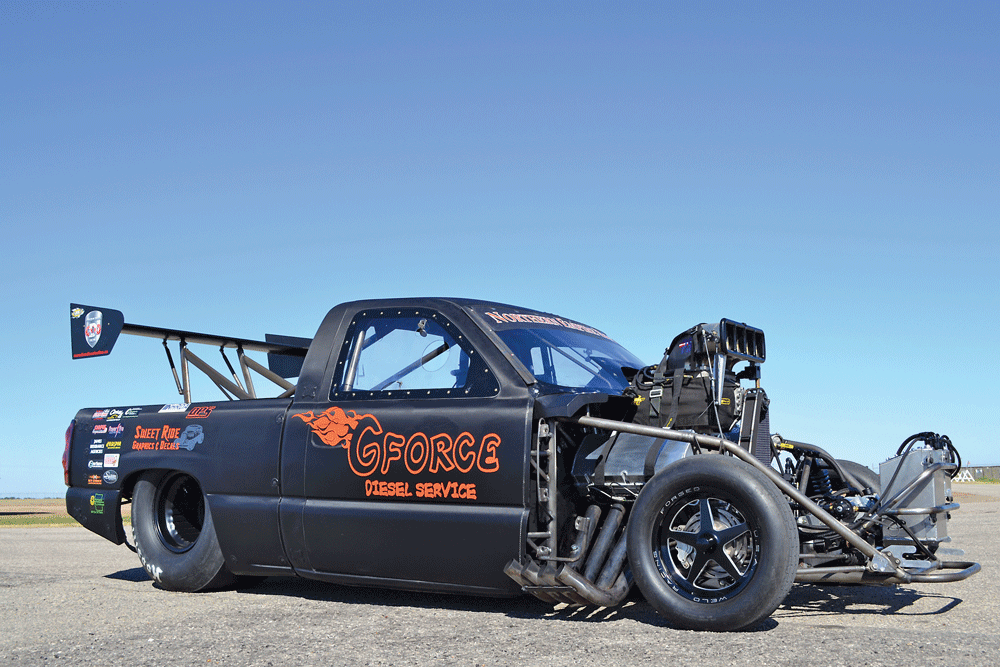 If you’re thinking that the rearend ought to be incredibly strong in order to handle the engine’s 3,500 lb-ft of torque, you’d be right. The fully braced custom-fabricated rear axle was built by Scribner, and features a lightweight aluminum center section, 40-spline axles, and diesel-friendly 2.91 gears. Brakes on the rear are from Strange Engineering, just like they are on the strut front suspension.

After hours of pouring over the details of the truck, we were deeply impressed with the level of skill it took to build such a ride. Unfortunately, a broken rocker sidelined the Chevy in its first outing, so we’ll have to wait and see if Blown Smoke can crack the NHRDA’s existing 7.46-second Pro Stock Truck record. In the meantime, our hats are off to Brian, Curtis, and the entire J&R Automotive crew for pushing the performance envelope like never before. DW