Home PEP IT UP

SIMPLE BOLT-ONS FOR THE L5P DURAMAX

GM hit quite the home run when they released the new 6.6L Duramax and Allison transmission combo in their 2001 model year trucks. It was exactly what the bowtie fans had been screaming to get for years. The 6.5L Turbo Diesel they ran through the 1990s had been left in the dust after Dodge and Ford upped their game with the 12V Cummins and 7.3L Power Stroke engines. Since 2001, the Duramax powerplant has been a force with which to be reckoned. Through every engine revision, as the use of electronics and their abilities grew, the platform continued to push the light duty diesel market with cutting edge technology that offered power and torque while maintaining great mileage and quiet, smooth-running engines.

In 2004, they released the first full production run of emissions-equipped Duramax, the LLY, which had its own EGR system. Then came the LBZ platform in 2006, which took what they learned about emissions equipment and the platform itself and improved on it in every way. Some still consider the LBZ to engine to be the best of the Duramax to this day. Late 2007 brought a new era in diesel, with ever stricter emissions requirements leading to the introduction of the Diesel Particulate Filtration exhaust systems and the LMM. While the LMM engine itself was very similar to the LBZ, it was strapped down with an even larger EGR system and the all new DPF system, which would trap soot and burn it off in the filter every couple hundred miles. The LMM had its problems (most of which revolved around that emissions equipment), so in 2011 GM released an all new platform called the LML, which came with the introduction of Urea injection to the exhaust system to help further reduce emissions. The LML was used until 2016 with much success, though some owners experienced CP4 injection pump issues and Urea system problems.

So, in 2017, when the news got out that GM was releasing a completely, from-the-ground-up, brand-new Duramax engine, the market was ecstatic. Dubbed the L5P, the engine released in the 2017+ trucks came with a completely redesigned injection system, a completely brand new turbocharger design, beefier internals, better cylinder head designs, better cooling capacity, and, of course, higher horsepower and torque output. The L5P looked to be the answer every Chevrolet and GMC fan was after. The OEM engineers pulled out all the stops and really produced something special in the L5P, and now two years into their production, there aren’t many owners of L5P’s you’ll find with complaints. The trucks interiors are spot on, the available technology makes every creature comfort amazingly nice and that sixspeed Allison transmission works flawless for towing. With all that said, of course, we’d be happy to point out a few nit-picky items with the L5P. One: dead pedal. Two: that ridiculous exhaust outlet.

While GM engineers have done a great job with the L5P, they also did their absolute best to lockdown that engine control module tighter than Fort Knox. They have made it virtually impossible to crack into that ECM and allow the aftermarket to modify the fuel mapping and reprogram the engine for improved performance like so many diesel owners are accustomed to. Tuning or ‘chipping’ an L5P computer is a bit of challenge. It’s possible, but right now it’s extremely expensive and you can kiss that warranty goodbye.

Also, if you’ve ever driven an L5P you may notice the slow response to throttle pedal input. For whatever reason, the GM engineers have created a bit of a delay in what happens with your foot and soon the engine reacts to it. Even through the trucks have gobs of power on tap, when leaving a stoplight with a heavy load, you may notice some hesitation from the truck before you really start to feel that. The guys at Edge Products have been in the engine tuning game just about as long or longer than anybody and wanted to help those owners fed up with the ‘dead pedal’ feeling.

The Amp’d Throttle Booster is their easy fix, and just about anyone can install in less than 20 minutes with no tools required. Best of all, it will completely remove that dead pedal feeling without actually touching the truck’s ECM or affecting your factory warranty. The Amp’d module just adjusts the vehicles pedal position sensor to better control engine fueling by remapping the throttle pedal range. You’ll have the option of three different sensitivity levels so the engine will react sooner to throttle input and get you into the power curve sooner. So, while it won’t increase horsepower, you’ll get to use what power you have when you ask for it—not when GM’s engineers thought you’d want it. 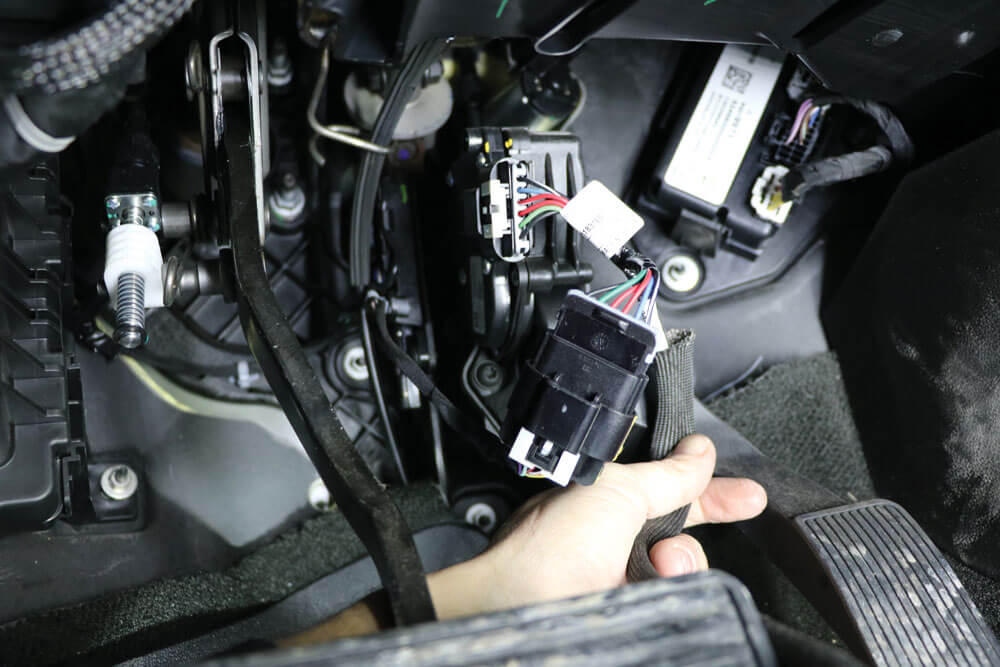 Now, onto another issue: the eyesore GM calls a tailpipe. While the vented tip is a necessity on these emissions-equipped trucks, why should you be forced to drive around with a trumpet sticking out from under the rear bumper? Sure, we totally understand why the exhaust outlet needs to be cooled by the outside ambient air before it actually exits the exhaust system, but you knew the aftermarket would have some better-looking options for the L5P, and the single-side exit, dual-5-inch-tip from MBRP was just the ticket for this 2017 Denali.

MBRP’s Pro Series exhaust is constructed of T304 stainless steel for years of durability and stylish looks. This system will outlast the factory exhaust while being easy to clean and keep looking nice even in winter climates. On the L5P trucks, the DPF-Back system is simple to install, with the toughest part of the job being cutting the factory system just behind the DPF so the new tailpipe can be slid on and clamped into place. Everything fit like factory and lined up perfectly with the factory hangers and exhaust sensors. This particular kit included two 5-inch, polished stainless tips that will mount side-by-side under the passenger rear fender. With the vented outlet pipe, the exhaust exit temperatures are still reduced to a safe range, and the polished tips look incredible in place of the factory 5-inch trumpet. 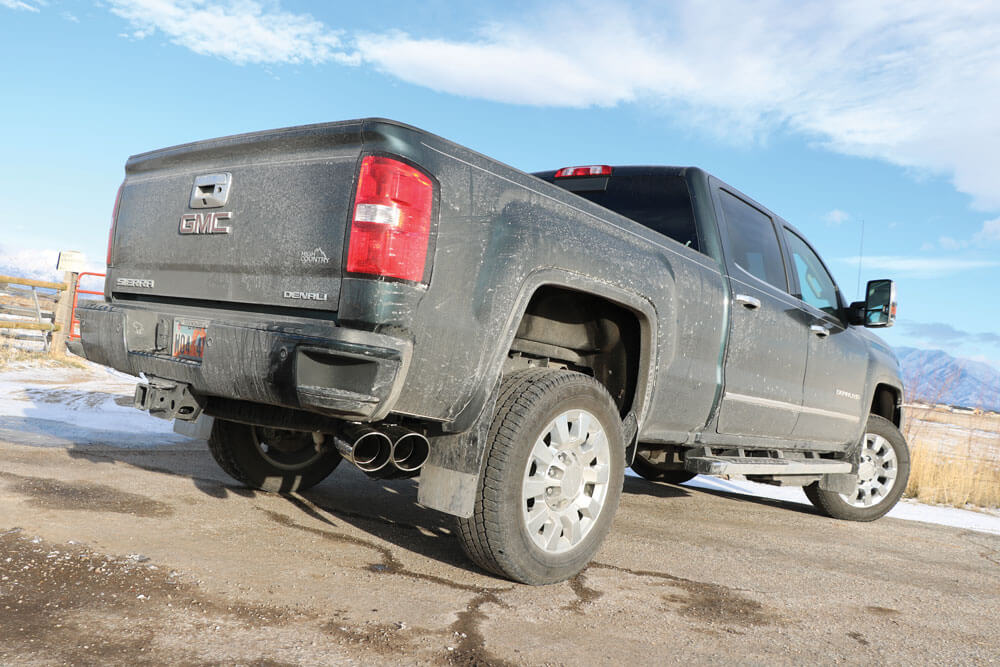 On this particular truck, which is used primarily for towing, a large 38-ft RV fifth wheel allows quicker throttle response in the Amp’d module. It essentially helps get into the desired torque band sooner, making passing on the freeway a breeze and leaving a stop sign loaded a little more responsive. While the MBRP system was done more for cosmetic reasons than anything else, it’s notable that the new tip placement worked out better with the hitch-mounted mud flaps the owner runs while towing, since the factory tailpipe was dumping at the bumper and had actually burned through the right rear flap. The dual 5-inch exit does really improve the look and stance of the truck, going well with the other chrome styling cues on this Denali. The best part to these parts though? Everything was installed in less than an hour—in a home garage—with nothing more than basic hand tools and a Sawzall. How can you beat it?