Pushing the limits of a stock engine is what diesel performance is all about. Unfortunately, some of us find out sooner rather than later exactly how much abuse a factory rotating assembly can handle. With a set of big hybrid injectors and an S369 SX-E bearing down on it, the 190,000-mile, stock, bottom-end 7.3L Power Stroke in David Keyser’s ’97 F-250 decided it’d had enough just eight minutes after being started. But instead of throwing in the towel, David decided to pull the engine, overbuild it, and enjoy his horsepower upgrades reliably.

To ready the 7.3L for maximum longevity, the block was sent to the machine shop side of the local Ford dealer, where it was prepped to accept a main cap girdle and valve-relieved, standard bore pistons, both of which came from Irate Diesel Performance. The rest of the rotating assembly would consist of the factory-based crankshaft and Manley Performance’s forged-steel rods. With the block at Ford, the heads took a trip to Crutchfield Machine for light port work and a performance valve job. Complementing the added airflow of the heads is a Stage 2, billet drop-in camshaft from Colt Cams, while ARP studs make blown head gaskets a non-issue.

After pulling the 275cc injectors that contributed to the bent factory rod, David shipped them to Full Force Diesel to be converted into 350cc units. Equipped with 200-percent over nozzles, the 350/200 hybrids are capable of supporting more than 700 rwhp with the right air and tuning. The big HEUI sticks receive their high-pressure oil supply from a Swamps Gen3 mounted over the factory 15-degree HPOP, and ICP stays in check even with aggressive, dyno-proven tunes from Jelibuilt Performance in the mix. On the fuel supply side, an Irate Diesel electric system designed specifically for the OBS allows David to keep using both factory fuel tanks. The Irate kit entails a Walbro pump, Baldwin filters, and a regulated return system.

Packing the cylinders full of air is an off-the-shelf S472 SX-E from BorgWarner. The 72 mm forged milled wheel charger features an 87 mm turbine wheel, a 1.0 A/R exhaust housing, and produces as much as 55 psi of boost. Made to work using one of Irate Diesel’s T4 turbo mounting systems, it sits on a T4 pedestal at the back of the valley, with stainless steel up-pipes feeding the turbine and 3-inch intercooler pipes routing boost to and from the intercooler. A pair of 3-inch inlet intake plenums (also from Irate) introduce plenty of air volume into the massaged heads. 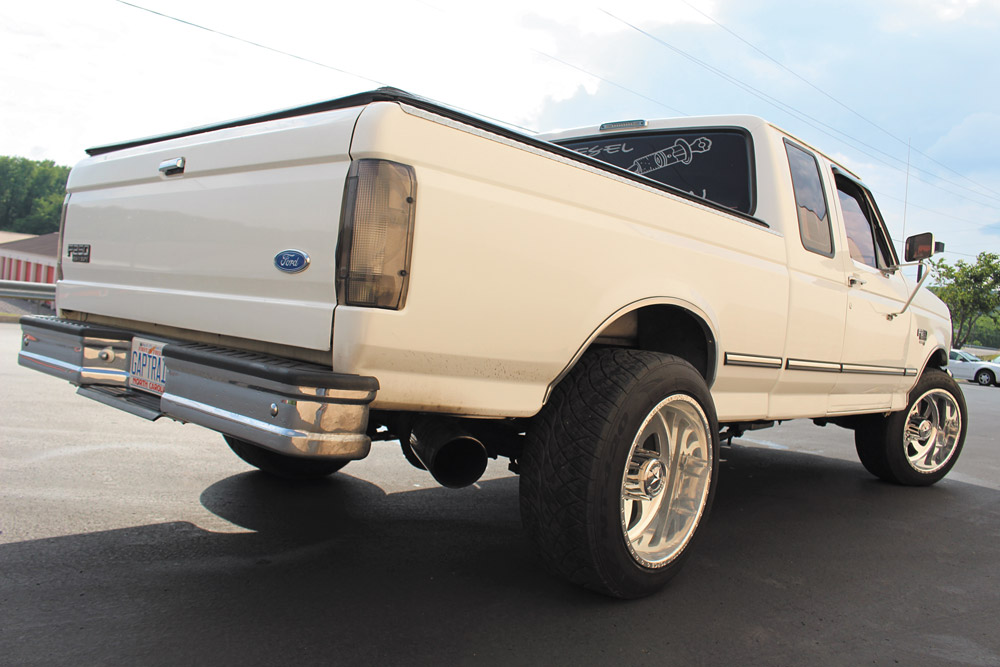 With Allison rebuilds being a part of his regular duties at work, David was anything but intimidated by beefing up the E4OD in his F-250. He got started by installing all steel planetaries, added a billet input shaft, and then stacked Alto clutches. The valvebody was set up by the folks at Twisted Diesel, and a flow-through transmission pan from Derale Performance was added for improved cooling. Currently, a 1,700-rpm stall triple disc converter from RevMax handles power transfer, but David plans to have the stall speed bumped up to 2,100 rpm in the future. The looser converter should help bring the S472 to life a little quicker.

Being that David’s OBS is two-wheel drive, traction can be hard to come by on street tires, and he tells us that even with a soft launch, the truck “wrinkles the tires at the 60-foot mark.” To date, he’s yet to get a clean pass at the track, but the truck has laid down just under 700 hp on the dyno. Once he’s able to get the lightweight Ford to hook, high 11s should be the norm. In the meantime, David is always down for a roll race, where his OBS is capable of hurting a lot of feelings. Trust us, it doesn’t take long for other would-be racers to realize his truck is packing more than pretty wheels, a 4-inch exhaust, and a chip…