In every walk of life there are people who work in the background and just get stuff done. Nothing about them or what they do is spectacular or grabs headlines, yet what they accomplish is often vital in some way. No doubt they should be thanked more, but these folks know the important part they play in the world and that’s generally enough for them.

The Massey-Ferguson 271 was introduced in 1998 as an upgrade on the long-running M-F 200 series line. Built in Coventry, England, this has been a popular line of light tractors that has helped carry M-F through many rough times.

The roots of Massey-Ferguson go back to 1800s Canada when the Massey and Harris companies, each a builder of harvesters and other farm equipment, ended their knock-down-drag-out competition in the farm markets of the British Empire by merging. After a number of years rebadging tractors from other manufacturers, in 1930 they began making their own under the Massey-Harris nameplate and achieved a good measure of success all over the world.

“A REASONABLY PRICED TRACTOR THAT COULD GET THE JOB DONE RELIABLY FOR DECADES.”

In 1953, M-H merged with Ferguson Tractors. Harry Ferguson had been the brains behind the Ford-Ferguson tractors of the late ’30s that had advanced FoMoCo greatly in the tractor biz. But putting Henry Ford and Harry Ferguson in the same room was a lot like mixing matter with antimatter and their agreement exploded in 1946 with a megaton rating the entire ag industry felt. The M-H/Ferguson merger would put both companies onto a smoother path but Ferguson, being Ferguson, was typically difficult on the price. In the end, they settled the price question with a toss of a coin. M-H won the toss. The integrated company became Massey-Harris-Ferguson, with both Massey-Harris and Ferguson branded tractors being produced until 1957. Ferguson was chairman of the board at M-H-F until that year, when arguments over a particular model caused him to leave in a huff. The model lines were then blended and the company name was changed to Massey-Ferguson Limited. At nearly the same time, M-F acquired Perkins and that’s why M-F historically used Perkins diesels… but that’s another story.

Massey-Ferguson plugged on through the ’60s and ’70s and did well, but the recession of the late ’70s and early ’80s hit the company hard and its market share gradually declined. That decline eventually resulted in its sale to AGCO, but the time-honored Massey-Ferguson name endures under that banner.

When the 271 debuted in 1998, it was a continuation of the 200 line that had debuted in 1973. From ’73-83, it was built-in Southfield, Michigan, but when that factory was closed in 1982, production was moved to the M-F plant in Coventry, England. The 200 was M-F’s small utility line and one of the company’s backbone products. It evolved, but remained in the 50-60 PTO hp range. With MFWD, shuttle transmissions, integrated loader options, and a line of M-F branded implements, it was a money-maker for the company and sold the world over.

By the late ’90s, the 200 line was much the same tractor in spirit as it ever had been. For ’98, the “One Series” debuted in the 200 line. The engines had grown in size and the 271 had a naturally aspirated 243ci Perkins New 1000 Series engine that made 59 PTO hp and 65 flywheel hp. The PTO rating is from the manufacturer, as this tractor didn’t get a Nebraska test. The Perkins was backed up by an 8-speed mechanical transmission with a differential lock. A shuttle shift and MFWD was not offered in the 271, but in the next version up, the 281, which was largely the same tractor but with a larger (256 ci) and more powerful engine that made 69 PTO hp (75 flywheel). Other 271 features included a folding ROPS, Category II three-point hitch, spring-suspended seat with armrests, power steering, and wet brakes. A canopy was optional and fitted onto the ROPS. 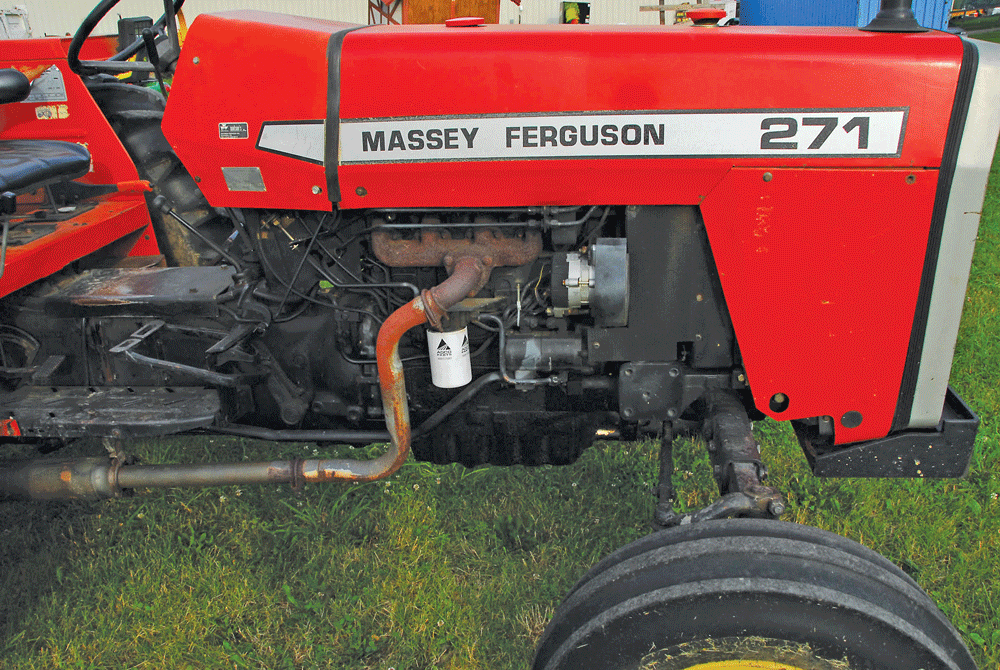 The 271 was upgraded with the 271XE, which used a smaller 236ci Perkins engine to make the same power. The 271XE was built through 2002 and then the 200 Series went away, replaced by the 400 Series. All in all, the 271 was not a tractor that would draw many second looks, but a reasonably priced machine that could get the job done reliably for decades.