Last Scream of the Jimmy

In 1954, when Oliver needed a powerful diesel to one-up their competitors, they went to General Motors. The Detroit Diesel Division built some of the most lightweight and compact, yet very powerful, diesels on the market at the time and more than a few tractor manufacturers went that route in the years between 1950 and 1970. The 1954 Super 99 GM was powered by a General Motors 3-71 and made 80 horsepower on the PTO. That was BIG power for ‘54. The Super 99 GM lasted through 1958 as a step above the 65 PTO horsepower Super 99 Diesel powered by the familiar Waukesha-built, Lanova cell six-cylinder.

GM power continued through the evolution of the Oliver tractor line in the ‘50s as the high-power alternative over the Waukesha engines. The ‘59-61 990 and 995 GM both were Jimmy-powered, again with the 3-71. Power was up a little and those tractors were restyled and improved but the big news came for 1960, when the 1900 debuted. It featured many improvements, not the least of which was the update to the recently introduced 4-53 four-cylinder Jimmy. It was almost exactly the same displacement as the 3-71 (213 ci vs 212), having more, but smaller displacement cylinders.

For 1965, the Oliver 1900 was revised into the 1950. It’s counterpart was the 1850, which was essentially the same tractor powered by a six cylinder… either a Waukesha gas or propane, or a Perkins 354 (93 PTO hp). This was the era when Oliver certified the power on their tractors. Essentially, Oliver promised their tractor would deliver no less than their certified power. Each tractor was dyno tested to produce at least the minimum advertised power. If they didn’t, they were tweaked or repaired until they did. Oliver had been doing that for a long while but starting with the 50 series, they advertised the fact and applied a decal that showed the actual power reading and the signature of the dyno tech. Not coincidentally, those numbers closely matched the Nebraska ratings. All this inspired a fair bit of trust. 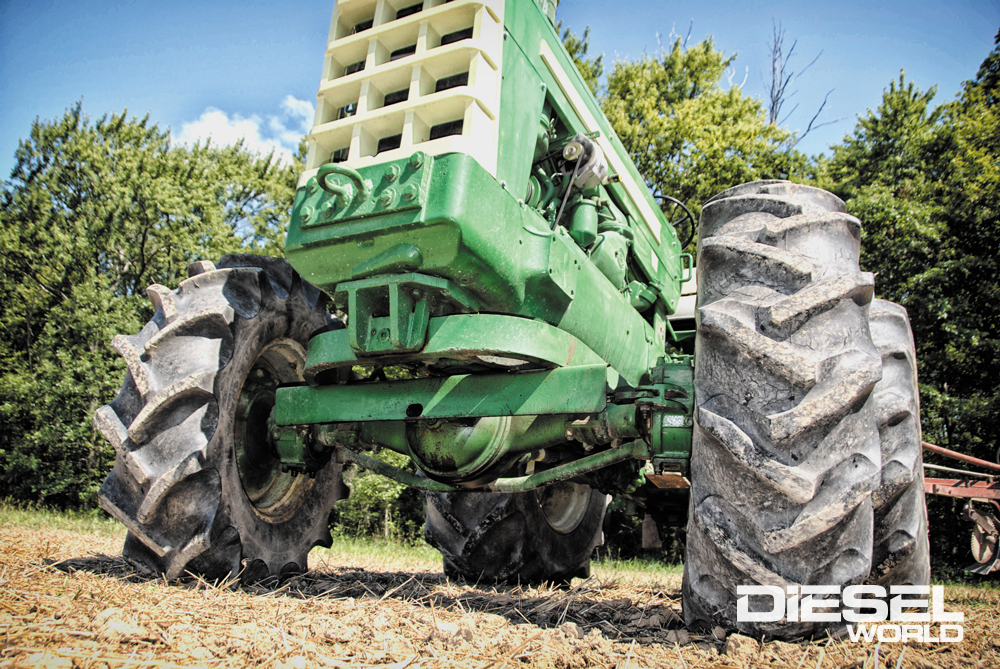 The 1950 series was offered in five variations, a fixed tread standard/wheatland, a riceland, two versions of a row-crop (narrow or adjustable wide front) and a four-wheel drive. There was also a commercial version that came in yellow, so it could be called a sixth variant. The 4-53 had been tweaked by this time to produce 105 PTO ponies and as a result, Oliver could brag that it had the most powerful row-crop tractor on the market. Of course, Oliver faced the same limitation as everyone in that era.. putting that power to the ground. Tire technology was advancing but at this time, being able to use 100 horses on a rear drive only tractor could be problematic. That’s where the four-wheel drive tractors came in.

The 1950 used essentially the same front driving axle technology as had the 1900, namely a Clark axle and a take-off from the transmission to power it. The front axle ring and pinion ratio and tire size was carefully matched to provide even pull, so that limited tire size choices to only a few, one being super wide Goodyear Terra Tires.

The tractor could be operated for long periods with the front axle engaged, or in rear drive only. The 1900 and 1950 heralded the high-power, non-articulated tractors that have come to dominate the market these days. Oliver also debuted a Levy hydraulic front drive axle option in this era for use in times when only occasional traction help was needed. They hydraulic pump was driven of the front of the engine and a pair of hydraulic motors drove the front wheels. It worked well but was expensive and didn’t sell well. If a farmer needed more traction, the mechanical system wasn’t much more expensive than the Levy. 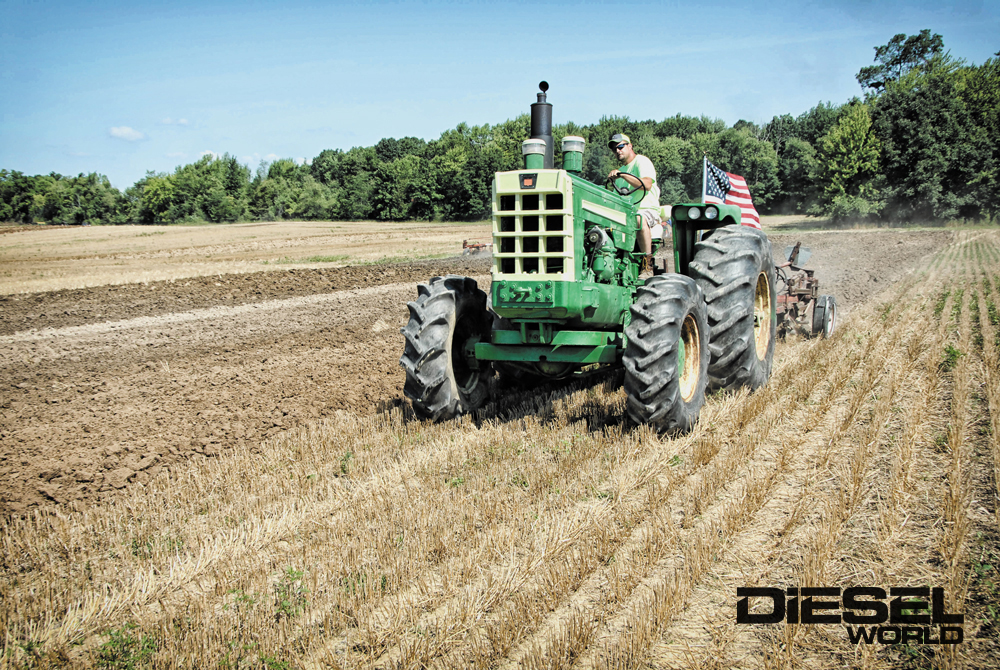 Interestingly, the 1950 rear drive and four-wheel drive tractors were tested at Nebraska at the same time. Both achieved exactly the same 105 horsepower at 2400 rpm PTO rating. For drawbar horsepower, they actually weren’t far apart, the rear-drive making a 92 horse rating with no ballast and the 4×4 at 96. With maximum ballast, the rear drive actually was higher than the 4×4 at 98 horses versus 93 but the 4×4 had less wheel slip. When you look at drawbar pull, you see the 4×4 pull ahead, delivering 17,575 pound @ 14.6 percent slip versus 12,880 pounds @ 14.73 percent. The Nebraska tests are done on a traction pad and don’t factor in low traction issues. Give the two rigs some soft ground to play in, you only get one guess who would win the contest. 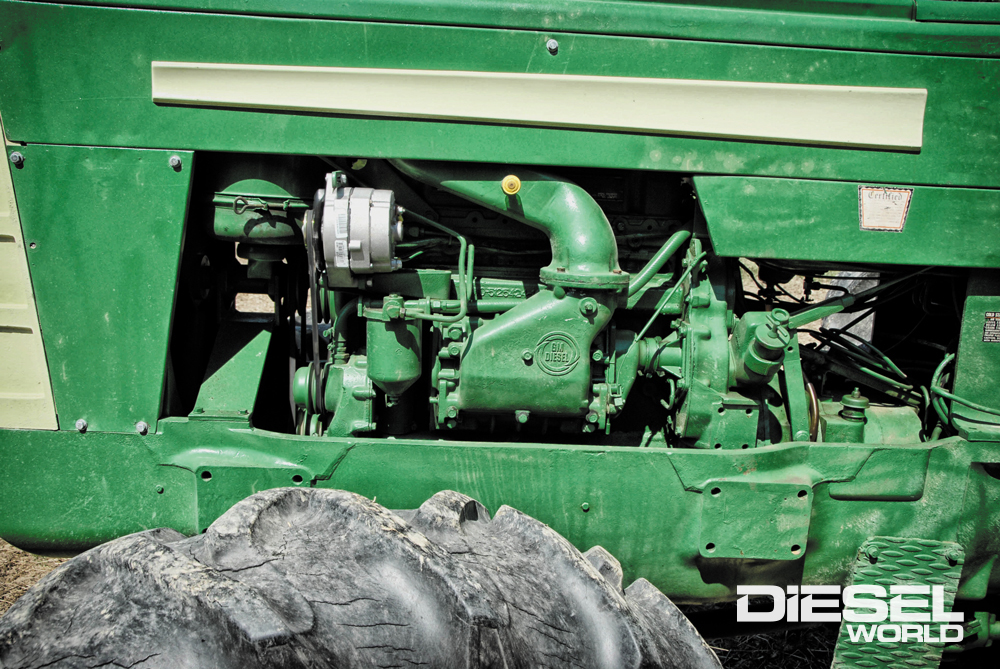 The 1950 was in production for three model years, to the tune of 36,450 units. This included all configurations and we didn’t see a breakdown of how many four-wheel drive units were built. They are relatively common today, so they must have sold reasonably well. Overall, more than 36K could be called a good run, proving the 1950 was popular. It was replaced for ‘68 by the 1950-T, which was essentially the same tractor but powered by a turbocharged Waukesha six cylinder that was certified for exactly the same power as the 4-53. The two versions coexisted for a short while. It unclear exactly why the GM engine was dropped but it probably came down to dollars and cents. The Waukesha was certainly quieter!