The heavy machinery industry is one of the largest sectors within the global economy. As every economic superpower trades with each other, the industrial and logistics companies reap the respective benefits. An excellent example is the Danish freighting company, A.P. Moller-Maersk A/S. Maersk is a global shipping and logistics company operating over 750 freight vessels with a combined total capacity of 4.1 million TEU. Below, we’ll observe four of the Maersk’s largest ships in the fleet and their propulsion systems.

In the Maersk fleet, the Manchester is easily one of the largest big-rigs. She was built in 2018 in South Korea and sails under the flag of Denmark. One may ask why the company would pick a specific flag for a ship, and the purpose so the shipping company can save costs from international fees and leverage reduced regulation at friendlier ports. Within the network of classification systems for cargo ships, Maersk tags specifically sized ships with letters and the Manchester’s identified as a “Triple-E” container ship. The mighty powerplant moving this behemoth includes the combined effort of two Sulzer RTA96-Cs. If you want to gauge the rigs’ sizes, here’s a three-minute YouTube video giving a tour around only one RTA96-C. Just imagine two!

The Wärtsilä-Sulzer RTA96-C is a magnificent two-stroked turbocharged diesel engine with an estimated power output of 80,080 kW. That roughly translates to a little over 107,000 horsepower! These monsters are currently the world’s largest reciprocating engines and feature a configuration of a two-stroke straight-14. In most average cars, the engine displacement is around two liters, for diesel tractor-trailers, fourteen liters, but for this gigantic engine, it has a displacement of 1,800 liters per cylinder. Another mind-boggling statistic of this engine is that the pistons weigh 12,000 pounds each, and the mean piston speed is about 28 feet-per-second. This movement is hard to wrap one’s head around after considering the level of inertia. The engines on the Maersk Manchester weigh just under 5,000 tons but can move the ship 25 knots. These engines take the cake for hard workers!

As 2021 kicks off, the Manchester Maersk will be traveling towards Europe, and the Marseille will be approaching the Chinese port of Tianjin Xingang. Often, large shipping companies will diversify their cargo routes to ensure necessary coverage of all regions. While she may look the same as the Manchester, the Marseille is powered by a pair of Doosan 7S80ME-C9s, producing 62,000 kW, also known as 83,000 horsepower. The Marseille also sails under the flag of Denmark, the home country of Maersk itself. Some may ask why these ships carry so many containers and why containers are the object of choice. North Carolinian Malcolm McLean was the father of containerization as he introduced the concept of using crates to improve reliability, reduce theft, and cut inventory costs by shortening the time of transit. Malcolm went on, and his freight ventures succeeded and eventually absorbed into what’s known as CSX Corporation.

As you’re looking through these mega-ships, you may be wondering what the “TEU” means. In overseas shipping and freight, a TEU is a Twenty-foot Equivalent Unit of a shipping container. The dimensions of the crate are twenty feet long, eight feet wide, and eight feet tall. For some additional reference, the crates’ lengths are roughly the same height as a typical telephone pole. More familiarly, when you see a long freight container on a train car or tractor-trailer, those usually measure out to forty feet or two TEUs. With that said, the Milan can carry nearly 20,000 twenty-foot containers, or equivalently, 10,000 forty-foot containers. For more understanding, a twenty-footer can typically fit all the belongings of a three-bedroom house. So basically, the Milan Maersk can transport the combined belongings of 20,000 three-bedroom homes! If you’ve ever moved where you live, you’d understand how much time and how many things that would include. The next time your drive down the interstate and you see a crate, use this key to understand where the container is going and what might be inside! 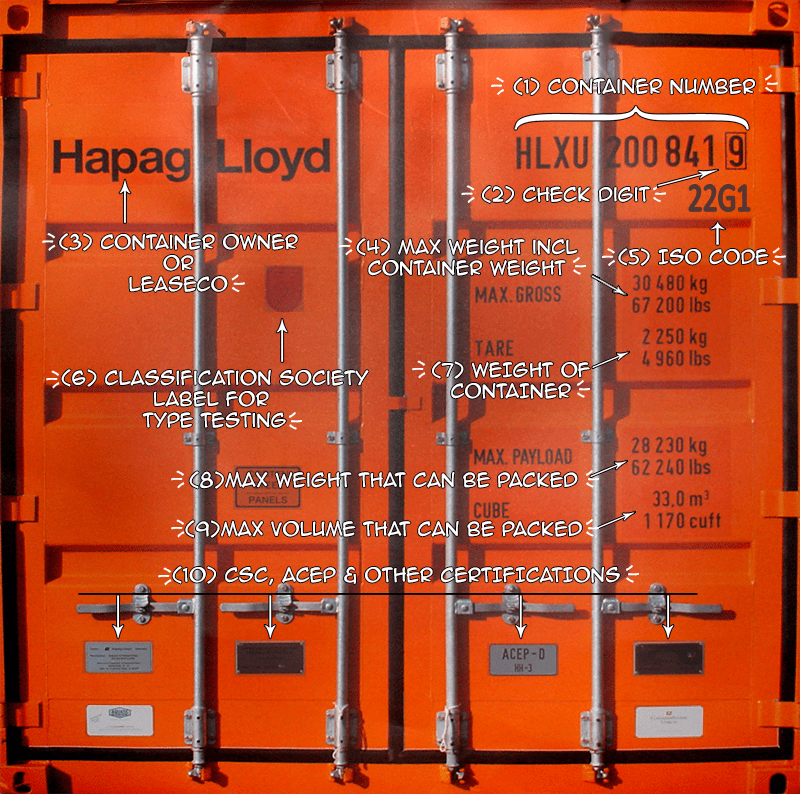 Now that you know how to read containers, here’s a bit more info on the Milan. The Milan Maersk is another rig built by South Korean Daewoo Shipbuilding & Marine Engineering. She uses the same engine setup as the Manchester but has the callsign OGWK2. Just like the tracking websites for FedEx, UPS, and Amazon, there’s a boatload (no pun intended) of websites that offer companies to track their shipments in real-time. Most of the companies utilizing containerized shipping are larger in capitalization, and therefore the change of arrival times can mean differences of thousands of dollars. The system is very well structured but can become dicey with international travel. For example, Iran has had a few run-ins with Maersk and has seized multiple ships over time due to foreign conflicts. As a result of these situations, Maersk eventually cut ties with Iran. However, the first day of 2021 kicked off with a bang, as another South Korean tanker ship ending up seized by the Iranian military after complaints of the tanker allegedly polluting the Persian Gulf waters. Iran has nearly $7 billion of frozen assets in South Korea due to US-imposed sanctions, a much more likely reason for the seizure.

The Moscow Maersk is a diesel rig with twin MAN B&W 7G80ME-C9.5-TII engines producing a total of 84,296 horsepower. These gigantic diesel engines often feature components made from various companies, as the Moscow also has GE shaft generators, Nakashima Propeller Co propellers, and Alfa Laval boilers. The hull is made from high-strength steel and is capable of cutting rough waters as necessary. In terms of the actual metals used, most container ship hulls are composed of weathering steel known as COR-TEN steel. Its name comes from its corrosion resistance and its improved tensile strength. The primary elements used to generate the steel include carbon, silicon, manganese, phosphorus, sulfur, chromium, copper, vanadium, and nickel. The COR-TEN metal was designated as ATSM 242 by the American Society for Testing and Materials. Type 1 A242 alloy is for housing structures, construction materials, and freight cars. On the other hand, Type 2 A242 alloy, also called Corten B, is used for urban furnishing, passenger ships, and construction cranes. By having a strong hull, these ships can continue transporting goods and reduce the time for repurposing once the hull becomes overweathered.