The Nissan SD and a 1968 Chrysler New Yorker

The 1973 oil embargo scared Uncle Sam right out of his red-and-white striped pants. With a new focus on fuel economy, the American auto industry began studying diesel engines. They were a new concept for the auto and light-truck side of the industry, but not for the medium- and heavy-truck side, where diesel power was everyday business. There were no light-duty diesel engines manufactured in the U.S. suited for powering cars or 4×4 trucks, so American firms had to look to foreign manufactures for ideas. One line of suitable Japanese engines sold here at the time was the Nissan SD series.

The Nissan Diesel Motor Company started in 1959, when Nissan acquired Minsei Diesel Industries. Minsei began in 1950 as a branch of another company and debuted a 2-stroke Uniflow truck diesel in 1955. In 1969, Chrysler and Nissan created a joint venture to market Nissan diesel engines in North America, with a primary focus on the marine and industrial markets. The engines would be badged Chrysler-Nissan. Chrysler was heavily invested in marine engines at that point but wasn’t averse to selling automotive diesels. In fact, they were among the first to test SD series engines in their own lines of cars and trucks, though none of those tests evolved into a production model. Additionally, a small cottage industry evolved doing conversions using the Nissan SD.

The Nissan SD series engines debuted in 1963 with a 2.0L four-cylinder (the SD20) and evolved from there, with a larger four- and a six-cylinder derived from the original design. At the same time, a 264ci, 128-hp V8 was developed but wasn’t produced. The SD line continued until 1987, when Nissan developed the LD series. The SD engines were indirect-injected and naturally aspirated for the most part. Some of the last engines were turbocharged for a modest increase in power. 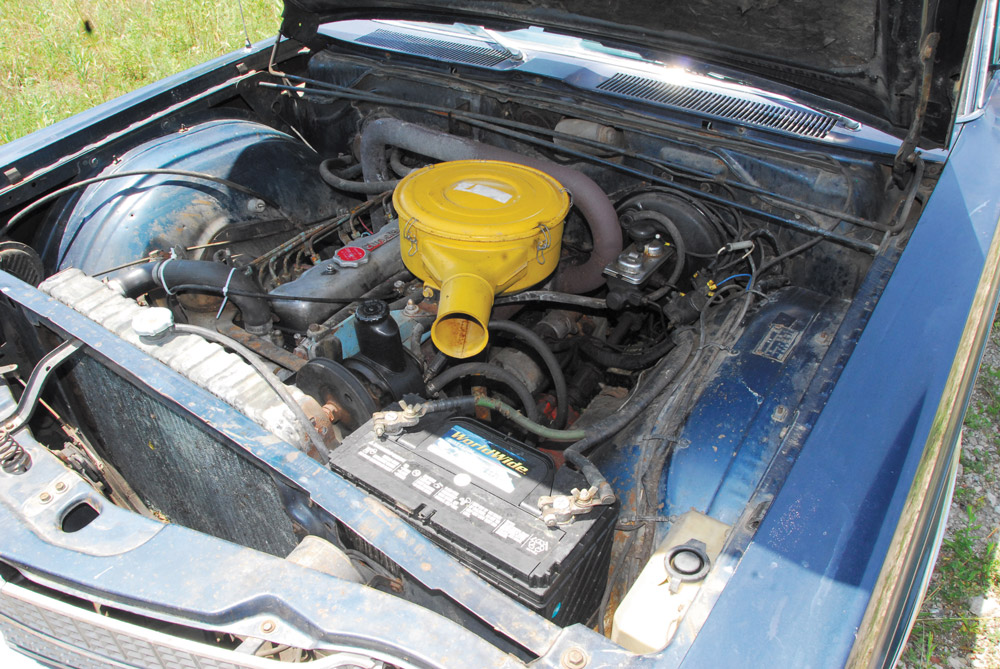 Starting in 1973, International Harvester began looking at a diesel powerplants for the Scout II. They found several manufacturers interested in selling engines and willing to do test swaps into Scouts, including Mitsubishi, Peugeot, Chrysler-Nissan, and Perkins. Installations of each were evaluated in 1973 and 1974, and the Chrysler-Nissan CN633, known by Nissan as the SD33, wound up at the top of the heap.

A series of installations into test mules began in preparation of a planned introduction for the 1976 model year, with the last taking place in September of 1975 in ’76 model-year chassis. The first production Nissan-powered Scouts were built in October of 1975, but not many were built until January of 1976, when big numbers began rolling off the line. These engines were successful in Scouts and gave IH the nod for offering the first American-built, diesel-powered production SUV. You can read more about the IH Scout diesel in a 2016 DW story online at https://www.dieselworldmag.com/features/diesel-history-retrospective-diesel-scouting-the-story-of-ihs-diesel-powered-scout.

So, what does all this have to do with the diesel-powered lead sled pictured nearby? No, it’s not original, but it was done a long time ago by a family of farmers who preferred diesels to gassers and spent their winter months fixing up cars and trucks for resale. It all started in the 1940s, when Alan Shaeffer of Portland, Indiana, got bitten by the diesel bug. His son, Mike, said Alan’s first conversions were done around 1947. One of the most notable early conversions was a 1953 Packard into which Alan stuffed an Oliver-Waukesha Lanova diesel from an Oliver tractor. Over the years, Alan and his sons, Mike and Tim, converted any number of cars to diesel power, and that leads up to the 1970s and their fixation with Chryslers.

Mike says the first Chrysler re-powered with a Nissan SD33 was a 1974 Town & Country wagon. It was bought as a wrecked nearly new car with a bent chassis that the Shaeffers put back together. After that, several others had a “V8-ectomy,” including a ’70 Imperial, a ’73 Newport, and a Consort Blue ’68 New Yorker. Some of these stayed with the family and others were converted for clients.

Mike related a story about the ’74 Town & Country that connect the Shaeffers to International. Alan was up at the IH factory not long after the conversion and happened to meet up with a group of engineers outside on a break. They couldn’t help but hear the rattle and asked about what was under the hood. When they saw it was a Nissan, Alan noticed a lot of excitement that could be interpreted as “knowing smiles.” Most likely the Nissans were already undergoing tests at IH and maybe had already been selected for the Scout.

The Shaeffers developed connections with International and when the testing was done on the various installations, they sold the test rigs. Guess who was first in line to get most of them? You guessed it—Alan Shaeffer. They mounted engines from Nissan, Mitsubishi, Peugeot, and Perkins. A few of them were used or sold intact, while others donated their engines to other projects. Two of the them are known to have survived and one will soon be on the IH show circuit.

The New Yorker was done later by Tim Shaffer in the early 1980s using the engine from the Newport conversion from some years before. That conversion had been done for a customer who used it for a few years before selling the car back to the Shaeffers. It was used on a rural postal route until the car rusted away from the engine. The New Yorker resumed postal duties for a while but made the rounds of several of the Shaeffer clan before falling into disuse. Enter John Glancy.

Glancy owns Super Scout Specialists and Scout Light Line, two places with which anyone in the Scout or IH light truck world is well familiar. Besides being an expert on all things International, he has a collection of IH vehicles that will make your head spin. Something about this car piqued his fancy. Glancy purchased much of the material left over from Alan’s decades of conversions, including a number of engines known to have been in test Scouts. People are now working on connecting those engines to particular Scouts.