The early 1960s marked the beginning of the large scale application of turbocharging to diesels in the tractor world. Massey-Ferguson’s (MF) first big turbo diesel tractor was the 1965 1130 and it gave them a big, powerful six-cylinder tractor for market parity with the other players.

The high-platform 1100 series tractors debuted in 1964 as Massey-Ferguson’s first in-house-built big tractor. After the Massey-Harris to Massey-Ferguson transformation in 1953, the bigger Massey-Harris tractors were quickly phased out. Long term plans for a new line of big tractors were enabled but in the short term, MF was left without big tractors in the lineup… and that hurt. By 1958, they had resorted to badge engineering, buying repainted and rebadged Minneapolis Moline GBI and GVI units, calling them the Massey-Ferguson 95. The MF-95 was replaced by the MF97 in 1962, which was a M-M 706 with red paint and MF badging (see DW June 2018). That carried them until the work was done on the new line.

The 1100 was an all-new, high platform design, very up-to-date, and featured a 94 horsepower, 354 cubic inch, direct-injected Perkins six. It was a big tractor, weighing in at 11,000 pounds. Later in the year, the 1100 was joined by the 1130, which was basically a turbocharged version of the same tractor that developed 120 PTO horsepower in a 1966 Nebraska tractor test. That put them well up the food chain in the new tractor horsepower race. In 1970, MF upped the ante again with the 1150, which used a 135 PTO hp, 540 cubic inch Perkins V8 installation into the 1100 platform… but that’s another story. 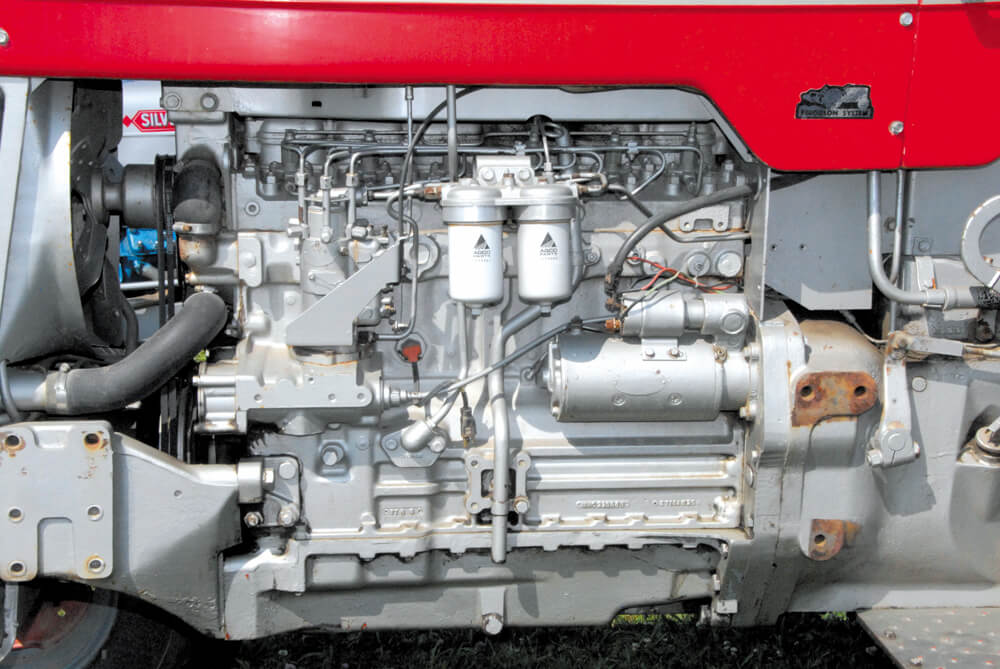 The 1100 series came as standard Rowcrops or as Westerns, the latter having a nonadjustable width front axle, wider standard tires, chaff guards, rounded fenders and (generally) only a swinging drawbar and no 3-point hitch. MF offered a cab with AC and heat, and the 1100 line came standard with power steering and brakes. A 6-speed mechanical gearbox was standard, but the 12-speed Multi-Power was an option, essentially offering a shift-on-the go splitter for all six main gears. MFWD was an available option soon after the 1100 series went into production.

The 1100 was offered with both a 320 cubic inch gas/LPG engine (starting in ‘66- it was introduced with only a diesel) or the naturally aspirated Perkins 6.354. The 1130 was only offered with the turbocharged 6T.354 (A.K.A. 6.354T). You hear the name “Perkins” a lot when dealing with MF because they had owned Perkins since 1959. It was a “fire sale” kinda deal, where Perkins was struggling with losses partly due to the intro of a problematic diesel in 1953. That R6 engine had some teething issues that were solved quickly but, as these things tend to go, the mistake cut deeply into the Perkins reputation and afflicted sales. Overall, it turned out MF and Perkins were a good match and both companies are still with us today.