The 1970s would bring about one of John Deere’s biggest model line updates, the Generation II tractors. The previous New Generation tractors had brought John Deere (JD) to the top of the tractor sales heap in 1960, beating the behemoth International Harvester for the first time. The JD 10 series tractors had taken the tractor world by storm and the more refined 20 series that debuted in 1964 were no less a hallmark. The 10 and 20 Series tractors served Deere, and the tractor buying public, very well until the 30 Series came along for 1972.

What became known as the Generation II tractors were far more than just a refresh. While they took many of the successful core design features of the existing Deere Line, they added the most modern technology and a new focus on comfort and convenience while addressing many of the new directions farming was taking in the ‘70s. The product of this new line were called the 30 series and probably the most notable feature of the line were the available Sound-Gard cabs. The sheet metal lines were updated from top to bottom and almost every component had some level of improvement, from the smallest to the largest tractors. In this Tractor Talk we’ll talk about one of the smaller tractors, the 2630.

By the ‘70s, John Deere had expanded it’s worldwide footprint and was building an ever increasing number of tractors overseas, some just to serve those overseas markets, and some for export back to the home country. A line of utility tractors became known as the Worldwide Tractors and there were a total of 77 models built in this category from 1972 to about 1982. During that time, Deere operated plants in Argentina, Australia, Germany, Mexico and Spain. Most of the Worldwide Tractors were in the small to medium range utility category most suitable for markets outside the U.S. but there was still a big market for similar units here. 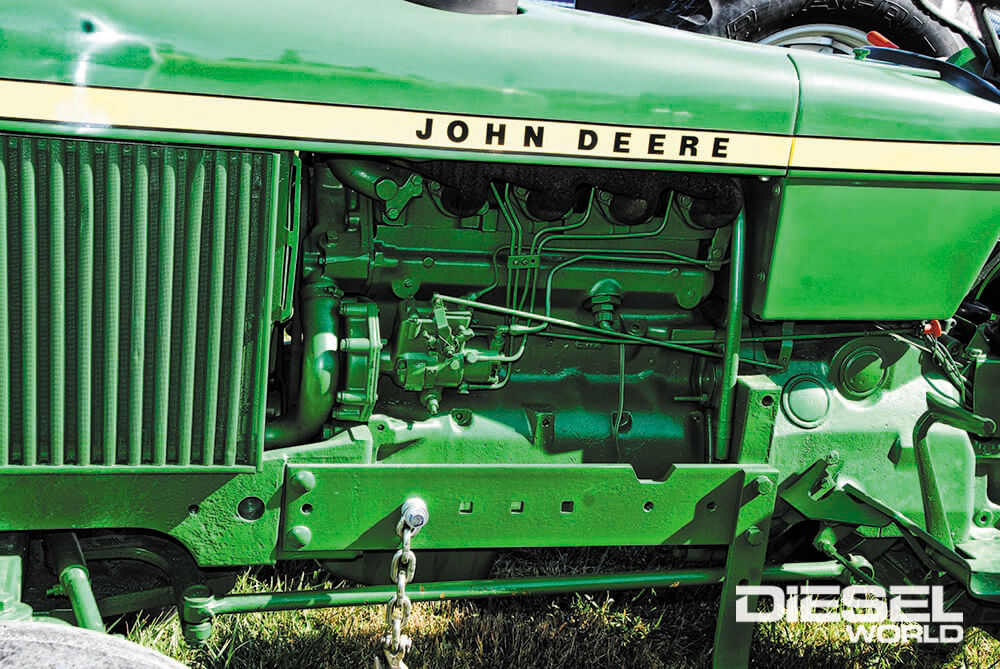 The 2630, which debuted in 1974, was built in the Dubuque, Iowa, Deere plant so may or may not be considered a “Worldwide,” but in design and concept it was in the same category. The Dubuque Works, which opened in 1945, had evolved into Deere’s primary industrial equipment plant and grew to be their main plant and engineering center.

Rated at Nebraska at 70 PTO horses, the 2630 was a four-cylinder utility that was adaptable to many uses. It had a similar counterpart built in Germany that is sometimes seen here. A small farmer could use the 2630 as a primary tractor… but there weren’t many of those left when the 2630 debuted. Many were operated as loader tractors and a good number of those you see working today are so-equipped.

The 2630 was only offered in ‘74 and ‘75 and came only as a utility. The track was adjustable so that it could be used as a row-crop tractor but that was a fading requirement by then. The main options centered around the gearbox. The 2630A had a standard 8-speed (4×2) with two levers, one that combined a Park position with high and low range, with a forwards-and-back shuttle position (clutch required). This was a great standard feature in a utility. Optionally, the 2603B had a clutch-less Power Shift with a lever on the dash opposite the throttle. The 2630F had a clutch-less shuttle gear with a lever on the dash… in the same spot as the Power Shift lever so you couldn’t have both. There were two 540 RPM PTOs available, a continuous PTO with a mechanical lever on the final drive case and a Live PTO with a lever between the gear shifters. A ROPs with or without a canopy was optional. Power steering, a 3-point hitch, and one set of hydraulic remotes were standard.

The 2630 evolved into the almost-the-same 2640 that came with the intro of the 40 Series in 1976. With such a short production period, it’s a tractor that’s often forgotten but owners will tell you it’s certainly not a forgettable tractor.