Exploring the Multiple Uses of a Chassis Dyno

Even if you’re new to the diesel game, you’ve probably heard of a chassis dyno. In its most common form, a dyno consists of a roller (or rollers) that measures how fast your vehicle can accelerate, then uses weight (or load) to calculate its horsepower and torque. Chassis dynos have been known to measure up to 2,500 horsepower and can handle wheel speeds of 200-250 mph! Now that we’ve told you all of this, we’re here to tell you that is just scratching the surface of what chassis dynos can do. In addition to measuring horsepower, chassis dynos can also be used for tuning purposes, can learn transmission shifting, may be used for emissions purposes or fuel economy testing, and more. For the purposes of this article, Haller’s Repair in Cheyenne, Wyoming, was nice enough to let us use their dyno, and one of their customers, Joe Webber, provided a mildy tuned ’16 Ford that we could play with.

Dynos are pretty simple, and there are only a few different types. There are inertia dynos, which rely on the weight of the roller to simulate load, and load cell dynos, which use a water-cooled brake to put a known load on the engine. There are also different ways to make power. Some dynos rely on dual rollers, some on single rollers, and some have load cell pods that affix directly to the rear axles (or in industrial cases, a tractor’s PTO). For most diesel trucks, any type of dyno is suitable. However, as horsepower approaches 1,000 rwhp, careful care must be taken to strap the vehicle down to prevent the tires from spinning on the rollers. Other than expensive hub dynos, a large single roller is best for traction, followed by a small single roller, followed by dual rollers. We’ve seen 1,500+ rwhp on virtually every type of dyno there is, which goes to show that virtually anything will work. For our tests, we’d be using a small single-roller Dynojet 224XLC, which uses a load cell so we could vary the load and amount of time elapsed (called the sweep) on the dyno run.

Perhaps the most basic and informative use of a dyno is to measure horsepower and torque, which is good for everything from predicting performance to pure bragging rights. On Haller’s 224X we tried everything from inertia sweeps to 40-percent load (that’s a lot), and found that even on a 500-ish horsepower truck power did increase as more load was applied. Load also boosted the torque number by a good margin, even with the same tune-up. Horsepower ranged from 489 to a whopping 527 based on load. Not a world of difference, but noticeable. We also tried a steady-state test, where we increased the load until we saw an EGT number we wanted (in this case 1,000 degrees in fifth gear) to see what kind of power and torque the truck could make while towing. At 1,000 degrees and 2,000 rpm the truck made a mere 203 rwhp but an immense 524 lb-ft of torque—and keep in mind it can basically do it forever. 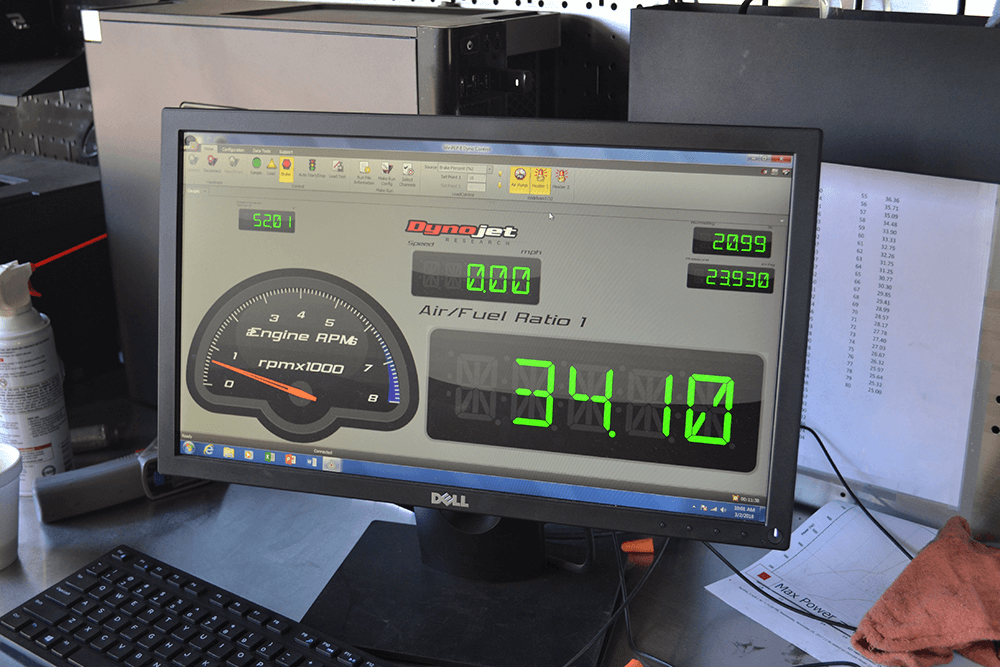 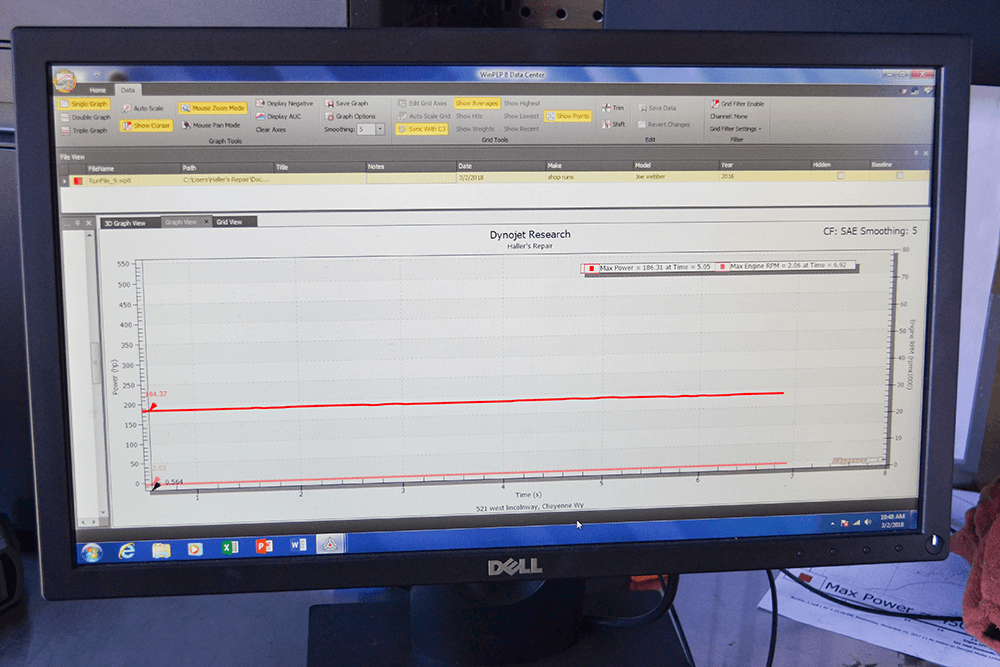 While measuring horsepower is perhaps the most common use for a dyno, some of the best usage comes from the precision information one can gather from computer tuning while a truck is on the dyno. One of the craziest examples that springs to mind is an ’06 common-rail Cummins that had a built transmission and a “killer” tune on the engine. And it made… 298 rwhp. Yep, less than stock. One actual hot tune later, it made 501 rwhp with no other changes. While this is an extreme example, Haller noted that it’s easy to pick up 30-40 horsepower through dyno tuning.

“There’s usually some power left somewhere, and a dyno is just about the easiest way to find it,” he notes. “You can also monitor things like rail pressure and push a tune right to the limit where it starts to drop. It’s something you could do on the dragstrip or a lonely stretch of road, but here on the dyno you can usually accomplish in minutes what would otherwise take hours.” And although none of us likes to think about breakage, having a truck break at a shop with tools present is usually a lot more convenient than out on the highway somewhere.

“Learning transmissions is one of the best uses for a dyno,” Haller says. On newer trucks, when a tune is changed, the transmission has to re-adapt its shift strategy to compensate for added power. If this isn’t done, serious transmission damage such as burnt clutches or broken shafts can occur. Most people recommend doing 10-20 quarter-throttle pulls through the gears, then 10-20 at half throttle, and so on until full-throttle shifts are crisp and firm. This is another activity that’s almost always easier on a dyno, because who wants to go quarter throttle down a dragstrip? “Since the dyno measures actual horsepower, you can also see how much power you’re losing to defueling or non-lockup, whether the transmission is slipping or not, and a variety of other factors,” Haller says.

It’s a common reaction for diesel enthusiasts to run for the hills when they hear the word “emissions,” but like it or not it’s a fact of life on newer trucks. While Wyoming’s emissions regulations are fairly lax, many choose to keep their trucks mostly stock due to warranty concerns. For these folks a dyno can be a real help in dealing with issues. “Our shop truck is just a factory Ford, but the truck never gets driven far enough for the DPF to go into regen, so it’ll get clogged up,” Haller says. Since going to lunch 30 miles away isn’t always an option, they can perform a regen on the dyno by putting a slight load on the rollers with the truck on cruise control. “It’s not a perfect solution, but if it’s snowing bad or hailing sometimes that’s all we have,” says Haller. 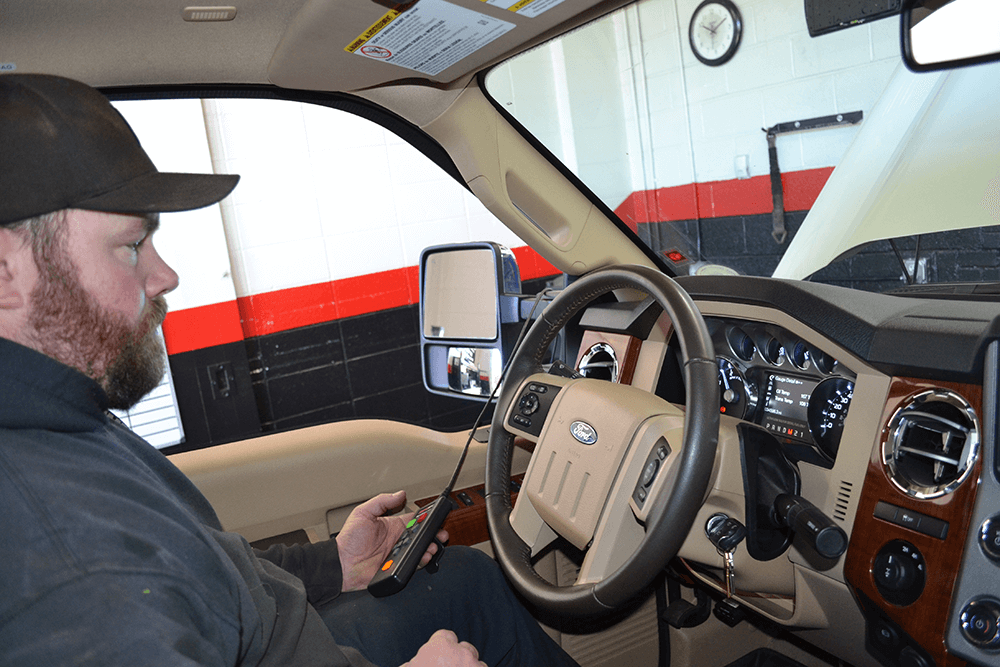 “Hey, is that an air/fuel ratio monitor? Ever use it on diesels?” we asked. The answer was yes, it was, and no, they hadn’t, so we decided to give it a shot to see what we could learn. As it turned out, that was quite a lot. First off, diesels run way lean at idle, to the tune of more than 30:1, which lends credence to the theory that an idling diesel barely uses any fuel. We’d always heard that 22:1 was a rough smoke threshold, so we decided to test that too, and were surprised to see a stock 6.4L Ford went down to 20:1 during normal operation, and 18:1 during regen! Our 500-rwhp test truck was also pretty lean at 19:1, which goes to show you don’t need smoke to make power. Finally, we performed a stock versus modified towing load simulation and found that the modified truck could run about 30 percent leaner at 27:1, which means better fuel economy.

Do You Need a Dyno?

If you’re a private enthusiast on limited funds or even if you run a small shop, chances are you probably don’t need a chassis dyno. If you’re a large shop, especially one that does tuning, it might be a good investment considering the amount of information you can learn. Also, the resale on dynos (good ones range in price from $25,000 to $60,000) is pretty good. Whether you’re looking at buying a dyno or just testing on one, remember, there’s a lot more to them than just measuring horsepower! 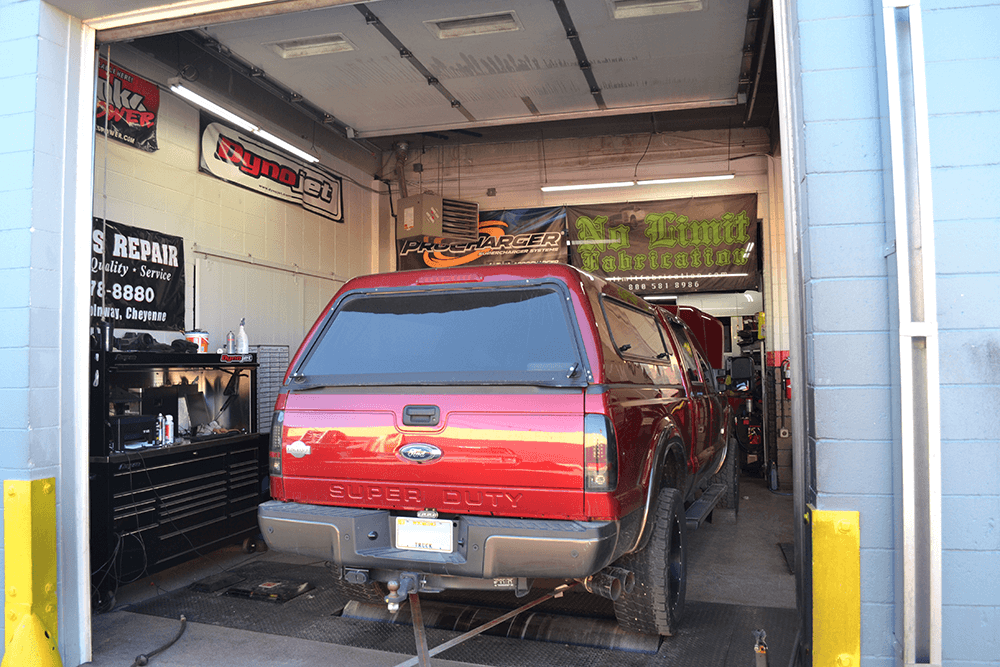 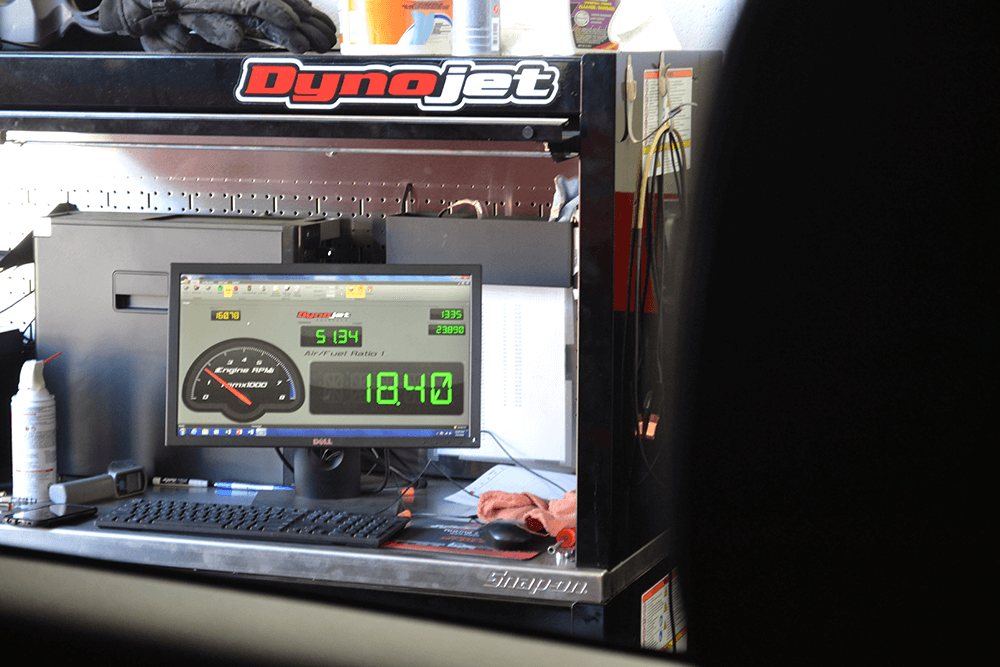 Engines (even diesels) will usually make less power at high altitudes due to the simple fact that there’s less oxygen to compress in the thin air. Dyno manufacturers know this, so they’ve developed a “correction factor” that takes the high-altitude number and adjusts it to what it “should make” at sea level. Correction factors were unfortunately developed for gas rigs, which means that heavily boosted engines may read a bit high with the corrected numbers. However, non-corrected numbers at altitude are usually a bit low. We’ve seen people argue about correction factors until they’re blue in the face (we’ve done it too), but the reality is that the truth usually lies somewhere in the middle. Diesel World editor Adam Blattenberg dynoed his 7.3L up in Salt Lake, where he made 486 rwhp uncorrected and 526 rwhp corrected. At sea level a few weeks later, the Ford cranked out 519 rwhp uncorrected, so the power readout was different, and slightly skewed toward corrected numbers.