UNDERSTANDING THE NUMBERS BEHIND COMPRESSION IGNITION

Diesel guys are numbers guys whether they know it or not. You’ll see the big three touting numbers in all of their ad campaigns—best-in-class towing, most torque, and highest horsepower. In a day of small-turbo economy cars, diesel numbers are almost always big. For many aftermarket enthusiasts, 500 rear-wheel horsepower and 1,000 lb-ft of torque are sort of the starting performance benchmarks. Whether you’re good at math or not, numbers infiltrate virtually every aspect of the diesel market—so let’s have a look at them! We promise to try and keep it basic.

Almost all diesel engines worked on in the performance industry are large, but if there’s a displacement you can’t place (or if you’re talking to an old hot rod guy) you can mix liters and cubic inches by taking the size in cubic centimeters (5.9L for instance = 5,900cc) and dividing it by 16.38. This gives us 360.2 cubic inches. That means an 8.3L (8,300cc) is 506 cid, and a 1.9L TDI is a tiny 116 cubic inches. It might not be exact, but comparing cubic inches to cubic centimeters can be helpful in everything from calculating airflow to sizing turbos, considering most American hot rod calculations are non-metric. 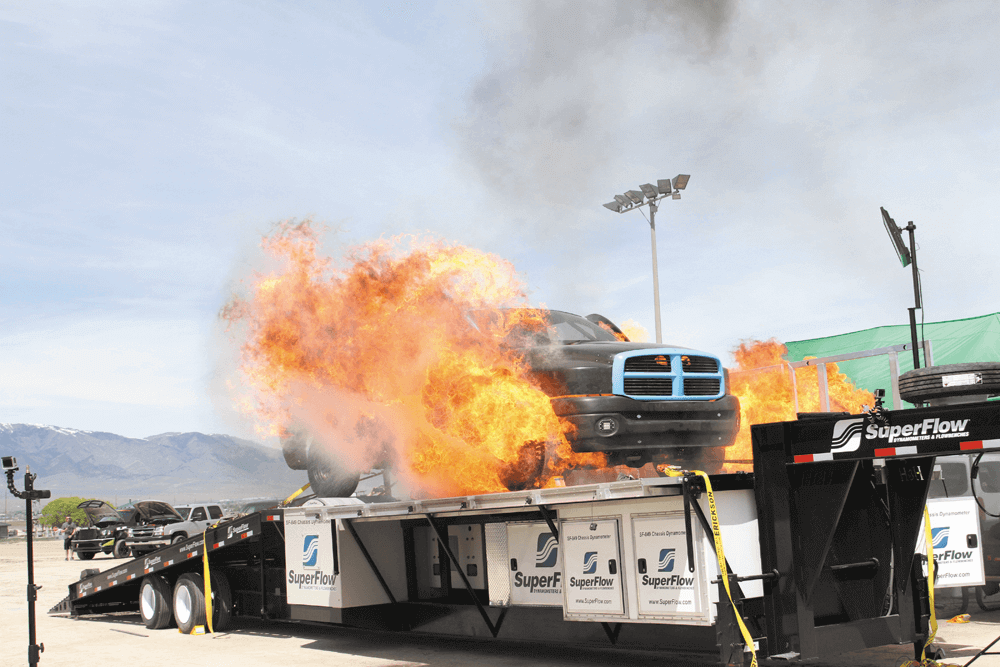 Another handy notation to have includes airflow, which is simply cubic inches multiplied by rpm and divided by 3,456. That means a 360 cid engine (can you tell we like Cummins?) spinning at 3,000 rpm would consume about (360 x 3,000 / 3,456) 312 cfm of air when operating at 100-percent volumetric efficiency. However, volumetric efficiency is typically far from 100 percent; it’s often closer to 80 percent. So that means we now get an answer of (312 x 0.8) 249.6—let’s just say 250—cfm of air. The great thing is, with these simple formulas you don’t even have to be scholarly at math. You just plug-in a couple of numbers and there’s your answer. If you’re wondering what airflow has to do with anything, we’re getting to that.

We get the question all the time: How do you size turbochargers? In reality, the answer is simple. Turbos should be sized as small as possible for your desired horsepower. Luckily, airflow is one of those rare areas where the stars align, as roughly one pound per minute (lb/min) of air is equal to about 8 rear-wheel horsepower on a good-running engine. That means a turbo that can flow 50 lb/min (we’re talking stock-ish here) would be good to about 400 rwhp. For those looking to be right at 1,000 rwhp an S480 is a popular choice, which at 120 lb/min (120 x 8 = 960 rwhp) we can see why. Note that it’s also popular to make more power than the number the formula yields, but it’s usually at the risk of overspeeding the turbo.

Engine airflow math is fairly simple (with some exceptions, such as intercooling), but fueling is a harder one to crack. A multitude of variables come into play including injection pressure, timing, duration, nozzle size and so on. One thing we can calculate pretty easily, though, is the needs of a lift pump. Starting with a factory example, let’s take a truck that has a turbo that flows 50 lb/min of air and calculate the fuel it needs to support that power level. Most factory engines run at around a 20:1 air/fuel ratio (or even higher) to keep smoke to a minimum, so we can see that at that airflow level we’d need (50 / 20) 2.5 lb/min or 0.36 gal/min (diesel is around 6.93 pounds in weight), or (0.36 x 60) 21.6 gph. Not very much. However, just enriching the air/fuel ratio to 14:1 increases that need to 30.9 gph. On a big-horsepower mechanical truck (let’s say 120 lb/min turbo, and 12:1 air/fuel ratio) we can see the need goes all the way up to 86 gallons per hour.

Now, you may be wondering why there are 100 and 150 gph pumps out there if there’s only a need for 86 gph, even on a hot engine. The answer has to do with pressure. As pressure goes up, flow decreases, as the pump has a harder and harder time pushing fuel to the engine. A pump that free-flows 150 gph might only flow 120 at 20 psi, 100 at 40 psi and 80 at 60 psi. Some pumps aren’t even made to run at those types of pressures, and might not get there at all. Also, the instant need for fuel once the pedal is mashed means that most people go with overkill so there’s no pressure drop when the engine suddenly demands fuel.

Nitrous oxide can be great fun on a diesel, or it can lead to a lot of headaches, depending on how it’s used. The most common misconception about nitrous is that a certain size jet equals a certain size “shot.” While this is true on gas engines (a 0.062 jet for instance, is a 150hp shot), on diesels it works differently. Since diesels operate over a wide range of air/fuel ratios, more air doesn’t always mean more power. In a lightly fueled truck, an 0.080 jet might equal 50 horsepower; in a heavily fueled truck, the same 0.080 jet might be worth 200 hp. Also, since nitrous flow is based upon the area of a jet (3.14 x radius2), a 0.100 jet is not twice the size of a 0.050 jet—it’s four times larger. Diesels are also capable of huge amounts of nitrous ingestion, even with the turbo. Two or three 0.125 jets on a diesel can be worth 500 hp or more.

It’s hard to fit everything about transmissions, axles, and tires into one category, but one must remember that they’re all interrelated. Change the gear ratio? The overall speed versus rpm of the vehicle changes. It’s the same with transmissions and tire sizes. We’ll start with the easiest calculation, estimated speed versus rpm. Let’s say that our test vehicle is an ’01 GMC with a five-speed transmission, 3.73 gears and 32-inch-tall tires. In fifth gear, the engine is overdriven via a 0.71 gear ratio, which means the effective final gear ratio is (3.73 x 0.71) 2.65. To figure out speed at, say, 2,000 rpm, our equation is mph = (rpm x tire diameter) / (gear ratio x 336). The number 336 is just a constant that gives you a correct result. So, our speed is (2,000 x 32) / (2.65 x 336) = 71.8 mph. This formula is probably the most useful in determining tire size changes, as we can see switching to 35s would give us a big speed increase to (2,000 x 35) / (2.65 x 336) = 78.6 mph. Just like the other formulas, it’s not 100-percent accurate due to slippage, tire deflection or other unknown variables, but usually it’s darn close.

In closing, breaking out the calculator can help you plan the next move for your truck, calculate power, or just help you daydream. As useful (and accurate) as most of these formulas are, there are still “freak” vehicles that can break the mold and run quicker or make more power than physics should allow. So take all of these formulas with a grain of salt, and remember that math isn’t always scary—it’s helpful!