Henry Ford would take a second helping of milestone pie in 1927 when his company introduced the Model A for 1928. The new car was designed by Henry’s son, Edsel, and like its predecessor, the Model T, it would go on to legendary status. In the three plus years of production (late ’27 through most of ’31), 4,849,340 Model As were made worldwide. At the end, there were some 16 different body styles, each with a number of variations.

“When Cirius Noble went looking for a classic truck a few years back, he came across a 1929 Model A Model 82-A Closed Cab Pickup that tickled his fancy. It had been restored, not perfectly, but well enough to be a fun Sunday driver that he wouldn’t have to be paranoid about driving often.” 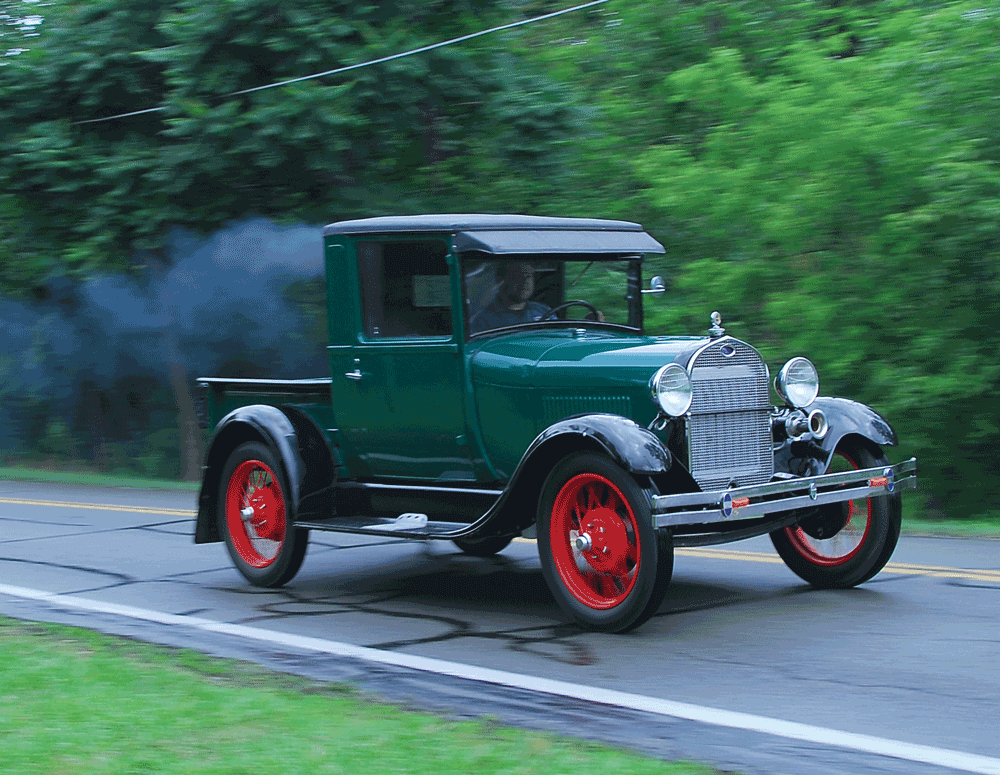 The original Model A had a lot of optional features, both OEM and aftermarket, but diesel power was not among them. Henry Ford had fooled around with alcohol and distillate (kerosene) fueled engines early on, but diesel technology was in its infancy in the ’20s and compact diesels nonexistent. How a certain 1929 Model A Closed Cab Pickup acquired diesel is what this story is all about.

When Cirius Noble went looking for a classic truck a few years back, he came across a 1929 Model A Model 82-A Closed Cab Pickup that tickled his fancy. It had been restored, not perfectly, but well enough to be a fun Sunday driver that he wouldn’t have to be paranoid about driving often. Soon after purchase, problems ensued with the engine. Some like to tout the “simplicity” of old vehicles but when the tools and expertise to fix them are in short supply, they can become surprisingly complex. In the case of this ’29, the engine block had major damage that had been improperly repaired previously. There was no fixing it the second time around.

Noble then began pondering the classic car conundrum. Do you jump through a lot of expensive hoops to keep it perfectly original or go the modern route? In this case, he did what many good diesel repair shop owners would do and swapped in a diesel. Noble wanted to retain most of the Model A flavor. He didn’t want a hot rod and that led him in the direction of a compact small diesel. Compact diesels that would fit into the Model A chassis without a lot of adaptation and other modifications made a short list. In the end, it came down to running across a tired ’86 Jeep Cherokee diesel and robbing it of the 2.1L, four-cylinder Renault turbo diesel.

The Renault J8S-814 diesel is very compact and with a wet-sleeved aluminum block, it weighs about two-thirds of the 40-hp, 200-cid Model A flathead. It makes 85 hp at 3,750 rpm with 7-8 psi boost and, in Cherokees, it could deliver low to mid 30 mpg fuel economy. In the very light (2,265 lbs) pickup, it could likely do better. The Renault diesel was once used to power a motorhome, the Winnebago LeSharo, and, in Cherokees, acceleration performance was on par with the standard gas four and the optional 2.8L V-6.

It’s interesting to compare the original gas four and the Renault diesel. There’s a big difference in displacement (126 cid vs. 200.5). Oddly, the Renault’s peak torque spec, 132 lb/ft at 2,750 rpm, only slightly overcomes the Ford’s 128 lb/ft. The old flathead, however, had a much narrower rpm band, with peak torque coming in at only 1,000 rpm and peak power at 2,200 rpm. The result is that the little diesel is not much stronger off the line but offers a lot better higher speed operation. 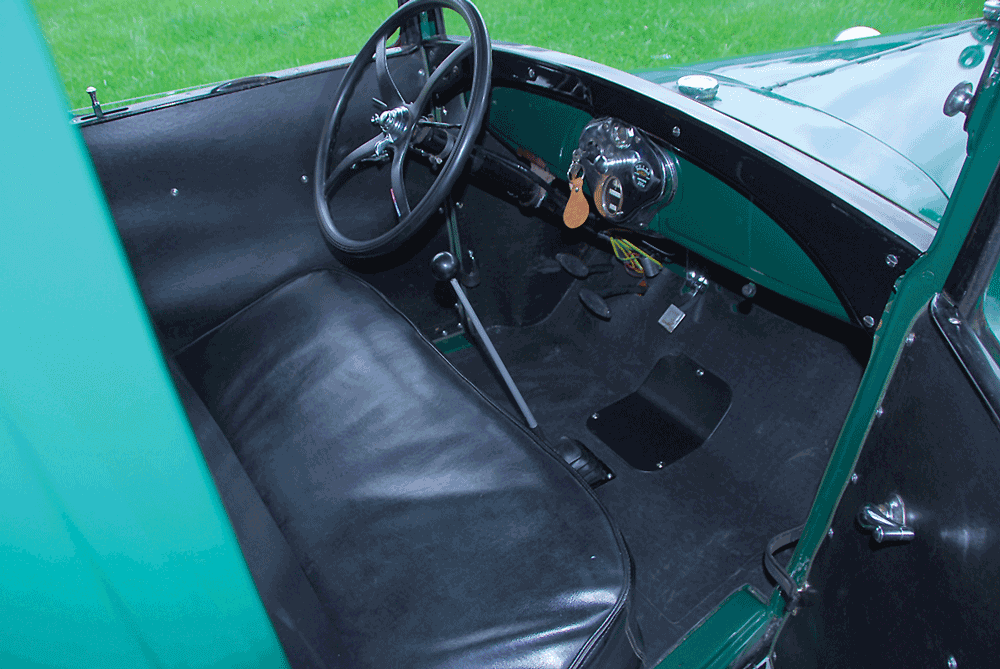 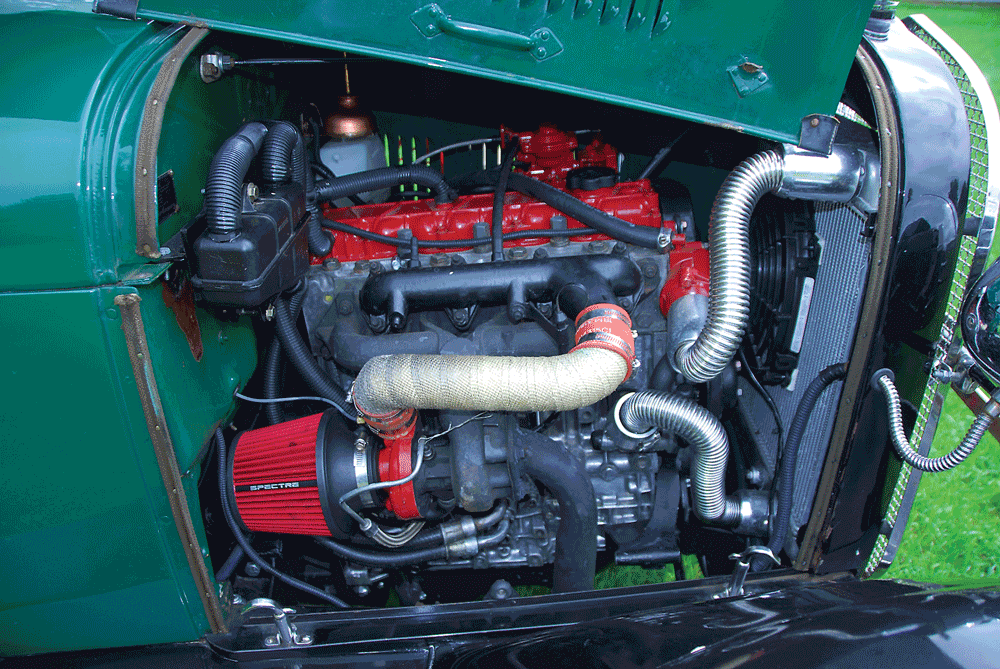 The donor 2.1L was mated to a Warner AX5 transmission, but it was a 4×4 unit. The diesel had a special bellhousing so Noble and his shop crew found a 4×2 AX-5 and mixed and matched a 4×2 transmission to fit it. The original Model A used a closed-tube driveshaft that coupled the rear axle directly to the transmission. Noble built a new open driveshaft setup using the front shaft from the Jeep and a custom-built adaptor on the Ford axle.

Beyond what was necessary for the conversion, the rest of the Model A was left original. Noble added a few improvements to the mechanical brakes, a 12-volt electrical conversion, gauges appropriate to the new engine, stereo and a few other minor changes. The diesel is a powerhouse compared to the old flathead but it’s not too much. The 85-hp Renault could probably allow you to overdrive the ’20s era steering, suspension, 4.50×21 tires and mechanical brakes, but you aren’t really tempted to do so. You’re happy and comfortable staying within the 60 mph top speed range and fuel economy is fantastic. It’s a swap that in many ways highlights the simple-but-stylish nature of the original car. DW