Home Not your Average Diesel: Jaguar’s Turbodiesel XE and F-Pace

Not your Average Diesel: Jaguar’s Turbodiesel XE and F-Pace

Jaguar is one of the legendary sports car brands of Great Britain, and they’ve been making great racing and touring machines since 1922. But in almost 100 years, Jaguar has never made an SUV—until this year. The 2017 Jaguar F-Pace is taking the world by storm, with good reason.

The F-Pace offers a 2.0-liter turbodiesel engine that is common to both the SUV and to the all-new Jaguar XE compact luxury sedan. At fi rst glance, two liters looks awfully small to power a mighty Jag, but that’s where the magic happens. The little diesel makes 180 horsepower and 318 lb-ft of torque. When you put that power through Jaguar’s well-tuned 8-speed automatic transmission, you get 0-60 times of about 7.4 seconds in the XE and 8.2 seconds in the F-Pace. 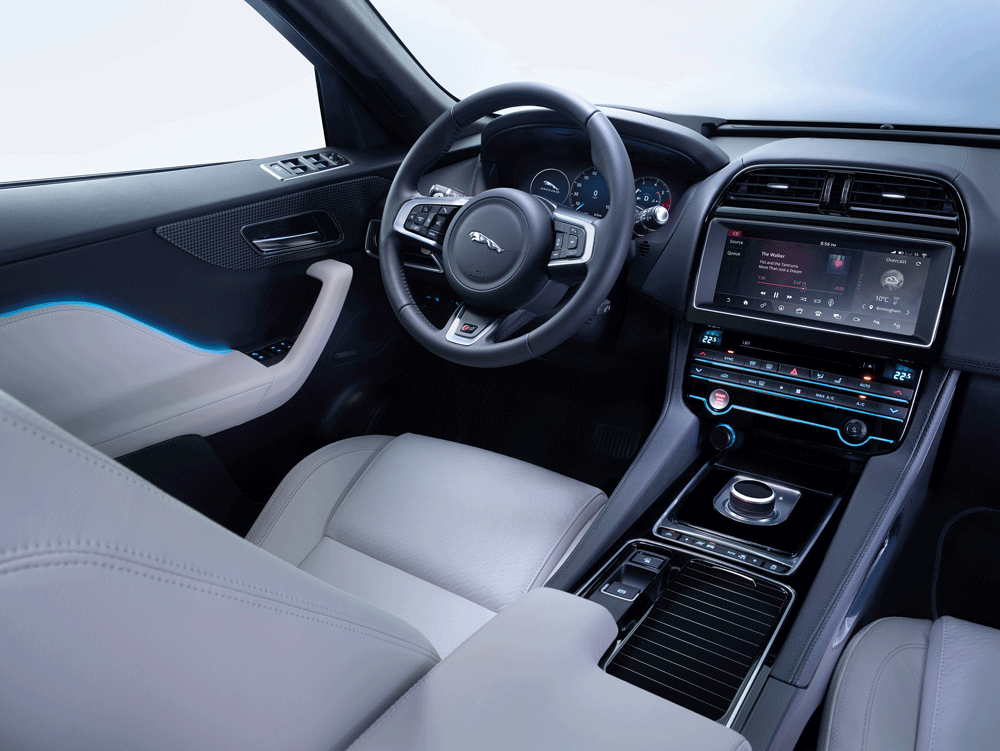 But even those statistics don’t tell the whole performance story. To really get a feel for what Jaguar has done with the diesel engine, you have to drive these vehicles. The 8-speed transmission means you’re always in a good gear for the torque provided by the engine, so both the XE and the F-Pace have no trouble accelerating onto the freeway or making a pass on a mountain road. 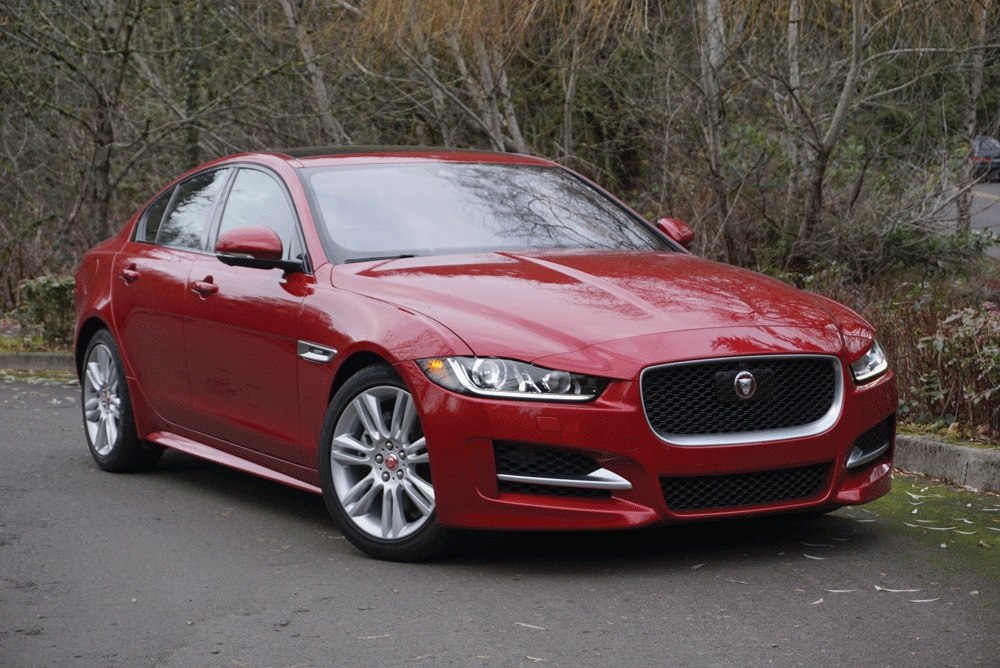 I first drove both the XE and the F-Pace up in the Colorado mountains, and I’ve been in both models again since then.

The XE is Jaguar’s latest of several attempts to come up with an affordable compact luxury vehicle, but it’s the fi rst one that really puts the Jaguar driving experience into the equation. The diesel engine’s power profi le fi ts perfectly into the Jaguar world. The XE is as smooth as a Jaguar should be, but it’s also nimble and responsive. The engine is quiet, but you’ll really feel the 318 lb-ft of torque under your foot. 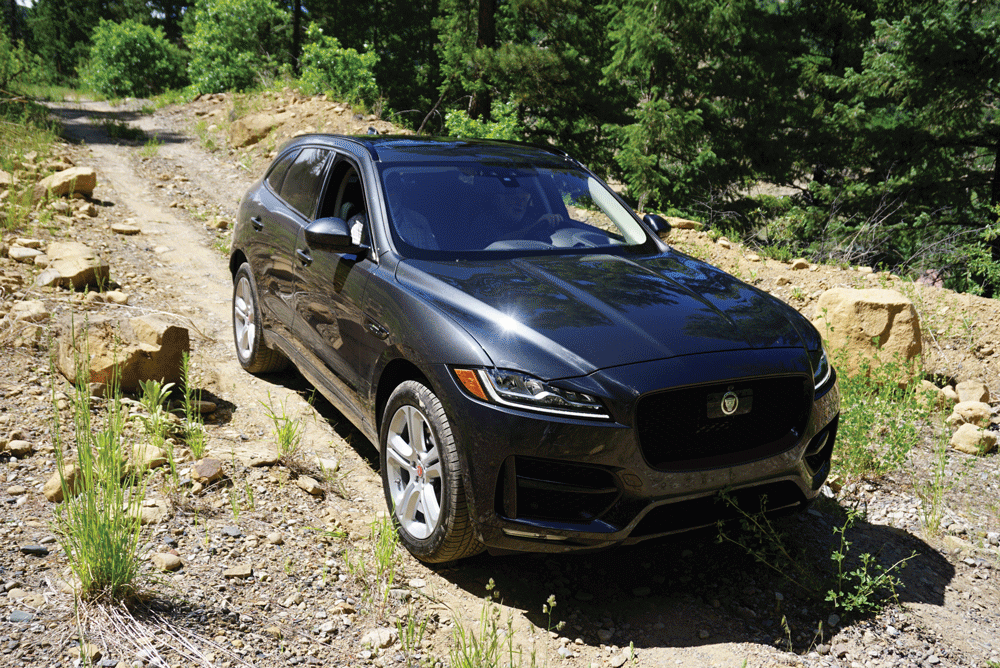 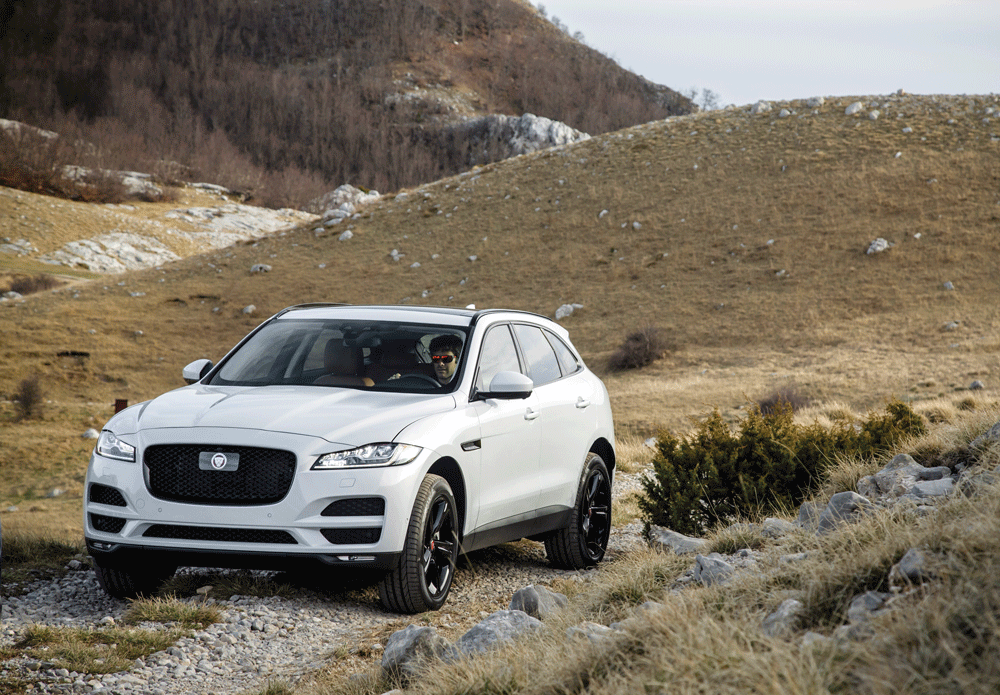 The automatic transmission’s operation is almost imperceptible. The drive selector is an unobtrusive little dial on the console, but you really want to use the paddle shifters mounted on the steering wheel to shift gears. You’ll notice that there’s no lag between asking to move and moving. The XE that I drove also came with Jaguar’s AWD system, which sends most engine power to the rear wheels in dry conditions, but can send up to 90% of power to the front wheels when required.

The XE is technically a compact car, but it feels like a midsize inside. When you get in the XE, it’s all top-shelf luxury. The seats are supportive and comfortable, with six levels of heating and cooling in the front row; heated seats are available in the back, too. I had the R-Sport trim level, which features red-and-black leather seats and a racing-inspired interior, which was exactly the right note for this particular symphony. 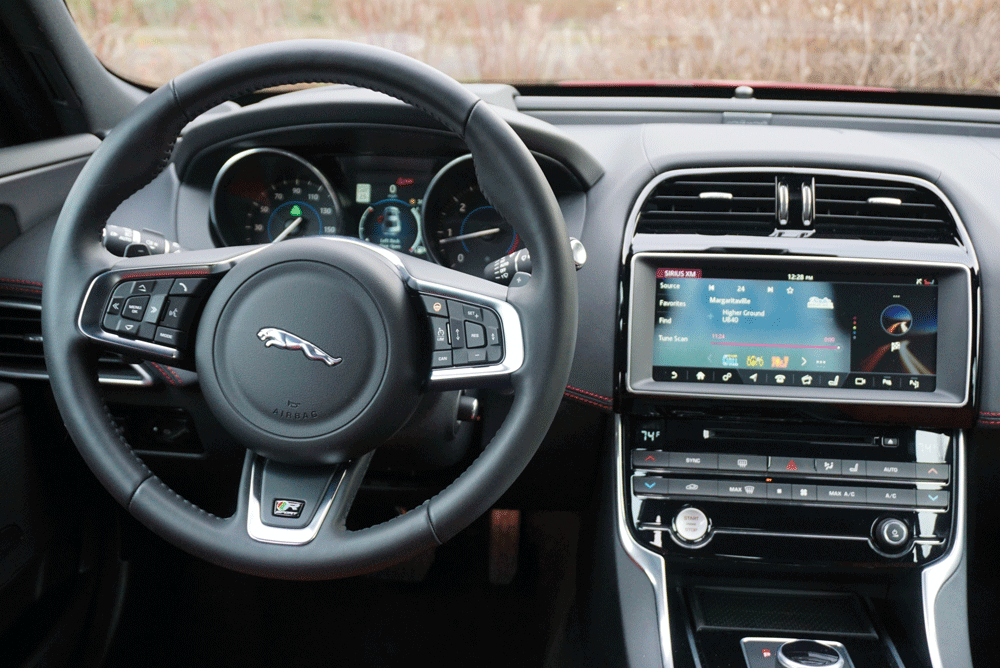 One of the best things about the Jaguar XE is that you can get into the diesel starting at $37,395, and if you go all-in with the optional bells and whistles, you can get the Jaguar XE diesel completely loaded for $49,995. If you compare the Jaguar to the BMW 328d sedan, the BMW starts at over $40,000 and if you build it out with comparable options, the 328d will cost you $57,145.

Jaguar and Land Rover have been under the same management for a while now, but the F-Pace is the fi rst vehicle that really indicates that they’ve been working together. That shouldn’t surprise anyone—if you set out to build your fi rst luxury SUV, wouldn’t you want to have the people who make Range Rovers as your partners?

Land Rover has a long history with diesels, and they make some of the world’s most capable off-road SUVs. The challenge was to bring that expertise to the F-Pace while being careful not to lose the Jaguar driving experience. The proof of their success is measured both on-road and off. When you’re on pavement, the F-Pace is surefooted and offers a sports car demeanor. You can expect tight, precise steering and a supple, compliant suspension that never wallows or surprises you. It feels just like a Jaguar should feel.

The thing that will put a grin on your face is the way that the F-Pace behaves when you take it off-road. Whether you may be following a rocky trail or even scrambling up a loose hillside, the F-Pace draws on Land Rover’s amazing All Terrain Progress Control technology to move confidently at all times. The system uses the same sensors and technology as traction or stability controls, but applies them at low speed to allow the F-Pace to climb just about any trail.

Of course, you need to keep things reasonable when you’re off pavement—the F-Pace comes with low-profile high-performance tires, not big knobby mudslingers, so you won’t be winning any rock crawls in the Jag. But if your favorite spot is a few miles up a road too small to have a name, there’s nothing to worry about.

Another thing to love about the F-Pace is the interior. It’s supremely comfortable whether you’re slicing the curves on a mountain road or taking the trail. Leather touch surfaces are standard on all trims, and the seats are comfortable and secure. There’s plenty of headroom and legroom for five adults in both the front and rear seats, and 33 cubic feet of cargo area in the back. Beyond being a sports car with off-road chops, the F-Pace is actually a usable family wagon.

Here’s a secret: If you park the F-Pace next to Jag’s most excellent halo sports car, the F-Type, you can see the family resemblance. It comes through in the car’s shoulders and belt line. You get the same aggressive stance, the same flowing lines, and a sleek, muscular aspect that tells you that this is not a lumbering cow of an SUV, but rather a jungle cat built for speed.

Here’s the kicker—the diesel-powered F-Pace is the lowest-priced Jaguar model you can get. For $42,985, you can get into the 2017 F-Pace with the diesel and all that Jaggy goodness. That’s about the same price as the Jeep Grand Cherokee with the EcoDiesel if you want to make an apples-to-apples comparison. None of the other Europeans or the Asians have anything like this. If you’re hunting for a nice SUV with a diesel, you really need to check out the Jaguar F-Pace.DW 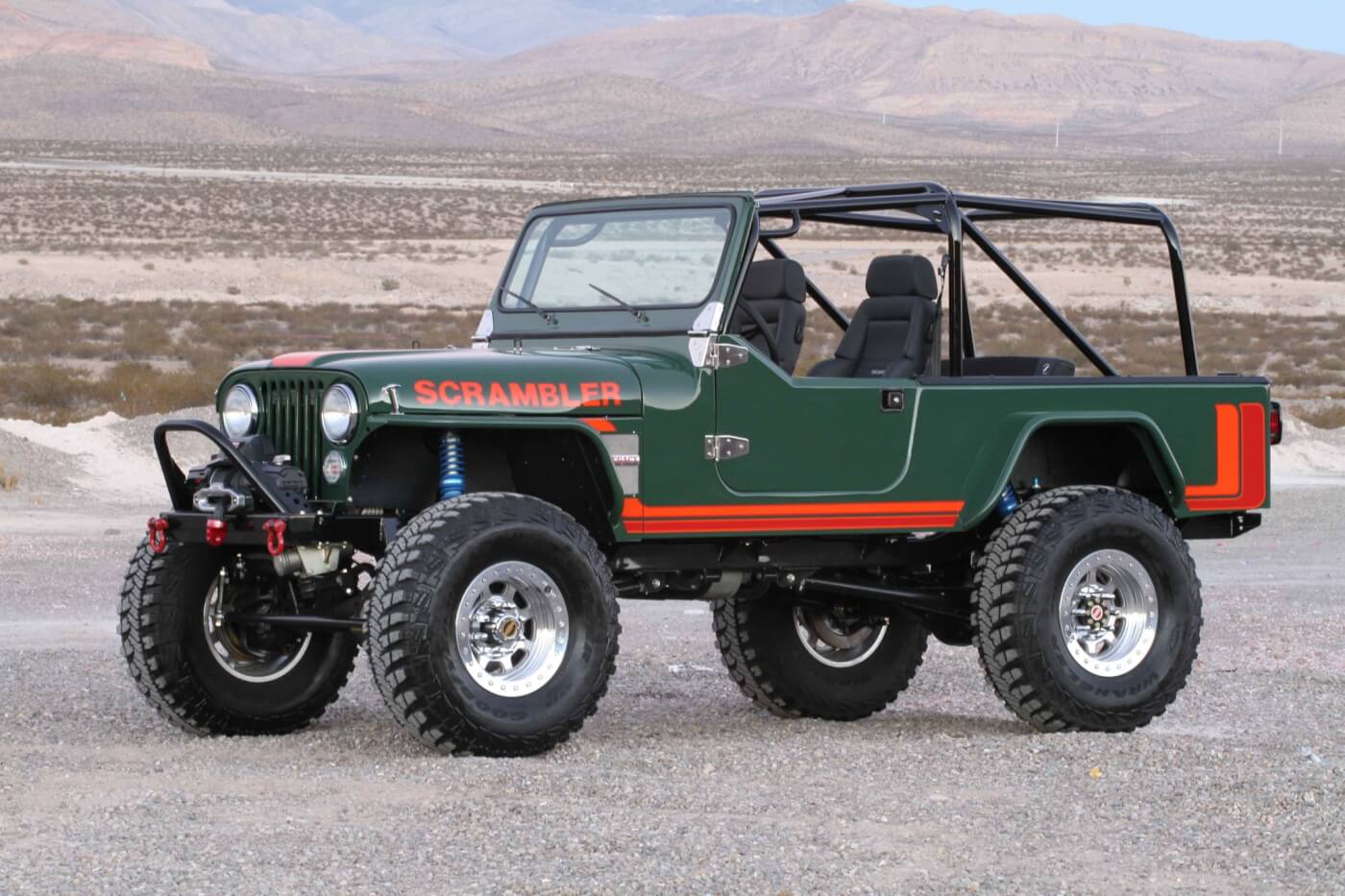 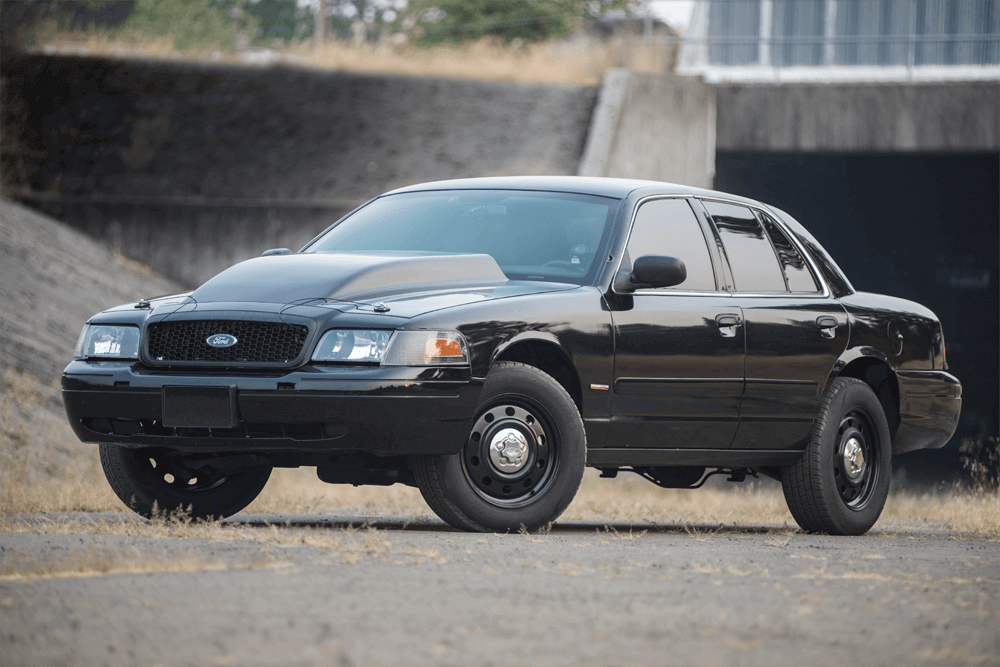 For most of us, it’s natural to do a double-take when we spot an old cop car. But folks who come across Matthew Barnett’s retired police cruiser aren’t just momentarily preoccupied with its…