In the early 1970s, Allis-Chalmers joined the ranks of the manufacturers offering articulated four-wheel drive tractors. They started by rebadging the Bearcat from Stieger in 1972 and calling it the model 440. This 160 horse tractor got them on the field as they developed a new model in-house. The 440 carried them through 1975 until the 7580 emerged in 1976 as Allis-Chalmer’s (A-C) first in-house articulated 4×4. It was a good tractor but a bit underwhelming in light of the fierce competition in the super tractor horsepower wars that were beginning to flare up.

Late in 1977, the 8550 debuted as A-C’s biggest tractor. They rated it at 250 drawbar horsepower, though the Nebraska test would give it a few more. While it wasn’t the biggest or most powerful tractor on the market, it was in the top tier and gave A-C plenty to crow about. A-C knew in advance it would need to up the ante and had begun the development of a new six-cylinder engine that would become known as the 6120T. It displaced 731 cubic inches and cranked out 300 flywheel horsepower. It was a destroked (5.625 vs 6.50) derivative of a line of 844 ci, 21000 and 25000 series diesels that had been on the truck, heavy equipment, marine and industrial market since 1968. Yeah, Allis-Chalmers had it’s own engine division, formerly the Buda Engine Company, which it acquired in 1953.

Of course, a tractor is more than and engine. The 6120T was backed up by A-C’s 20-speed Power Director transmission. It was a beefed up version of what was used in the 7580 4×4 and the basic design and operation was the same as what had been introduced into the 7000 series tractors just a year before. A 1000 rpm PTO was standard, as was power steering and a burley swinging drawbar. A three point, Cat 4 hitch was optional. A  ROPS (Rollover Protection System) cab was standard, with heat and AC. AM, AM/FM and AM/FM/8-Track were optional.

Because the 8550 was in the top tier of the high power tractor market, the A-C marketing folks took full advantage of that fact. Before long, the advertising was using the term Super Beast was being applied and the name has stuck. The 8550 is the Super Beast, then, now and forever.

The 8550 brought heavy tractor market parity for A-C but that didn’t necessarily result in a big jump in sales or profits. That wasn’t the fault of the tractor as much as it was a combination of the failing tractor market, the national economy and the choices A-C made to deal with all of that.

The 8550 was built into 1981 and superseded by 4W-305, Mechanically, the 4W-305 was the same tractor but it got a much improved cab, new styling and a host of small improvements. The 7580 was similarly updated into the 4W-220. The American recession of the early ‘80s were disastrous for agriculture and that hit farmer and the industries that supplied them very hard. As A-C’s financial situation grew more precarious, they were vulnerable to a buyout and that happened in May of 1985, when the German company Klockner-Humboldt-Deutz took them over. The company became Deutz-Allis and by the start of 1986, most of the A-C line had  been discontinued and replaced with Euro-built Deutz built units. Some A-C tractors  remained in production until December of 1985 and those were rebadged “Deutz-Allis,” along with any tractors remaining in dealer inventory. 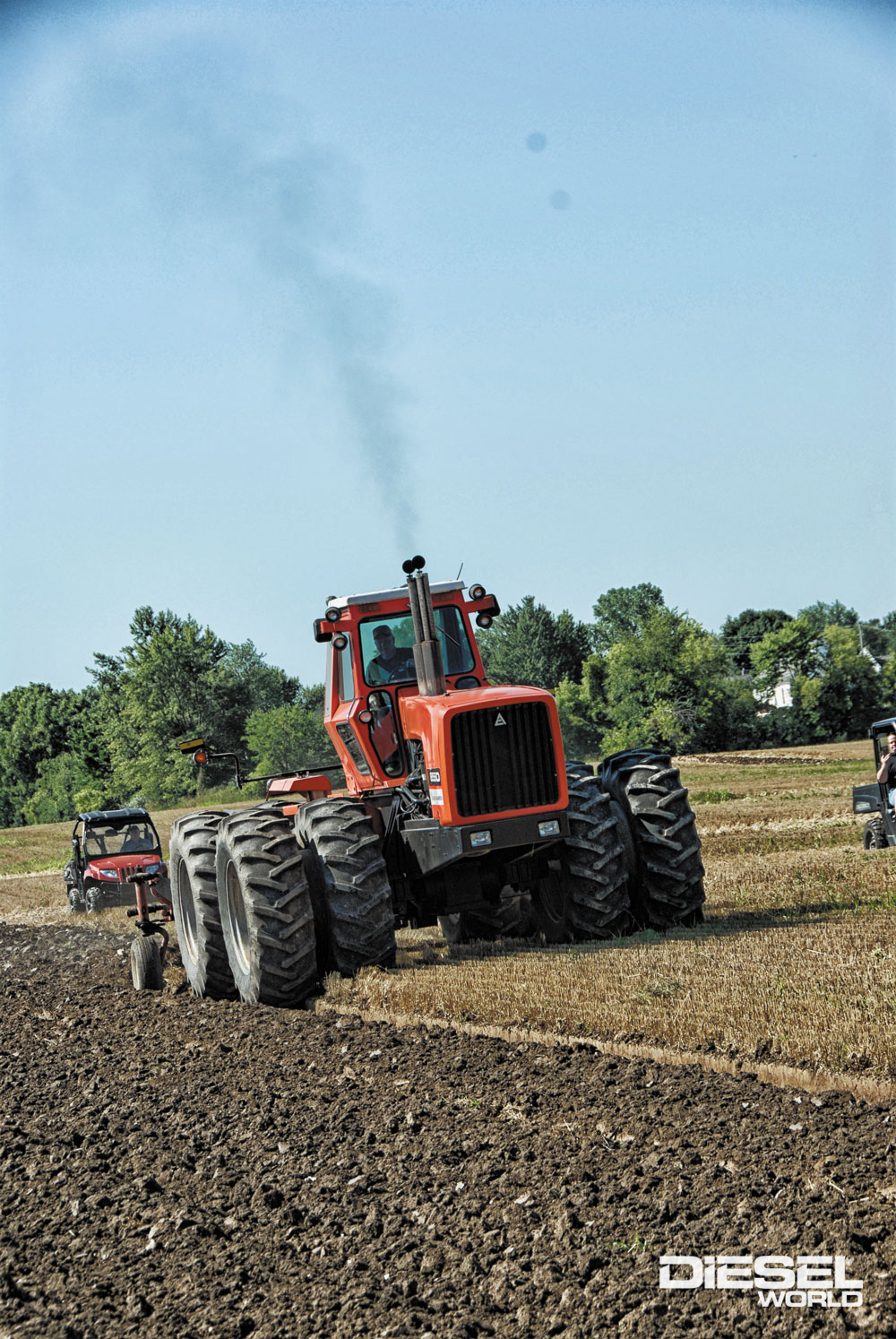 In the end, approximately 1,020 8550 tractors were built and 412 4W-305s. Those really aren’t bad numbers overall. Generally speaking, the articulated four-wheel drive tractor had risen to prominence in the ‘70s but slipped backwards a little by the ‘80s because the FWA (Front Wheel Assist) variant of the standard tractor became a rising star in the market. It much less expensive and could do 80 percent (at least) of what a similar-sized articulated tractor could do. That gave it a more generic place in the market, leaving the big articulated units to their specialty work in mega farming and specialty earthmoving.