A Tale of Two D2s

In the early days of motorized farming, crawler tractors had a big part to play in some parts of the country. Crawlers could put more power into traction with less ground pressure than anything else. The Holt Manufacturing Company and C.L. Best were individually among the pioneers in the crawler realm when they merged in 1925 to form the Caterpillar Tractor Company. A diesel powerplant was one of their earliest priorities and the D9900 diesel debuted in 1931 powering the legendary Caterpillar Model 60 (see Diesel World, July 2008 issue). By they end of the 1930s, Cat had a vast array of diesel-powered crawlers, as well as a large line of diesel engines for industry of all types.

In the days of small farms and small tractors, small diesel crawlers also had a following in the ag world. The crawler gained the most favor on larger acreages out West and on the soft ground of the fertile Central Valley of California. One of the first new designs to come after the Holt/Best merger was the Caterpillar 10 of 1928, a compact crawler delivering 18.1 PTO hp from a 143 ci gas engine. A small diesel crawler didn’t come from Cat until 1938 in the form of the D2. 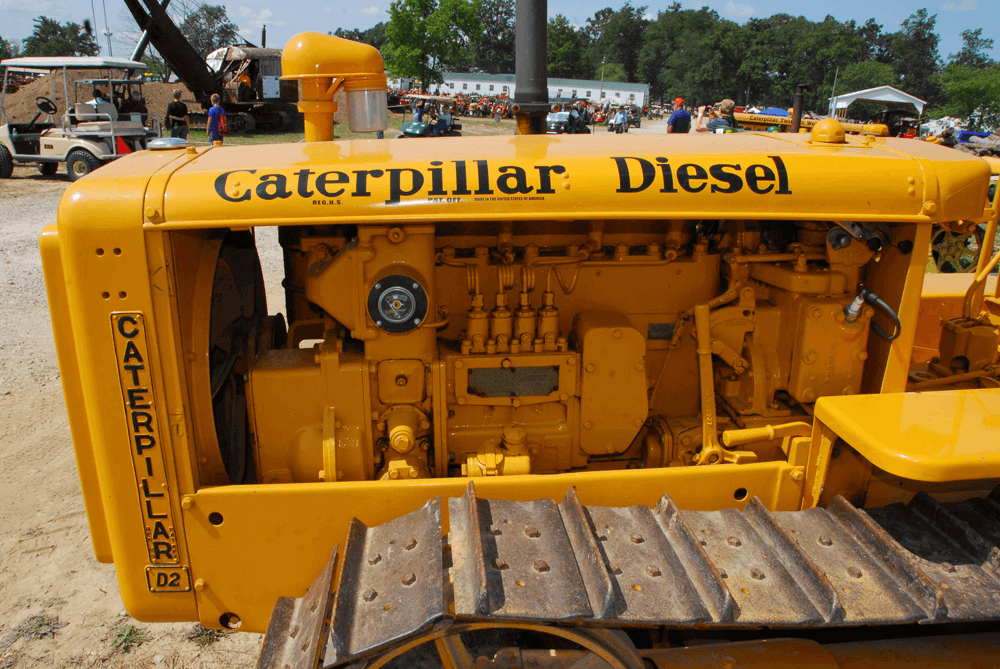 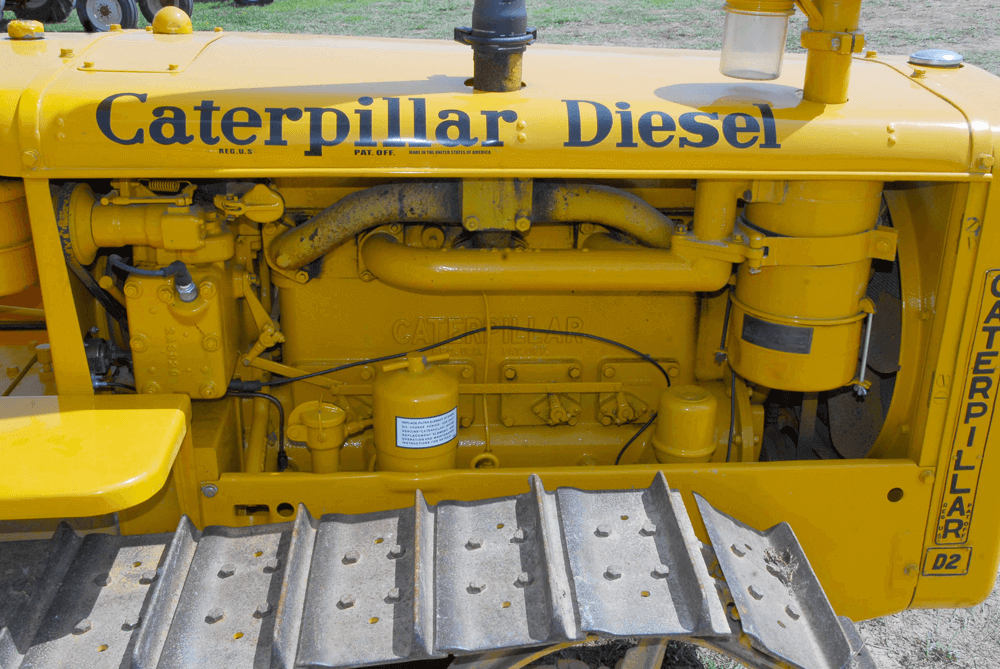 The early D2 crawler was powered by a new engine, the four-cylinder D3400 (see DW November 2017, “The Ship’s Cat” in Vintage Smoke column). This was the smallest diesel Cat had made to that time. Small in displacement but not small in the physical sense. It displaced only 221 cubic inches but weighed a whopping 1,600 lbs. It had many heavy duty design characteristics as well, including wet sleeves and five main bearings. It cranked out a maximum of 34 flywheel horsepower at 1650 rpm (32 hp continuous at 1525 rpm). When it debuted, the D2 was one of Caterpillar’s most modern crawlers and helped cement Caterpillar into history.

The D2 came in two track gauges 40 and 50 inches. Track gauge is the center to center dimension of the tracks. A ’48-47 J-Series crawler with a 40 inch track gauge would have a 3J serial number prefix and a 50 inch unit would be a 5J. Other track variations and options included the size of the idler wheels (19 vs 23 in.) and the track roller frames. The idler wheels are the front wheels around which the track rolls. Agricultural crawlers most often had smaller idler wheels than units destined for construction use. This lifted the very front of the track a little off the ground. This reduced the amount of track on the ground and made the tractor more maneuverable, and reputedly reduced track wear, but a bit more prone to a “rocking horse” motion.

The track roller frames hold the wheels upon which the tractor rides over the portion of the track on the ground. Standard was the short frame (four rollers per side) and optional was the long frame (five rollers). The long frame option made the tractor more stable and comfortable but reduced maneuverability a little. Few five roller D2s are seen and they were generally used on crawlers in the roughest service or carrying a lot of equipment.

Ground contact area on the J-Series D2 was listed at 1,308 square inches with a 54.5-inch long contact length and the standard number of 30, 12-in. width track shoes. Wide track 5J crawlers could have 16-in. width shoes but there were many other specialized shoes, from narrow ice shoes, shoes with rubber pads for street use and shoes with extra grousers (cleats).

The J-series D-2 had a five-speed gearbox and a top speed of 5.1 mph in 5th. Wound out in first gear, it could do 1.7 mph. Besides the track options mentioned above, the D2 could be ordered with a rear PTO, either with a 10 spline shaft or also with a belt pulley adapter. It came standard with a swinging drawbar but various mounted toolbars were available. The D2 could be configured as a bulldozer, either with products from Cat or aftermarket. A total of 19,161 J-Series D2 crawlers were built.

In 1947 the updated U-Series D2 emerged. As with the previous generation, they came in 40 and 50-inch track widths (3U and 5U respectively). The biggest news was the powerplant, the new D311, which was a 252 cubic inch indirect-injected four-cylinder diesel with a crossflow head. Drawbar power increased by 20 percent and maximum drawbar pull by 18 percent. A greater array of accessories and tools were made available, including canopies, toolbars and even cabs. Beside the engine, in most ways the U-series D2 was the same as the J-Series… at least to 1953.

For 1953, Caterpillar advertised the “New!” D2 and the tractor got a major makeover. In order to facilitate a more easily serviced clutch, Cat made the final drive housing longer so the clutch could be replaced without pulling the engine. As a result, the tracks were longer by two shoes (a total of 32), the ground contact length increased to 60.08-inches and area to 1,460 square inches. A track carrier roller, supporting the upper center of the track where it dips between the front idler and the rear drive sprocket, became standard rather than optional.

The ’53-on D311 engine also made a bit more horsepower, with a 10 percent increase in drawbar and belt horsepower. With the extra room, an increase in standard fuel capacity from 20 to 26 gallons was possible. As before, fender mounted auxiliary tanks were available. Operator comfort was enhanced by improvements in the seat (position and size) and controls (placement and leverage). An underseat toolbox was added and the fenders updated to 3/8-in. plate. The U-Series D2 was manufactured through 1957 with 26,454 units built.

After being discontinued in 1957, the D2 was not replaced and the D4, a larger 4-cylinder crawler, took the bottom place in the lineup. The reasons why probably have to do with faltering sales of the small crawlers and a general trend towards larger and higher-powered machines. Later, small less expensive import crawlers began putting a lot of sales pressure on all the American manufacturers.

The two crawlers you see here represent the D2 series at both ends of the production cycle and both ends of the application range. Nathan Hirschy’s 1939 3J narrow track was built as an ag crawler and mounts a rear PTO. Mark Deuchle’s 1956 5U wide track mounts a Model 44 hydraulic unit and a Caterpillar 2A angling blade set. Both were viewed at the 2017 Tri-State Gas Engine and Tractor show at the Jay County Fairground in Portland, Indiana. 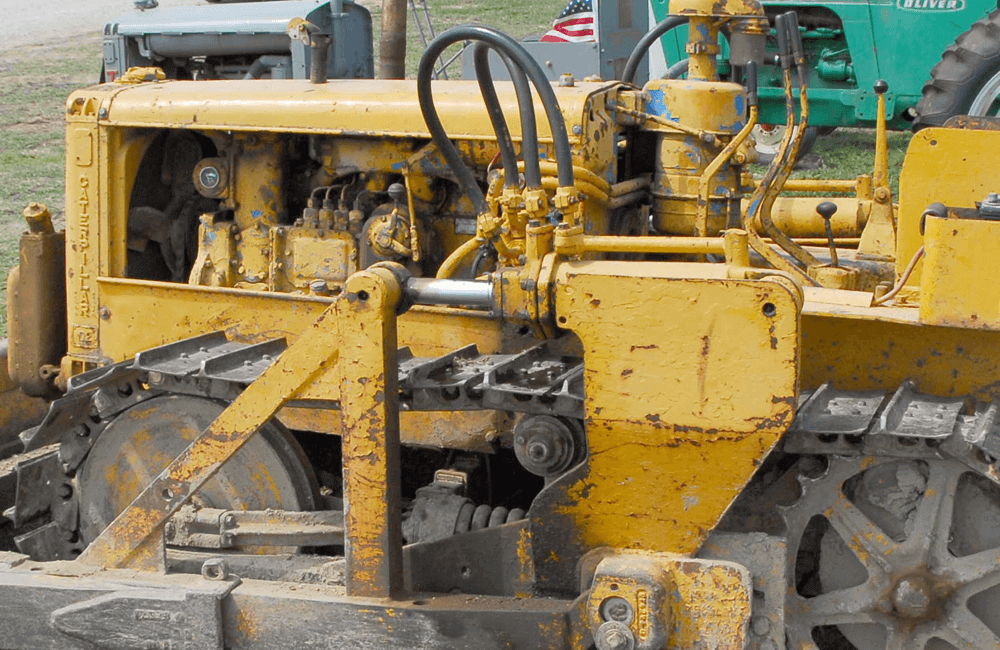 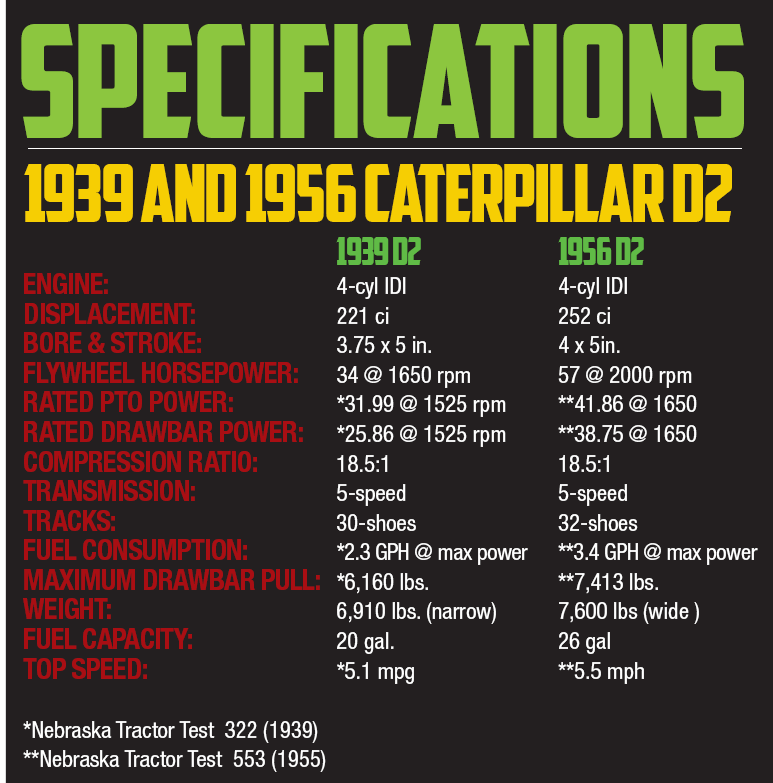 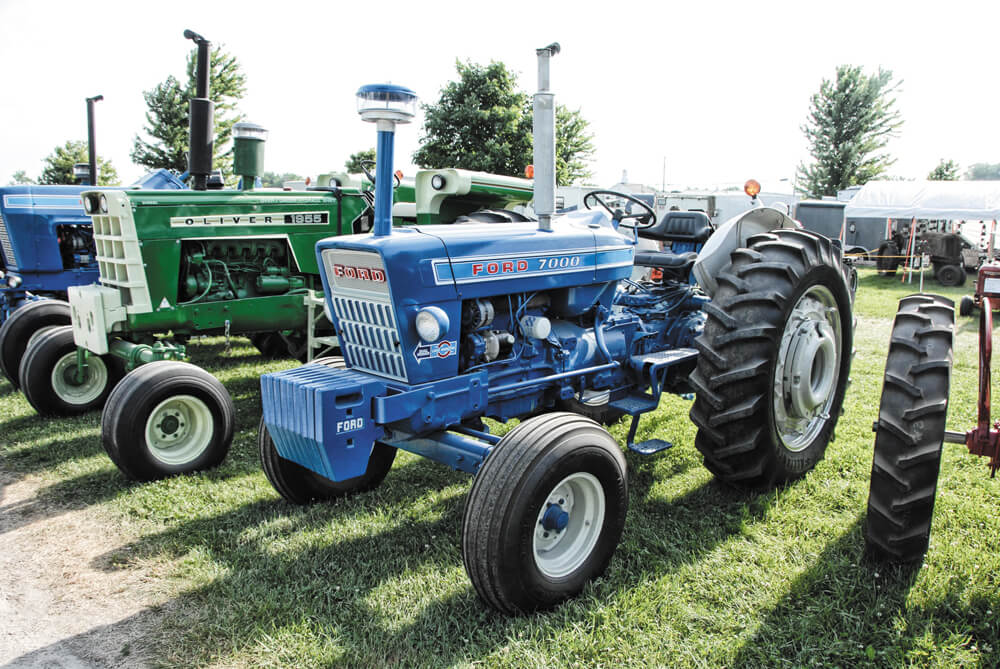