Home MADE IN AMERICA!

By the end of the 1980s, White Farm Equipment was in trouble. The company had begun in 1960, when White Motor Company bought Oliver Farm Equipment. In ’62, they acquired Cockshutt and in ’63 Minneapolis- Moline. By the end of the ‘60s, the brands were operating under the White Farm Equipment banner and they wer a major player in the world agricultural manufacturing scene. Just a few years later, the brands and models were merged and rebranded as White tractors. White had a decent thing going but a recession and some financial missteps put them on shaky ground in the early ‘80s, along with most of the rest of the ag industry. What else can you do in that situation but plug ahead, and that’s what they did. 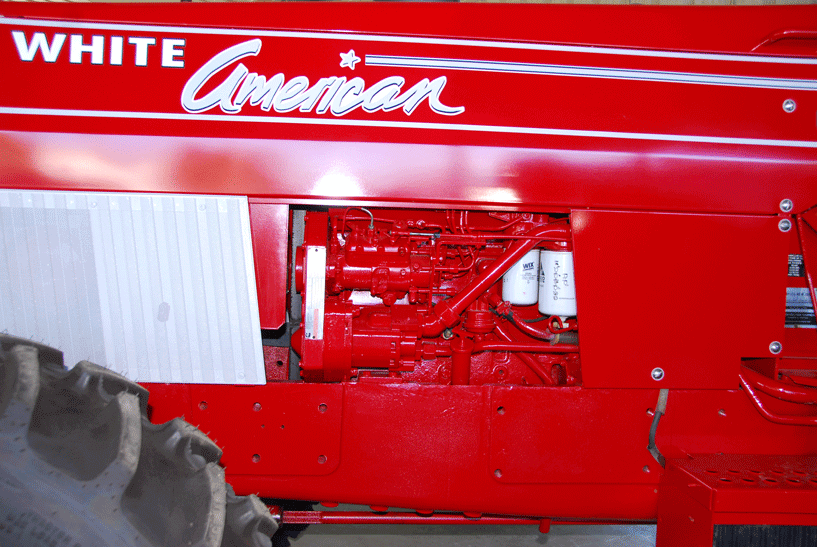 Up to 1989, White had a deal with the respected Japanese tractor manufacturer, Iseki, to build their smaller units in the 30 hp to about 75 hp range. The Isekis were good tractors and nobody said different, but White wanted to put more of their people to work as well as be able to reintroduce an American made smaller tractor. The eventual result of that push were the Model 60 and Model 80 tractors, dubbed the White American Series.

To create these tractors, they used the smaller final drive inherited from the older Oliver 1550 and 1650 final drives (used in the White 2-70 models also) and coupled them with the recently introduced B-Series fours from Consolidated Diesel Corporation (CDC). CDC was a joint venture between Case and Cummins and you might know the 239 ci CDC four as the 3.9L 4BT Cummins. It was a whiz-bang engine then and it’s a whiz-bang engine now! The final drives were on the old-school side but were well proven and a good fit for the small tractor market.

Both the 60 and 80 tractors had the option of two-wheel drive or front wheel assist (known as FWA today but which White called PFA, for Powered Front Axle). The two models were very much the same in size and stature, but the 60 had a naturally aspirated 60 PTO horsepower engine and the 80 was turbocharged and cranked out 80 PTO ponies. Those were the factory ratings, by the way. The Nebraska tests rated them at 61.61 and 81.48 horsepower respectively. Many owners and technicians have said both those ratings were wildly understated and that 90 horsepower from the White 80 was fairly common. Retired engineers from White acknowledge this with a wink and a smile.

The normal color scheme for the 60 and 80 was Silver but in order to tug on the nostalgia strings of old Oliver, Cockshutt and Moline owners, they offered special editions in Oliver Green, Cockshutt Red and Minneapolis- Moline Yellow. While the majority of the Model 60s and 80s built from ’89 into 1991 are Silver, the next most common color is Green, followed by Red and then Yellow. Unconfirmed production numbers are listed as 162 silver 60s, 435 Silver 80s, 91 green 60s and 165 green 80s, 19 red 60s and 19 red 80s and a mere 8 yellow 60s and 9 yellow 80s.

The base model features a 6 speed transmission but optionally, you could add a three-speed power-shift feature to further split the gears. As stated earlier, a FWA was optional and many survivors of the 900+ American Series have that option. A ROPS was standard and both canopies and cabs were optional. Power steering was standard as was a 540 rpm PTO and Cat I/II 3-point lift.

The American 60 and 80 models were a fine tractor that were lost in the shuffle when the newly formed AGCO acquired the White tractor lines in 1991, later getting the rest of White Farm Equipment. Once AGCO was in control, the 60 and 80 were discontinued and replaced for 1992 by tractors built in Europe by SAME-Lamborghini-Hurliman. As a result, with only a few hundred of both types, the Americans are reasonably uncommon. By all reports they were popular and successful. Today those Americans in the special paint are attracting newfound attention.