Prior to 1961, Ford’s worldwide agricultural engineering, marketing and production operations were scattered all over the globe. That year, the company began consolidating the operation for greater efficiency. The end result was the “Worldwide Tractor” that debuted for 1965, a single line of tractors to be sold all over. Existing features from existing products were homogenized with new ones. Design input came from all Ford sources and the new lineup debuted with a lot of new technology and a new look. The British arm of Ford Tractor Operations was the farthest ahead in many ways and took the overall lead.

Ford tractor production coalesced in four places. Birmingham, England, produced many of the bigger tractors, with a U.S. factory in Highland Park, Michigan, building the higher-horsepower units destined for the American market. A new plant in Basildon, England, built the smaller tractors and a plant in Antwerp, Belgium, built many tractors for the Euro market. These tractors have become known as the “Thousand Series,” comprising the 2000 (3-cyl, 32 hp), 3000 (3-cyl, 39 hp), 4000 (3-cyl, 47 hp), 5000 (4-cyl, 56 hp) and 6000 (6-cyl, 67 hp). The 1965-75 Thousand Series would evolve greatly in that decade, as would Ford Tractor Operations until it was finally sold to Fiat in 1991. The Ford line would eventually become the New Holland brand.

For 1968, Ford updated and restyled the tractor line, replacing the 6000 with the much more powerful 105hp 8000 and upping the power on the rest. As time passed, one of the most popular of the new Worldwide designs turned out to be the 5000 model. It was that “Three Bears, just right” size farmers liked as a utility or even as a main tractor for smaller acreages.

The 1968 5000 series, built in Basildon, debuted as either a general purpose (GP, model 5001) or row crop (RC, model 5002). The main difference in the RC versus GP was a higher stance. On the wide front tractors, this was accomplished with a higher riding, adjustable-tread, front-axle design mounting 7.50-16 versus 6.00-16 tires. A narrow front version was available, also with 7.50-16 tires. In back, the RC used 38 inch rear tires (13.6 or 15.5-inch width) on power-adjusted rims. The GP tractors are most often seen with 6.00-16 front tires and 16.9-30 rear tires. The higher stance on the RC was accompanied by a platform seating arrangement, as opposed to the lower seating arrangement on the GP tractors that straddled the gearbox.

Two gearboxes were offered in the 5000, an 8-speed mechanical unit (four gears in the main transmission with a two-speed range box) or the 10-speed Select-o-Speed (S-o-S). The S-o-S was a clutch less, planetary-gear transmission that was shifted hydraulically. It had some quirks when introduced in 1959, but by the late ’60s S-o-S was a reliable unit and continued in production through 1975. An effective mechanical diff lock was standard, as was power steering on the wide front tractors. 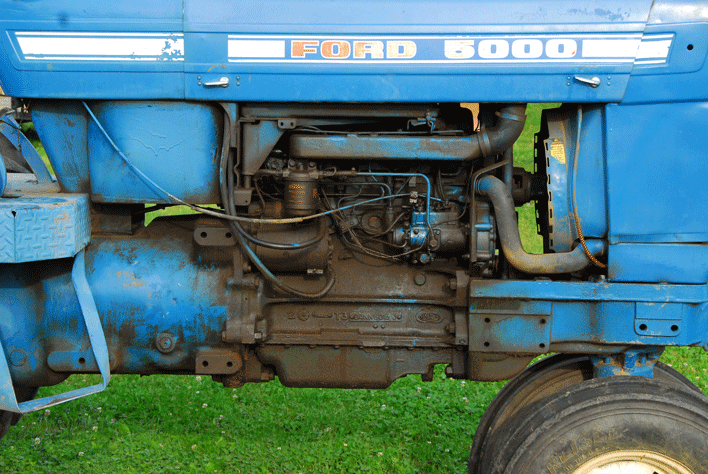 Cabs were available for the 5000 models but are rarely seen in the United States. ROPS appeared on the 5000 in the early ’70s and a canopy could be added to it. Generally speaking, both versions of the Ford 5000 were well laid out and comfortable units.

“TWO GEARBOXES WERE OFFERED IN THE 5000, AN 8-SPEED MECHANICAL UNIT OR THE 10-SPEED ‘SELECT-O-SPEED.”

The 5000 models were produced into late 1975 and replaced by the updated and restyled 70hp 6600, which was a natural evolution in the same general weight class. The Select-o-Speed option was replaced by a 16-speed power shift gearbox. The 5000 was one of the most popular Ford models of its era, both here and overseas. In fact, it was one of the best-selling Ford models ever in Britain.

The 5000 is both a collectible tractor and one that is still viable out in the field. Because all the Thousand Series tractors were so interchangeable and popular, parts are still widely available from New Holland and the aftermarket. The Thousand Series are some of the best-known tractors worldwide and are commonly seen across the globe. In the ’90s, when New Holland replaced the designs that had evolved from the Thousand Series with completely new units, they sold off the old-school designs and tooling in the ’90s and Thousand Series progeny lived on under new nameplates… and still do.