IN-DEPTH LB7 DURAMAX HEAD GASKET AND FUEL SYSTEM REPAIR
At the time of its introduction in 2001, the LB7 Duramax was considered the most advanced diesel engine to be used by any OEM in the light duty truck market. The revolutionary V8 diesel used aluminum cylinder heads and a common rail fuel injection system with a high pressure CP3 injection pump that made everyone a skeptic. While that LB7 platform was replaced with the LLY in the middle of 2004, the basic internal design of the Duramax has been left virtually unchanged up to the 2016 model year. Sure, it received some updates and changes as the years went on to better fit emissions requirements, but there is no doubt that the Duramax engine has been a homerun for GM. It’s an engine that is super reliable and fully capable of doing anything a truck owner needs, whether it’s used for towing construction equipment around all week or tearing up the drag strip on Friday nights.

That being said, the LB7 isn’t without its faults. Since it was taken out of production more than 10 years ago and mileage just continues to increase, there are two main points an LB7 owner should prepare for: blown head gaskets and bad injectors. These are both relatively common problems you might expect to deal with on the 2001-2004 LB7 Duramax, but you can rest a bit easier knowing the aftermarket has had a decade to develop and perfect the parts you need to correct it. It’s now better than it was from GM.

As an owner, or someone in the market for the LB7, what signs do you look for to investigate further into potential head gasket or injector problems? On the head gasket side, it’s just like any other internal combustion engine: When that head gasket seal is compromised, the motor will lose coolant, which could pressurize the degas bottle enough to blow the cap; and the upper radiator hose could also be hard—from excessive pressure—long after the engine has been shut down and cooled off. On the injector side of things, gray/white smoke on takeoff is usually the first visual sign of a problem, as excessive fuel gets dumped into the cylinders and isn’t burned efficiently. The engine oil could start being diluted by excessive amounts of fuel seeping past the piston rings to diagnose this. A basic injector balance rate test can be performed with a scanner in the OBD port. In additional, a trained mechanic can disconnect the injector return lines to check fuel return rates.

There are several reasons and a variety of opinions as to why the LB7 head gaskets fail, such as excessive overheating problems that could occur when towing or working the engine hard; and excessive boost and extreme cylinder pressures in a high-performance application that could allow the stock head bolts to stretch and actually lift the heads from the block. But one of the main contributing factors could be the head gasket design itself. In the pre-2006 Duramax engines, GM used a multilayer steel gasket that utilized a containment ring around each cylinder bore. This containment ring, for lack of a better word, used a “crimped” edge, where the outside layer would basically wrap around the other layers and crimp it all together around the cylinder bore. It has been suggested that this crimped edge would weaken after hundreds and thousands of heat cycles, eventually failing and allowing the combustion pressure to get between the gasket layers to create a leak. These leaks can happen internally, meaning coolant will find its way into the cylinders, or externally, where the coolant will seep through the head and down the sides of the engine block where you’ll see it.

After recognizing the issue, GM re-designed the head gasket to what is referred to as a ‘riveted’ gasket, which is still a multi-layer steel gasket, but it no longer uses that rolled edge containment ring. This change has offered better results in the later Duramax platforms. Replacing head gaskets in the Duramax engine is a labor intensive job and requires a good stack of parts to get it back together correctly.

Luckily for Duramax owners, Merchant Automotive (MA) of Zeeland, Michigan, has specialized in everything Duramax since 2004, offering a complete head gasket kit that has the necessary parts to get this job done right. The kit includes OEM Grade C updated head gaskets, along with every other OEM O-ring, seal, gasket, and piece part you’ll want to replace. While the basic kit includes brand new stock head bolts, as an upgrade, MA suggests the ARP head stud kit, which offers a higher tensile strength and torque sequence, equating to a better clamping force on the cylinder head. When paired with the redesigned head gaskets, you should never have to worry about blown head gaskets again.

Unfortunately, for an LB7 owner, the injectors are difficult to access and relatively expensive to replace, so it’s a job that will take an experienced mechanic more than 12 hours to do.

When GM first discovered just how common the injector failures were, they owned up to the mistake and extended a 200,000-mile warranty on the LB7 injectors to customers. However, that warranty had a deadline of seven years, so even the latest 2004 model is well over the coverage period and you’ll be on your own to cover the expense of replacing them. 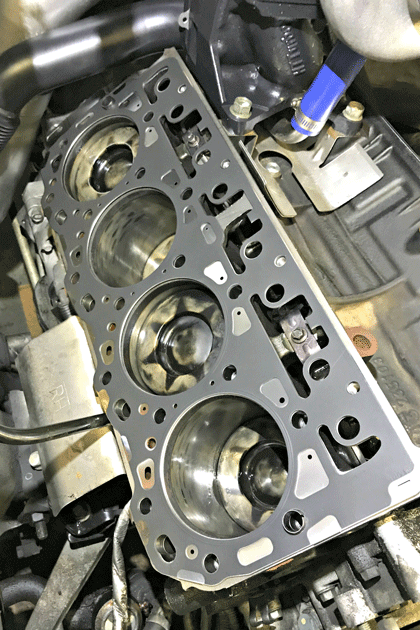 Like the head gasket issues, there are a few different theories as to why these injectors fail and no one, not even GM, has really offered an actual reason. Some say it’s a fuel filtration problem as most fuel filters out there only filter down to 7-microns. So perhaps small debris and contaminants make it through the injectors and cause the ball and seat to wear out prematurely? Some think it’s a lack of lubrication from the Low Sulphur and Ultra-low Sulphur diesel that is produced now for cleaner emissions and it doesn’t offer the lubrication the injectors need. Maybe it’s just poor fuel supply, where the injector doesn’t get great fuel quality and entrapped air in the fuel creates an issue? The addition of an aftermarket lift pump could help with all of this, as you get better filtration, a water separator and air bubbles can be removed and returned to the tank. Another suggestion is that the LB7 injector design being placed inside the valve cover subjects it to more heat, and the internals and electronics can’t survive 100,000+ miles. An inferior metal and insufficient heat treatment on the original release injector bodies may also be partly to blame.

Again, thanks to Merchant Automotive, the LB7 Duramax platform can continue to survive and improve its lifespan with their newly released replacement injectors, which are completely new from the ground up. MA has used their years of knowledge and testing to develop their own injector that no longer requires a core return, as they don’t deal with re-manufacturing injectors, which may not have the lifespan you’d expect when doing such a labor intensive job. The new MA injectors use the best materials possible, including an injector body that has been developed to eliminate cracking. Inside, the injectors receive a chrome plated ball seat for better wear and corrosion resistance. At the nozzle, the needle tip gets a Diamond Like Carbon (DLC) Coating that offers unique properties for low friction and makes them highly corrosion resistant.

Along with the replacement injectors, the MA injector package will come with everything you need to do a full and thorough injector install. New injector feed lines will be required, as the originals are prone to debris and contaminants reaching the injector when they are removed. It’s also suggested that the MA Heavy Duty return line bolts be used to replace the factory bolts, which are prone to rounding off when removed. The MA bolts will be easier to torque to spec and ensure no under valve cover fuel leaks once the job is completed.

This particular truck is a super clean, virtually, show-room condition, low mileage 2004 model. At just 86,000 miles, the loss of coolant while towing was a sure sign of an internal engine problem and some rising injector balance rates would lead to the inevitable (breakdown?). Used mainly for towing a 40-foot, fifth-wheel travel trailer and large boat all summer long, the truck had the basic upgrades, like intake, exhaust, EFI Live Tuning, lift pump, and a built transmission, already done to it. The truck made a respectable 400hp in the tow tune and peaked at 480hp in the performance tune, so it wasn’t pushed to its absolute limits, and boost levels with the stock turbocharger were still limited to a ‘safe’ 25-psi. So, blown head gaskets were a bit of a surprise to the owner, but it just goes to show that their failure can happen in any LB7, regardless of mileage, use, and/or abuse.

In next month’s follow-up article to the head gasket and injector replacements, the engine will get some further upgrades with additional airflow from some improved exhaust manifolds and up-pipes from Dmaxstore.com, a better breathing ProMax SX-E turbocharger from High Tech Turbo, and a high flow Y-bridge, piping and intake kit from Wehrli Fabrication. DW