One of the differences between show cars and show trucks is that, when it’s time to pull double duty and get through everyday stuff, trucks aren’t afraid to get down and dirty.

Custom Auto LLC’s pristine white dually is no exception. From hauling kids and groceries to towing the shop’s portable dyno, their 2016 Chevy 3500HD Crew Cab long bed was meant to be a workhorse from the get-go. 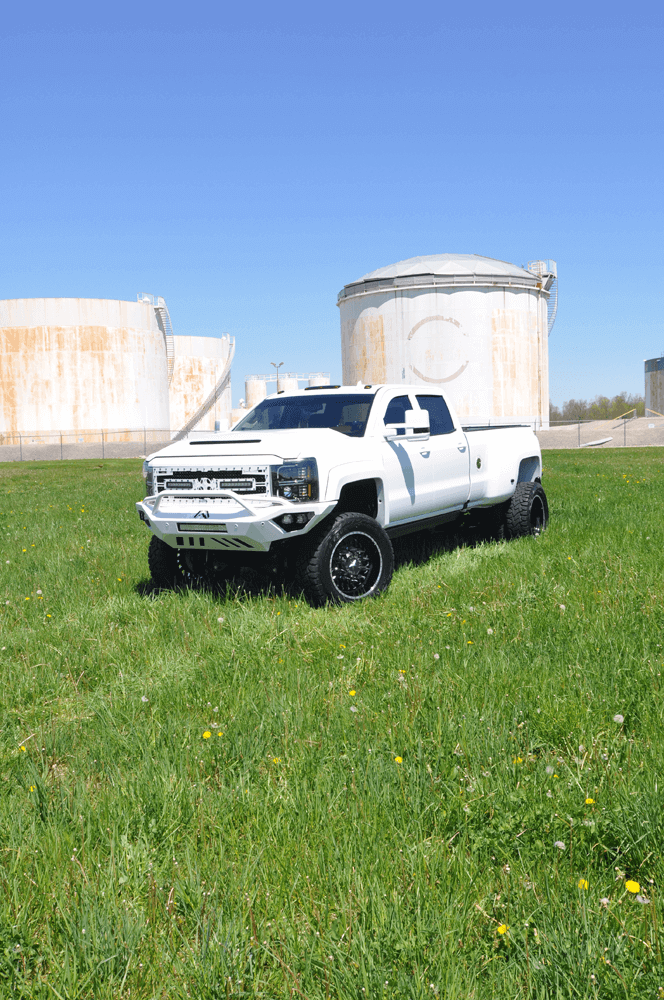 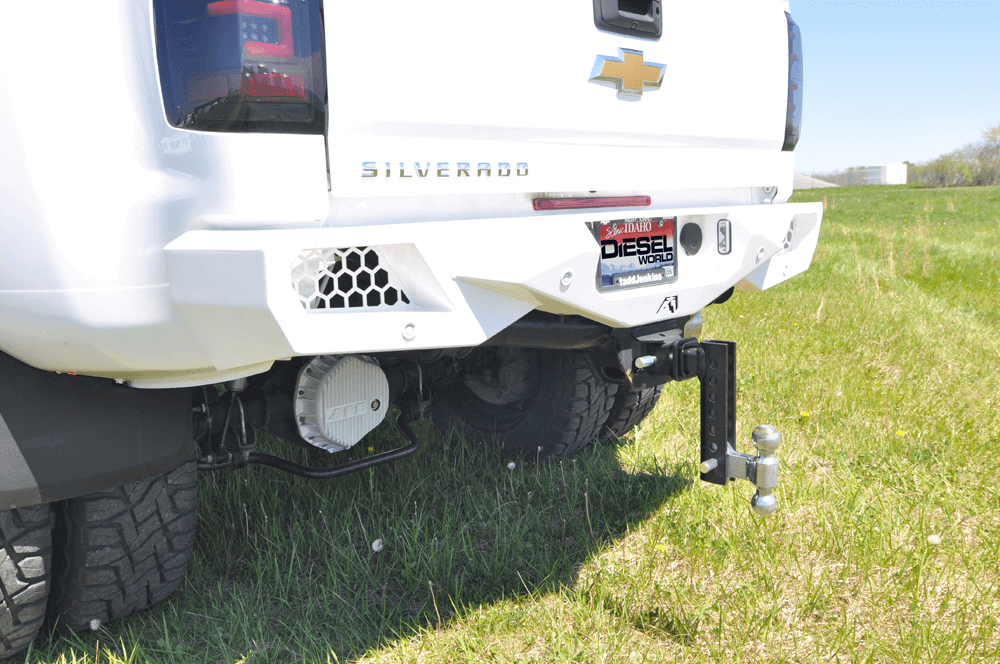 “We were headed to the first Ultimate Callout Challenge in Utah with our Superfl ow dyno when the tow truck we were using blew a piston,” Custom Auto manager Ryan Hillman remembers. “Not a hard fi x for us, but we were in a real crunch to get this dyno down to Utah for the UCC competitors to battle it out on. So, we rang up our local Chevy dealer for a quick puller. This was the only crew cab long bed dually they had, so there it was!”

After the UCC event, the boys from Idaho Falls set about inspecting their new toy. With over a decade of experience modding trucks, it wasn’t long before the Silverado was up on the lift receiving the Custom Auto treatment. “Almost before we had signed the papers on it, the truck was in our bay getting a FASS Fuel systems 95gph lift pump installed,” Hillman muses.

Over the next six months, the crew slowly transformed the truck from a daily workhorse to a showstopper. One of the first things they did was look under the hood. In addition to the upgraded lift pump, the dually sports a highflow injection pump from Fleece Performance Engineering, coupled with oversized injectors from Dynomite Diesel Products that are 40 percent bigger than stock to ensure smooth uninterrupted torque delivery. To handle all that extra grunt, a MagnaFlow 5-inch performance muffler sits out back. 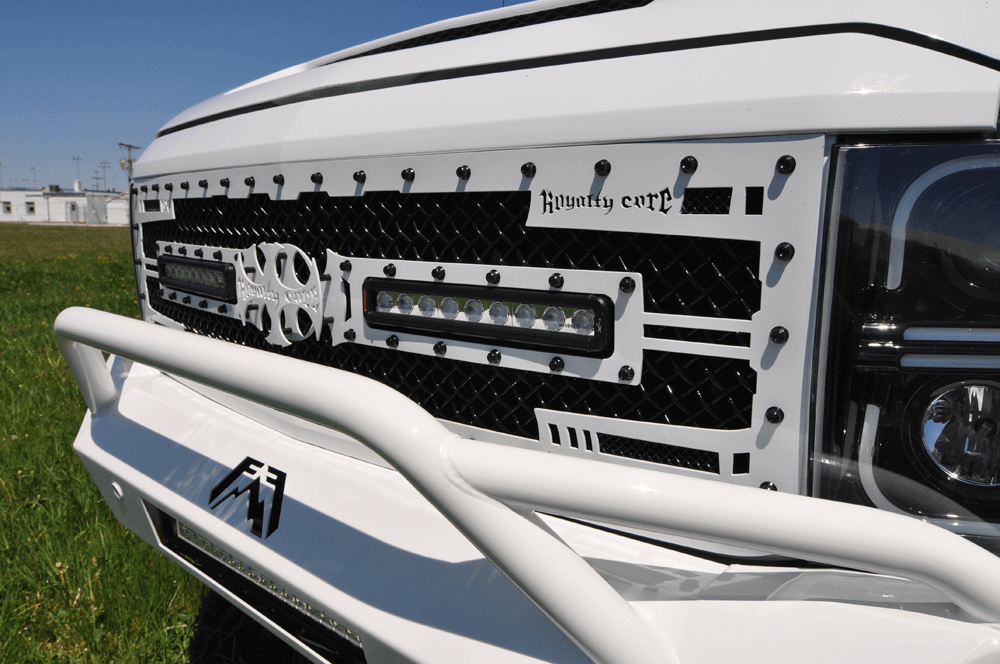 Once the internals were sorted, it was time to do the exterior. The crew tossed out the stock front and rear bumpers in favor of a Fab Fours Vengeance body kit for a more aggressive stance. A raised clamshell hood from RK Sport, along with a Royalty Core grille insert with built-in lighting, rounded out the new look.

To mount the big steed, the team outfitted both sides with automatic running boards from AMP Research, which retract seamlessly under the chassis for a nice clean look. Out back, a Roll-N-Lock tonneau covers the long bed, completing the truck’s streamlined appearance.

Inside the cabin, the factory brown leatherover- black scheme complements the truck’s stark white exterior, so the team chose to keep it stock. The sole nod to the gods of customization is an Edge Insight screen mounted near the driver’s A-pillar. The touchscreen monitor functions as both a digital gauge and as a controller for the aftermarket lighting built into the Royalty Core grille. 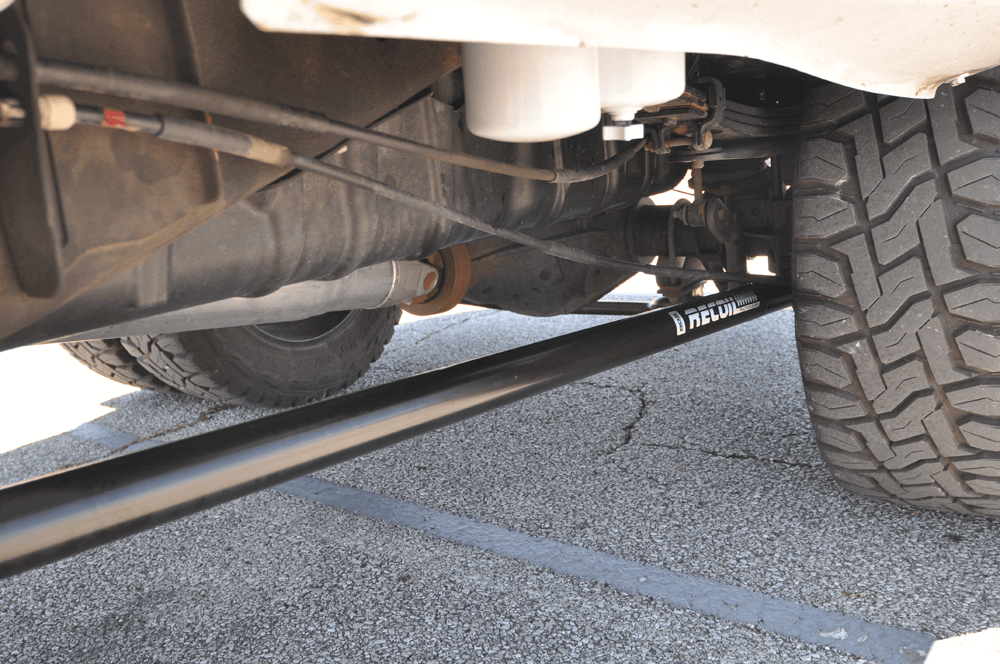 Finally came the suspension. Beneath the polished white exterior is a work-beast capable of towing the shop’s Superflow chassis dyno to far-flung events. To improve handling, the team replaced the front suspension with a 6-inch coilover kit from BDS Suspension. The rear boasts a Yukon Grizzly locker along with BDS RECOIL traction bars that can be tuned to control axle wrap. A Hellwig air bag kit and sway bar round out the suspension upgrades, resulting in a rig that’s nimble under the heaviest loads.

“A 6-inch lift on a long bed crew cab dually makes this thing is a beast, but with those parts and custom tuning from All In Truck performance, this thing moves like a dream,” says Hillman. “You would never think driving it that it was such a big truck!

With the rig finally show-ready after six months, Custom Auto called in their resident paint whiz Jeff Call to do his spray gun magic. “Jeff is our paint guru. anything you see on this truck that is paint matched was done with his touch.”

The funny thing is that white wasn’t even the team’s first choice—it just happened to be the lone long bed in the dealer’s lot. “Although it wasn’t our first choice in color, we have really grown to love the look and style the truck has grown into, thanks to the sponsors willing to jump on board with the build and Jeff’s magic touch,” says Hillman. 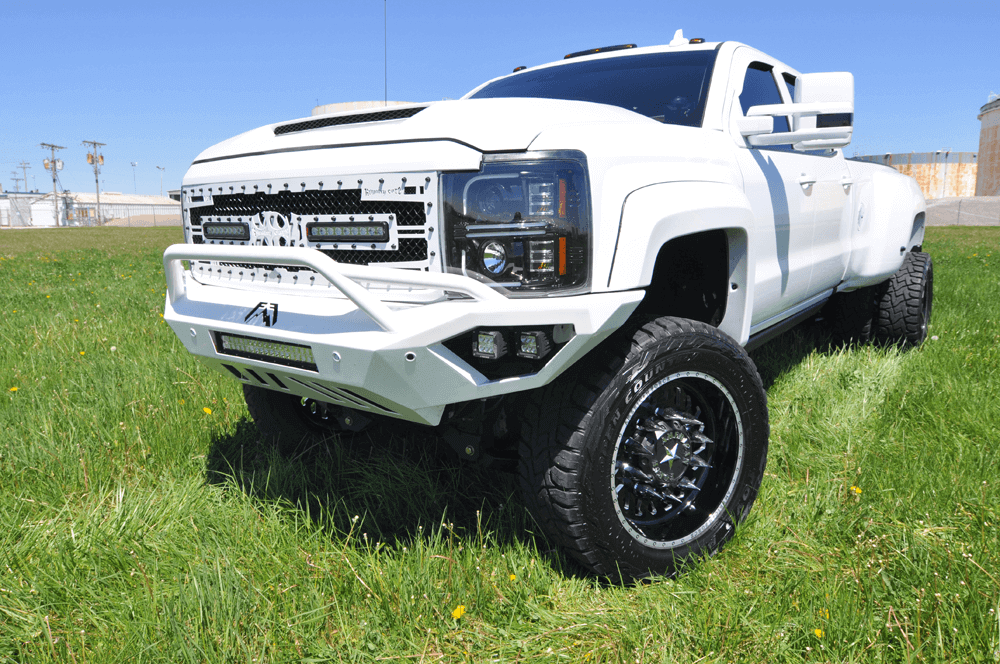 And lest you think the resulting product was destined to be a showroom fixture, much of the six-month build was actually interrupted by regular hauling duties. “I would say the biggest challenge was the fact that for a good part of the build, we still had to use the truck almost every day, “says Hillman. “The BDS Lift and American Force Wheels/Toyo tires were the last things done to it. The rest we had to do as we went, still using it every day whether it was pulling a dyno somewhere or taking kids to school. The truck hasn’t had a break!”

A garage queen, this white workhorse sure ain’t.DW