If you’ve yet to hear the name Plowboy Diesel, do yourself a favor and Google “Twin Cummins Dodge.” This small, farm-based operation is known for building one-off vehicles that combine wow-factor with fine craftmanship—and their dual 5.9L Cummins ’70 Dodge Sweptline creation brought them instant fame. More recently, Jody Mollet and the rest of the Plowboy Diesel team set their sights on another project: a gen-set engine’d ’52 Dodge B-series pickup that’s as impeccable as it is unique. The John Deere-themed build revolves around the use of a 4.5L PowerTech engine, a visual appreciation for the manufacturer’s 20 series line of tractors his family has been using for decades, and is capped off with its unexpected use of an Allison 1000.

But that’s far from the whole story. The frame, suspension, and exhaust system were built at Plowboy Diesel’s headquarters out in the middle of corn-country, and all auto body, paint, electrical, and wrenching duties were performed there, too. Jody, his father Mike, and his kids, Mallory and Dakota, were all part of the homegrown build. As is typical of so many blue-collar, self-reliant folks who’re used to working with their hands, ingenuity played a key role in the six-month undertaking. “If we need something, the first thing we do is walk outside and see what we have lying around that will work,” Jody told us, laughing. Funny thing is, he must not have been kidding—because in a lot of areas of the build that’s exactly what he did, and the truck turned out flawless.

Mistaken as a 4BT by some, immediately recognized by others, the 4.5L PowerTech makes the John Deere theme 100-percent authentic. Obtained off of eBay, the 1,000-pound, cast-iron block and head inline-four is set back roughly 4-inches for more favorable weight distribution, ultimately resting on Summit Racing motor mounts. Believe it or not, the serpentine belt system sold Jody on the engine more than anything else (many were V-belt). As it turns out, this specific PowerTech previously served in a gen-set application, which meant a governor change was in store in order to make the engine street-friendly.

Fuel system reliability checks in in the form of a mechanical injection system that’s based around a Stanadyne DB4 rotary pump. After taking a trip to Area Diesel Service, the pump’s governor was reworked for street-use, and it was also modified to flow 45-percent more fuel. The DB4 routes fuel to four mechanical injectors, which were reworked internally at Area Diesel and set for a higher, 240 bar pop-off pressure to complement the pump mods. To adequately feed the DB4, the cam-driven mechanical lift pump went by the wayside in favor of an electric AirDog Raptor 4G unit mounted along the inside of the driver side frame rail.

A small compound turbo arrangement spices things up under the hood. It starts with the factory 42mm BorgWarner S2A on the stock exhaust manifold, and is paired with a 60mm, T4 foot S300 from Area Diesel, which is ironically a turbo that comes factory on a larger John Deere application. Area Diesel also supplied the adaptors, flanges and T-bolt clamps that were used to build the two-stage system. Peak boost is unknown and probably will remain that way. After all, no 20 series ever came with a boost gauge.

The Allison transmission behind the PowerTech provides an unexpected yet welcomed surprise. Sourced from Custom Automatic Conversions, the 1000 series automatic is of the six-speed variety, and makes use of the SAE #3 bellhousing to accommodate the John Deere engine. A custom-tailored flex plate and a stand-alone controller make the use of the Allison possible, both mechanically and electronically. Gear selections are made on the steering column—by way of a repurposed 20 series throttle lever. 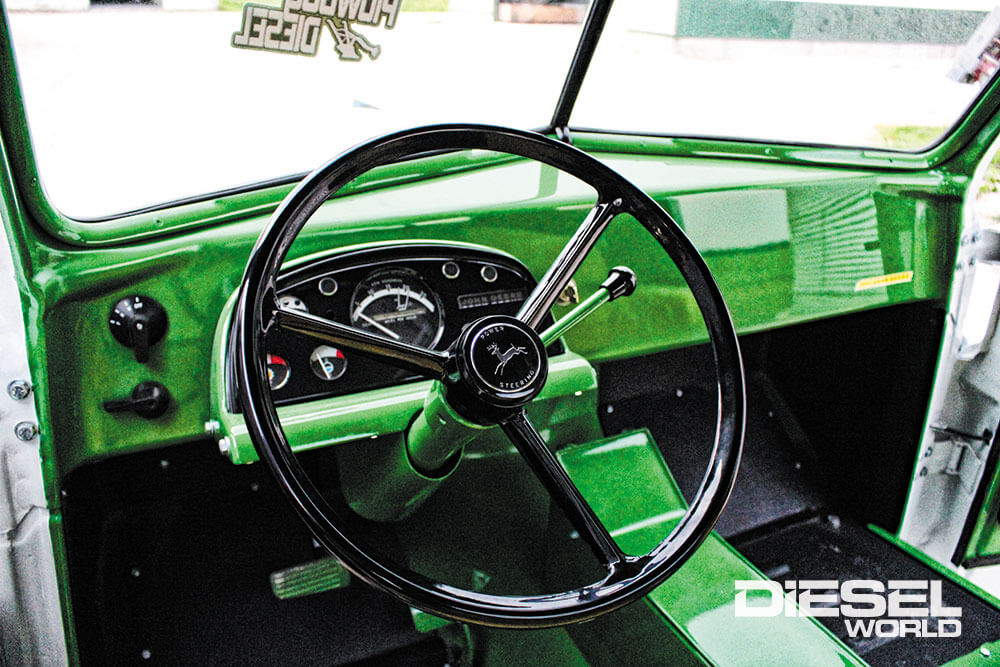 Unfortunately, a lot of the things you can’t see on the Mollet’s Dodge are some of its nicest features. Everything sits on a frame made out of 2×4-inch, 0.187-inch wall rectangular steel tubing, which integrates the factory I-beam axle up front and a Dana 70 with a limited slip in the rear. There are disc brakes all the way around, as well as air bags and a precisely-clearanced, 3-inch exhaust system culminates with a tail section that matches the contour of the rear fender above it. As for suspension, Jody built the front radius rod setup, along with the rear four-link.

Working out of a makeshift paint booth erected at the family farm, Jody shot the truck in Bright White supplied by PPG. The same PW7 paint code found its way onto the bed, bumpers, and steel wheels, while fresh John Deere green was applied to the truck’s various accent pieces. DCM Customs kicked in a host of components that were vital when reassembling the old Dodge (especially weather-stripping), along with the ’48-’53 replacement aluminum radiator that bolted right in.

Niche Enthusiast Appeal, But Appreciated By All

So how has the finished product been received by the general public? If earning four trophies at its first three shows is any indication, we’d say it’s a hit. The attention-to-detail and craftmanship is apparent to everyone that is lucky enough to see the old Dodge in person. However, farmers and other tractor gurus are the folks who truly understand the build. “We mostly notice the guy who is likely a farmer and knows a 20-series tractor,” Jody explained. “They usually have a huge smile on their face when they see it, and that’s priceless. It’s so gratifying to see someone appreciate what you’ve done, and get it.” From truck people to tractor people to car people, and those that are into all three, Plowboy Diesel’s latest creation is quite a catch, and may even prove to have just as much staying power as their twin-engine truck. After all, there is no shortage of John Deere fandom. 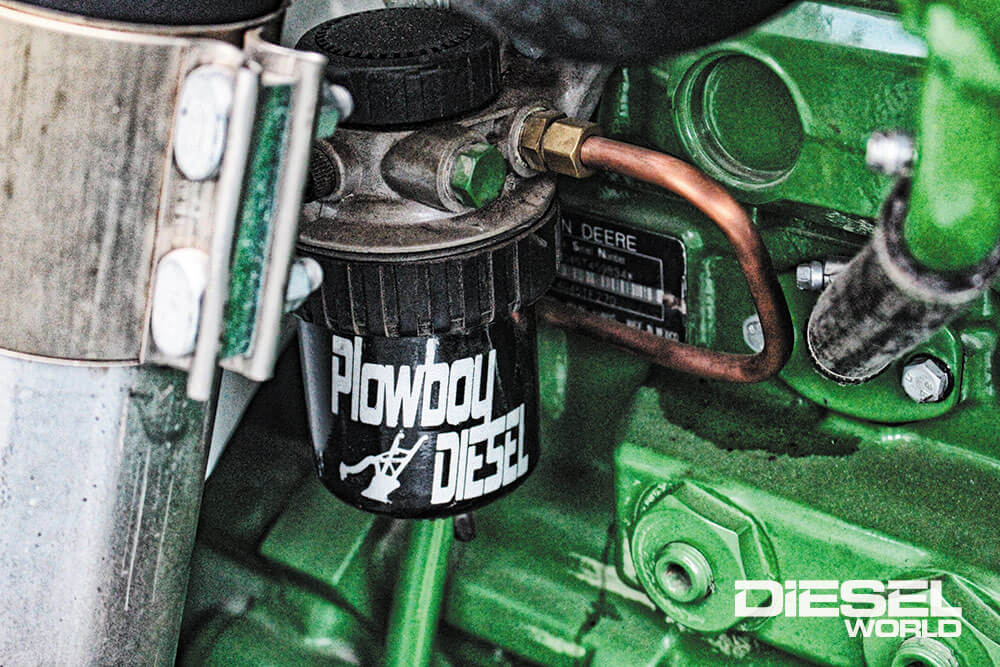 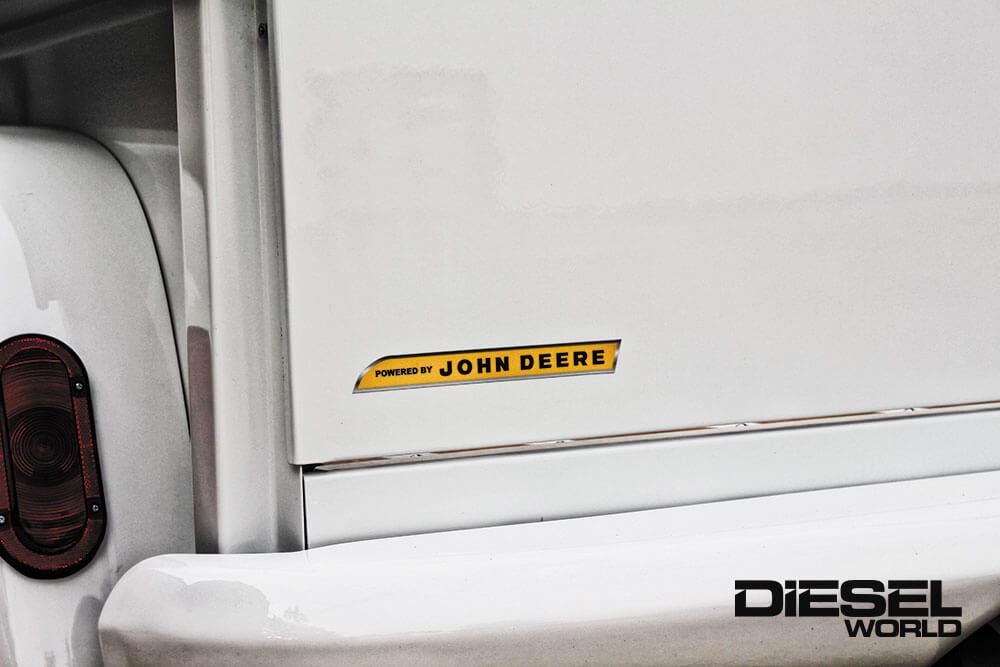 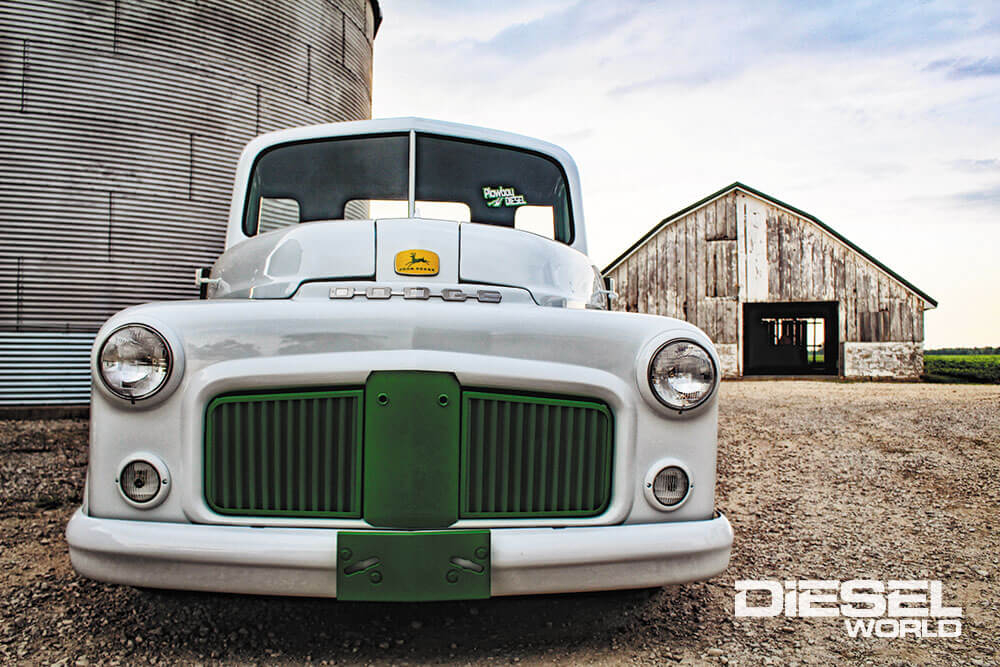