Well, it’s not a diesel, but it runs on fuel oil. Kerosene to be exact. Kerosene became a popular fuel for early tractors because it was so inexpensive. Later, a similar, slightly more refined fuel called “distillate” or “tractor fuel,” replaced it. Because kerosene, distillate and diesel fuel are so similar, and the early kerosene engines are on the diesel-engine historical family tree, we thought you might be interested in reading about one of the pioneers in that realm, Advance-Rumely.

The Advance-Rumely company dates back to 1848, when Meinrad Rumely emigrated to the U.S. and joined his brother, John, in LaPorte, Ind., to run a blacksmith shop and foundry. Meinrad soon bought his brother out and called the firm M. Rumely Company. At first, the company mainly served the railroad, but due to local demand, it began designing and manufacturing agricultural equipment.

The company’s corn shellers and horse-drawn threshers were successful enough that it expanded its agricultural product lines and sales regions. Eventually, it expanded to include the U.S., Canada and the world. The M. Rumely Company became very successful and grew by buying up other companies with complementary equipment lines or markets. Meinrad died in 1904, but his sons, William and Joseph, continued and grew the company further.

In 1895, Rumely started in the tractor biz by building steam-traction engines. In 1908, responding to the new trends, Rumely hired engineers John Secor and William Higgins to design and build a line of internal-combustion tractors. These guys had studied with the great European engineers, including Dr. Rudolph Diesel, and had ideas on how to bring kerosene-fueled engines to America.

Their first prototype tractor was built in 1909 and nicknamed, “ Kerosene Annie.” Annie led Rumely to become the first American tractor manufacturer to use kerosene as a fuel. It put them at the head of the sales pack, as it was an easily and cheaply obtained petroleum-based fuel.

The company’s original Model E made 30hp on the drawbar and 60 on the PTO. A number of tractor companies used these designations, but as with the American horsepower races in the ’50s and ’60s, some of the numbers became inflated, which is why the Nebraska Tractor Tests began. It was an official “put up or shut up” moment for the tractor biz.

Called the “Oil Pull,” the Rumely tractors had many unique features beyond the kerosene fuel. For one, they were cooled by oil instead of water. That’s right, the engine used oil as a cooling medium. There were four generations of Oil Pull tractors built from 1910 to 1930.

The 1923 Model H 16-30 you see here was in the second generation (1917 to ’24), and built near the end of that generation. The upgrades in the second generation included a general downsizing and lightening, a two-speed gearbox replacing the previous single-speed, smaller displacement engines, and automotive-style steering rather than fifth-wheel steering. Though the engines tended to be a little smaller in later years, they turned more rpms and made more power.

In many ways, early kerosene-fueled engines were a parallel development in the march towards practical diesel power. The Rumely family, as well as their engineers, Secor and Higgins, all had known Dr. Diesel, and were familiar with compression-ignition engines, as well as hot-bulb semi-diesels. Building a diesel engine in those days was an expensive, complex proposition, and the maintenance and operational needs were equally complex. The Rumley engineers took a side track by combining elements of compression-ignition and spark-ignition engines.

At about 5.5:1, the Rumely engine had a higher compression ratio (CR) than most gas or kerosene engines of the day, but not so high as a diesel or even the low compression diesels of the day (over 10:1, but well under 15:1). As a comparison, a close period competitor was the Waterloo Boy Model N kerosene tractor, which had a 3.91:1 CR.

Rumely’s take was to heat the kerosene with a higher CR low-volatility kerosene (so it was well heated by compression), but then, fire it off with a spark-ignition system. It was inexpensive to build, but had a power edge. The Rumely kerosene engine had few needs beyond the realm of what was required by a gasoline engine, but the main benefit was that it ran on the cheapest fuel available at the time. The key was the complex three-way carburetor, patented by Secor and Higgins, which combined gasoline—and water. This was Rumley’s “key to the kingdom.”

The combustion chamber of a kerosene engine needed to be good and hot. For that reason, they would not start cold, but had to be started and warmed up on gasoline. As soon as it was warm, it was switched over to kerosene. Some of the early diesels did the same thing. The kerosene itself was preheated for better combustion by running the fuel line through the exhaust pipe.

“The kerosene itself was preheated for better combustion by running the fuel line through the exhaust pipe.”

How was water involved? On light loads, the engine ran only on kerosene. With heavy loads, the higher compression ratio and, likely, the combustion characteristics of the kerosene, combined to create a very hot combustion process. As the load increased, an increasing amount of water was injected into the airflow. It then vaporized, cooled the combustion chamber—preventing detonation—and prevented carbon buildup. The water tank held 15 gallons, which had to be soft water; the kerosene tank carried 23 gallons. 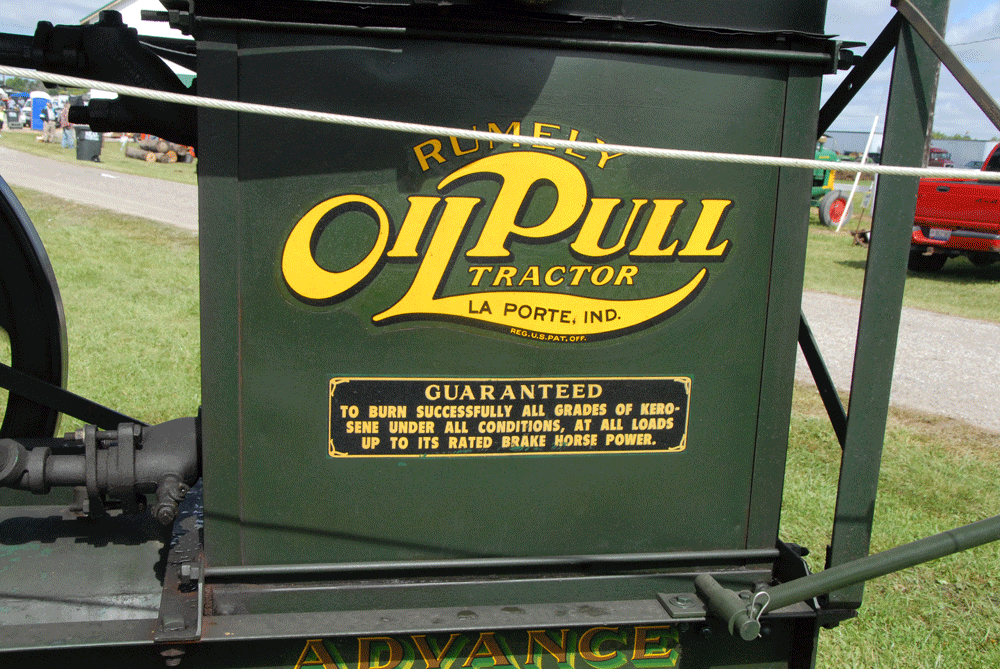 The turn of the 20th Century had brought Rumely to new heights with its many corporate acquisitions. Those acquisitions, and a 1913 downturn in the agriculture market, likely pushed the company to the edge of a financial cliff. It scrambled, and even hired an International Harvester executive to run the company for a while—all to no avail. By 1915, Rumely had declared bankruptcy and was reorganized as Advance-Rumely. Ironically, the Rumely family was pushed out of their leadership positions, but the company continued to charge ahead.

Advance-Rumely was hit hard by the ’29 Great Depression, a bit more than a decade after the bankruptcy. A downturn in sales predated that, which has been generally attributed to its “old-style” two-cylinder tractor lines. By the late ’20s, the company was in the process of introducing more modern and conventional tractors, but it was too late. In 1930, management started looking for a buyer, and in May of 1931, Allis-Chalmers stepped in to buy the company.

Since A-C had its own brand of tractors, it discontinued the Rumely units immediately, but used the LaPorte factory to produce some of the A-C model line. Allis-Chalmers was most interested in Rumely’s thresher line, which it took over intact and rebranded, as well as Rumely’s extensive dealer network. The Rumley name was seen a bit longer on the thresher lines, into the late ’30s, and mostly in Canada. By the end of the ’30s, Rumely was simply a memory.

Rumely is a well-known and highly regarded tractor in the tractor-collecting world. Along with its gasoline Gas Pull tractors, many were built and they are fairly numerous yet today DW.

*As Rated by Nebraska Tractor Test 9 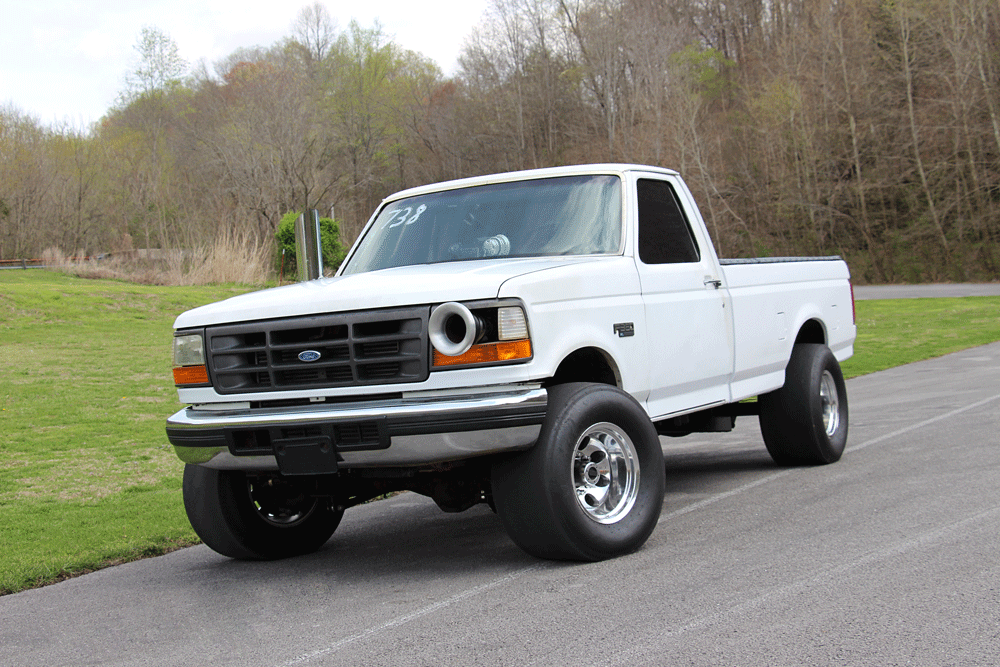