Some people are just always able to get what they want, whether it’s in business, relationships or hobbies. Some of these guys are so good at it that they don’t even want you to know their last name. There’s this guy we’ve heard about that goes by the moniker “Junior” and that’s it. We don’t know his last name and the legend is that you don’t need to know it either.

Well, Junior is pretty successful in getting what he wants and he happens to like big-horsepower diesel pickups. He has had Rebel Off Road in Laguna Hills, California, build him some off-road vehicles in the past and everything turned out great so when it came time to build up this 2007.5 Chevrolet Silverado 2500HD, Rebel got the nod.

When all was said and done, Junior wasn’t completely sold on the engine. It just didn’t have the muscle he wanted. So he bought a Duramax engine from Pacific Performance Engineering that was previously used in a record-breaking land speed run on the El Mirage dry lakebed in California. That engine put out more than 1,000 horsepower to the wheels with a dual-stage Nitrous Express (NX) nitrous setup and propelled the truck it was powering to 141.998 mph… with a trailer attached. Who buys an engine like that for their truck? Guys like Junior.

He doesn’t drive the truck on the street but he sure has fun with it. So, let’s talk about that engine for a bit. Knowing that it was going to be putting out big horsepower numbers, the very first thing PPE did was order up a slew of ARP bolts, studs and nuts, primarily for the heads and main caps. Then the heads were ported and polished to Stage 2 levels. A set of beehive-style valve springs and titanium retainers were also added to help keep the upgraded valves in place with the added horsepower.

A set of 15.5:1 Mahle pistons attached to a set of Carrillo forged rods were used to handle the power.  Since the engine had originally been installed in a 2006 GMC, installing it in this 2007 Chevy revealed a fitment issue with the smaller engine bay. Fitting smaller turbos than were used on the record-setting run was necessary, so the huge GT4202R and GT55 were swapped out for PPE’s smaller compound turbo kit, which utilizes Garrett GT4094R and GT45 turbos. As it turns out, this unplanned swap was a good thing as this setup will spool much quicker when compared to the larger set that was designed for high-rpm power. For off-road racing, a quicker-spooling set of twins just makes more sense. Netted horsepower is less, but not by much.

Exergy Engineering injectors were installed to increase the fuel flow by 100 percent over the stock setup. To feed the new larger injectors a PPE Dual Fueler kit was bolted up, which added a second belt-driven Bosch CP3 fuel pump. A Snow Performance water methanol injection was also added by Rebel Off Road, after the engine was installed, to provide a bit more fuel, lower EGT and to help spool the turbos.

The exhaust was treated with a thermal wrap to reduce under-hood temperatures and decrease turbo spool time. PPE installed its own manifold and up-pipes, and a Banks charge air cooler keeps intake temps down. A 4-inch Flo-Pro exhaust system was used on the pickup as well.

To handle all that horsepower and torque, PPE put in one of their Stage 5 transmissions with a triple disc converter, which is coupled to an Atlas two-speed 4:1 transfer case and JE Reel 1350 custom drivelines which were installed by Rebel. A Dynatrac high pinion Dana 60 front straight axle swap (35 spline) was installed, along with ARB air lockers in both the front and rear differentials. To help spin the massive 42-inch tires, 4.88 ring and pinion gears were used.

Now, this truck isn’t just drivetrain and has plenty of other parts on it thanks to Rebel Off Road, so let’s take a look at the rest of the vehicle. The suspension was beefed up with some very sophisticated parts in a sort of hybrid way. The stock suspension was removed all together and a solid axle swap was performed. On top of that, a full 12 inches of lift was added. Rock Krawler provided the rear suspension while ORU (Off Road Unlimited) had just the right parts for the front. King 2.0 coilover shocks were used (10-inch front and 12-inch rear) and removable rear bumpstops and air bags from Rebel Offroad help out the rear. A Warn compressor and five-gallon Power Tank ensure there’s always adequate air for the bags, plus the front and rear of the truck has air hose plug-ins for inflating tires or running air tools.

With all that room in the wheel wells provided by the lift, Rebel Off Road chose to fill it with race-ready 42-inch BFG Baja T/A KR race tires mounted on 20-inch TrailReady HD Beadlock wheels with slim rings. Behind the wheels are Wilwood 16-inch rotors and six-piston calipers to ensure that all the rotating inertia can be slowed down in a hurry.

Road Armor bumpers, both front and rear, were installed on the Chevy and each received a 16.5 Warn winch just in case the truck ever gets stuck (more likely it will be helping some other poor sap get out of a jam). A TireGate tire carrier allows a full-sized spare tire to be carried on the truck since it often finds itself in remote areas where no help can be  expected. If help does needs to be summoned, the Klein Shocker train horns can be heard from miles away. There’s not much chance of the truck running out of fuel as a 45-gallon TransferFlow mid-ship tank was installed (after some minor modifications to fit around the transfer case).

Not everything on the 2500HD was selected for its brawn; some things were picked for their beauty… like the RBP grille. Okay, we lied. That’s the only beauty part. The Truck Covers USA bed cover might be pleasing to the eye, but it’s as tough as the rest of the truck and protects things in the bed.

You could call this a rolling R&D truck with all the cool stuff it has. Junior just calls it “Big Red.” 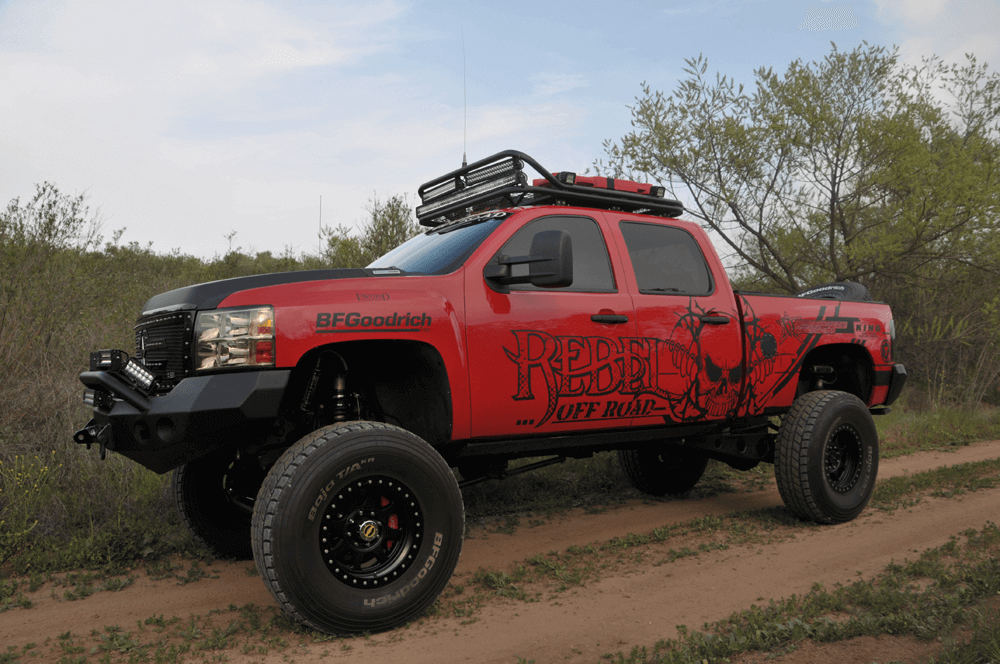